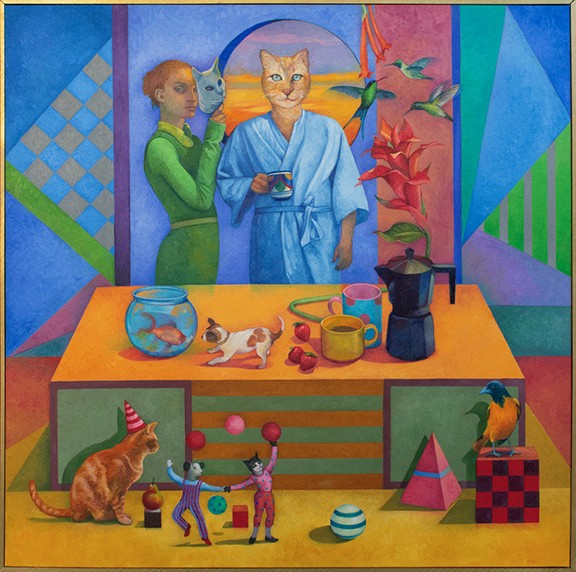 Pop-up Gallery: Painter John Obuck
Through Saturday, Nov. 16
Etherton Gallery, 135 S. Sixth Ave.
11 a.m. to 5 p.m., Tuesday through Saturday. Closing party 3 to 5 p.m. Saturday, Nov. 16
Free
624-7370; ethertongallery.com
EXTRA: A Fundraising Auction for Dr. Scott Warren. Donated photos by 11 Arizona photographers are available through a silent auction to raise money for Warren, a humanitarian activist with No More Deaths who goes on trial Nov. 12. The photos are on view at the gallery and on the website. Bids may be made now through the closing reception, Saturday, Nov. 16, via phone, email, website, Instagram and Facebook. Opening bid prices are set at 50 percent of market value
Who wouldn't want to live inside Gail Marcus-Orlen's head?

Or inhabit her dreamscape?

If you did, you could dwell among blue peacocks, nap inside a giant pink rose and dance with an elegant gentleman cat.

And perhaps best of all, your life would be saturated with the most blissful of colors: sunshine yellow, spring green, autumnal orange, lovely lavender and the aforementioned rosy pink and peacock blue.

Marcus-Orlen, a long-time local painter, has always been a consummate colorist and a magical realist, making oils on canvas that dazzle the eye and the imagination. One of the first painters to show her work at Etherton Gallery, Marcus-Orlen has taken us over the years on magical mystery tours through classical architecture, green New England landscapes and the hot lands of the Southwest.

But most often she stays inside, turning domestic life into something enchanted.

That's what she's done in Bright, the gorgeous group show of colorful works three artists; it ends its run at Etherton next week. Marcus-Orlen's new paintings are almost all set in the rooms of a house. But the place is far from being a domestic trap. Nature comes right inside.

Birds of all feathers fly past walls deeply pigmented in rose and blue, windows let in sunshine by day and starlight at night, and cats and dogs and happy humans are everywhere.

The days pass idyllically in this wonderland. Break of day finds us in "Bed of Roses," a sunlit bed strewn with pink roses and flanked by a red cardinal on one side and a mellow cat on the other. "Morning Coffee" is also a pleasant affair: a couple in bathrobes, woman in green, gentleman cat in blue, drink their brew while birds sail around and two tiny acrobats ring in the day on the floor.

By nighttime, in "Shall We Dance," the lovebirds—cat and human—do a slow dance while the full moon rises.

The Bright show also displays Andy Burgess' joyous prints of mid-century modern houses, all of them bursting with neon color. An Englishman who fell in love with the hot colors of the Southwest, Burgess is also entranced by the mid-century modern houses in California and Arizona. Many of them pure white or concrete gray, but Burgess has painted them in every color of the rainbow.

His exhilarating oils and acrylics of these prized houses were shown at the Tucson Museum of Art last year but for the Etherton exhibition Burgess reproduced the paintings as archival pigment prints.

Even so, these cool houses glow in hot hues. "Wexler 1961 Steel House" is a stripped-down abstraction of the home's alluring geometries; its rectangles and stripes are loaded with salmon and blue. "The Green Pool" is flush with salmon too—as well as teal green.

The inventive Burgess also has fun with pure abstractions in acrylic on panel, each one a study of fuchsia or turquoise.

The third Bright artist, Michael Chittock, has made mixed-media narrative paintings of New Orleans Nights. He uses an unusual palette of black, white and gray shot through with patches of pink and yellow. These fluorescent colors capture the artificial lights of the city by night.

Chittock's small paintings are like snapshots, offering up fleeting glimpses of African Americans in NOLA after dark. Pictured in loose, quick strokes of the brush, women and men stroll down the crowded streets or stop in bars. Others pick up groceries and still others gaze at the old city from atop a roof.

Set on small shelves, row on row, one after another, the little paintings morph into something much bigger: the dozens of people in them become multitudes, a host of humanity living lives big and small.

(Separate from Bright is the Pop-Up Gallery exhibition in the back of the gallery, this time hosting John Obuck, a New York painter artist who explores patterns and textures in oils on canvas.)

The cheer of the Bright paintings feels healing in this time of national despair. But the photography mini-show that has just joined that exhibition shines a different kind of light: it's a tribute to heroism in dark times, honoring the courage of border activist Dr. Scott Warren.

The photos have been donated by 11 distinguished Arizona photographers, many of whom have made works about the borderlands. Their photos will be sold through silent auction to raise money for Warren, an activist with No More Deaths who is facing federal charges of felony harboring for giving aid to desperate migrants in the desert.

His first trial ended in a hung jury in June; he's being tried again starting Nov. 12.

As Warren has said, the deaths of migrants have only continued since he was arrested in January 2018. Between his arrest and the end of his first trial in June, 88 migrant bodies were found in the desert. In the months since then, at least 58 more migrants lost their lives in Arizona, bringing the grand total up to more than 3000 dead in our state since the turn of the century.

Organized by photog Richard Laugharn, the auction features works by Mark Klett, Kate Breakey, William Lesch and others. The gallery is donating a civil rights photo by Danny Lyon.

Photog David Taylor, a UA prof, has recorded the scars etched in the land by the border wall. And Tom Kiefer's poignant photos document the personal belongings of migrants that have been confiscated and trashed by Border Patrol.