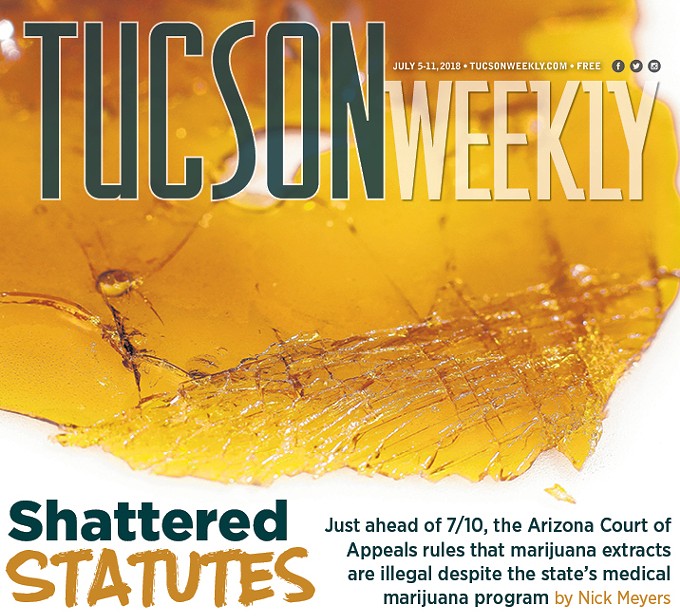 BigStock
Once the plant material is removed, marijuana extract is mostly THC.

But don't panic yet. Industry insiders and professionals seem to have arrived at the consensus that the court made such a terrible decision that the Arizona Supreme Court will reverse it, and extracts will remain on the shelves in the meantime.

At press time, the Pima County Attorney's Office has not responded to requests for comment on the case.

"This was like a nuclear bomb going off," said Gary Smith, president of the Arizona Cannabis Bar Association.

While the decision to appeal to the Arizona Supreme Court lies with the defendant, the Arizona Cannabis Bar Association has already reached out to offer assistance in the appeal, Smith said.

An attorney who filed an amicus brief for the Court of Appeals case told the Associated Press that the parties intend to file an appeal.

Mikel Weisser, director of Arizona NORML, is confident that the Arizona Supreme Court will rule in favor of cannabis extracts for the medical marijuana industry.

"Cannabis will prevail," he said. "I cannot see us losing—it doesn't seem like a logical conclusion."

Extracts in the cannabis industry have many names—shatter, wax, oil—but nearly all are derived from a process called hydrocarbon extraction.

Hydrocarbon extraction requires the use of propane or butane as a solvent that separates the compounds in cannabis from the plant material. Once extracted, the solvent, usually butane, is burned off in a low-heat oven and the concentrated compounds remain.

From there, depending on how the extract is processed, they can be used in their concentrated form for smoking and vaping or get added to a recipe to create edibles. The versatility of concentrates make them a widespread favorite among dispensaries and patients alike.

The Marijuana Industry Trade Association intends to work with the families of children who rely on medical cannabis to file an amicus brief on their behalf, said Demitri Downing executive director of MITA.

Two dispensaries, Downtown Dispensary in Tucson and Harvest of Arizona, with locations in Phoenix and Tucson, have released statements disparaging the decision and asserting that they'll continue to carry concentrates.

The Court of Appeals decision hinges on a legal discrepancy between the definitions of "marijuana" and "cannabis."

The Appellate Court decision refers to the Arizona Medical Marijuana Act definition of marijuana, which refers to "the genus cannabis" and defines "usable marijuana" as "the dried flowers of the marijuana plant, and any mixture or preparation thereof."

Court cases concerning concentrates often cite the clause, but judges and lawyers rarely seem to come to an agreement on what the clause means. To most people who work in the industry, the clause undoubtedly protects concentrates as a "preparation" of cannabis.

"I think the discrepancy between the legal definitions of 'marijuana' and 'cannabis' needs to be clarified," said Aari Ruben, owner of Desert Bloom Re-Leaf Center. "The idea that they're two different things is ridiculous on the face of it."

However, the Arizona Attorney General's Office argues that "possession and use of cannabis is not protected by AMMA because it is neither marijuana nor a preparation thereof."

The state defaults to a 1973 definition of cannabis as "the resin extracted from any part of a plant of the genus cannabis."

According to the court's opinion, the AMMA does not overwrite the definition of cannabis under state law. Cannabis, meaning just about anything other than bud, remains a "narcotic drug" according to the state's drug schedule.

Furthermore, the court states its "primary objective" is to support the intent of voters who approved the AMMA and does not believe extracts were considered when voters legalized medical marijuana in 2010.

Judge Jon Thompson, who delivered the opinion, wrote that if voters wanted to legalize extracts "they should have said so." He wrote that the court couldn't conclude voters intended to legalize anything but the "dried flowers of the marijuana plant."

"As a person who did vote for it, I believe that to be true because of the phrase 'any mixture or preparation thereof,'" he said. "That seems pretty broad to me."

The case centers around Rodney Jones, a Yavapai County medical marijuana patient who was arrested in 2013 at the Prescott Resort for possession of .05 oz. of "hashish" in a jar.

Jones was sentenced to two-and-a-half years in prison.

"I'd be shocked if he decided to leave this alone," Smith said. "He just ate a conviction where he should not have been convicted."

Smith said he was disappointed in the ruling but appreciates the opportunity to advance cannabis knowledge at such a high level and repair some of the "damage" caused by decades of "propaganda."

He said the court seems to misunderstand the application of concentrates in today's industry, noting that part of the opinion mentions "the combining of marijuana with non-marijuana elements to make 'consumables' such as brownies."

"Back in the day, that's probably how your grandpa made his brownies," Smith said. "But nobody makes them that way anymore, not for 30 years."

Moe Asnani, owner of Downtown Dispensary and D2, contends that the specific product of "hashish" the Court has outlawed doesn't exist in today's dispensaries.

"We don't even have any products like that," he said. "If you look at most dispensaries' menus, you won't find hash on there. It's not a popular product."

Asnani said the extraction methods today don't necessarily require much separation and include other components of the plant such as cannabinoids (other than THC), lipids and terpenes.

Nonetheless, Asnani hopes to join the fight against the decision, stating that dispensaries will be involved, and amicus briefs will be filed.

"We're definitely not just going to let it sit," he said. "It creates the potential for madness, so we need to get it under control."

Asnani believes the Arizona Supreme Court will determine that marijuana and cannabis are identical and won't rule in favor of the prosecution.

His concerns also lie with patients, another reason he said he's seeking involvement.

Concentrates play an important role in prescribing medical cannabis to patients, said Dr. Heather Moroso, NMD, at Moroso Medical Center. Not only does it offer an alternative to people who don't want to smoke, but is paramount in precision dosing, such as in edibles or tinctures.

"I think it's total idiocracy," she said. "Little kids aren't going to be rolling joints to help prevent seizures."

She recommends concentrates for all sorts of medical uses and said removing concentrates from the table almost entirely removes the medical side of cannabis.

"Even in my ability to help people, it takes me down light years," she said.

In their statement, Harvest of Arizona argues for the necessary medical role of concentrates for patients as well as for patients' right to medicate under the AMMA.

They said the court's ruling "subjectively discriminates against certain populations of qualified medical marijuana patients" and that patients deserve protection instead of prosecution.

Apart from an Arizona Supreme Court decision overturning the interpretation of the Appeals Court, the remedy for this kind of situation lies in the legislature where lawmakers can clarify the law before it goes to court.

During the 2018 legislative session, Rep. Pamela Powers Hannley, D-Tucson, drafted a bill that would have replaced every instance of "marijuana" in the AMMA with "cannabis," rendering the state's former definition of cannabis obsolete.

She believes the court decision constitutes an "oversight in the law" and that the state should have accounted for different types of marijuana products rather than "splitting hairs."

Powers Hannley has supported medical cannabis use in state legislature, especially for its role in addressing the opioid crisis.

"I don't know how many times I said, 'It's a plant that never killed anybody,'" she said. "But, you know, they get all 'Reefer Madness' on you."

MITA plans on working with Powers Hannley to introduce legislation next year that will address the confusion around concentrates, among other issues in the program, such as card costs and lab testing.

Some feel the decision may have ulterior political motives outside an objective reading of the statutes.

Marc Victor, president of Attorneys for Freedom, a firm that often handles marijuana cases, said the judge in the Yavapai County Superior Court hearing, Tina Ainley, has a reputation for handing down harsh sentences.

"I think that this is a horrendously wrong decision," he said. "This is a case of statutory construction."

Despite the original definition of cannabis in Arizona law, Victor said the legal definition typically defaults to the AMMA. He said it doesn't make sense to list cannabis next to methamphetamines and cocaine.

"Our state is an embarrassment in terms of cannabis," Victor said. "We treat this as a class four narcotic drug and it's just part of the marijuana plant."

Yavapai County Attorney Sheila Polk, whose office initially prosecuted Jones, has a history of being unfriendly toward marijuana patients. Powers Hannley recalled a "dust-up" they had during a legislative committee hearing in which Polk was "bad-mouthing" patients.

Another industry representative referred to her as a "tyrant."

The effort saw support from Gov. Doug Ducey, who raised funds to help defeat the measure.