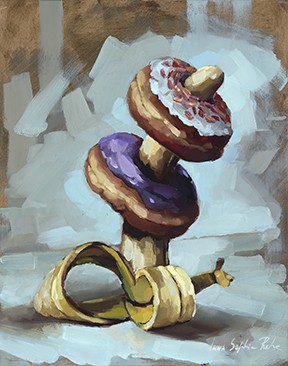 Consider the Tucson Erotica event, which kicks off this Saturday, March 3, at 7 p.m. at the Sculpture Resource Center, 640 N. Stone Ave., your chance to be reminded that sex can be beautiful, visceral and, well, really great.

At the eighth incarnation of this annual event, you'll see more than wall art. With burlesque performances by Nikki Riot, Trixie Phillips and Fiametta Mink; live music by DJ Vamp Feline, DJ Ricky Strange and the band Short Notice; and live body painting by Tucson artist Adela Antoinette, it's almost like the art will be coming to life.

That's only fitting for many of the artists participating in the event, for whom art is a source of life. One such example is Inna Rohr, who's participated in Tucson Erotica for the past four years.

Not all of her art is erotic—she's painted the interior of a rest stop bathroom, still lifes, city streets on rainy nights and portraits (both human and animal).

"I'm really fascinated by what makes humans humans, so a lot of my paintings express that, like being human," she says. "Obviously, sex is a big part of that."

She started painting when she was a kid in Estonia, and finished two different art schools, but wandered away from art for a number of years. Whens he found her way back to painting just a handful of years ago, she was using art as a sort of therapy. Much of it stemmed from her own negative sexual experiences like those now being brought to light through the #MeToo movement. She's had people tell her her art looks "anguished," and she's been surprised to watch her style evolve away from that dark place as the art helps her heal.

"It's been a beautiful journey just to paint it all out and then to move on to lighter things," she said. "I've always, kind of in spite of the experience, felt [sex] is a very beautiful part of being human, and it can be very healing. You can either be destroyed by something or be healed by it."

And the healing isn't only for her.

"Every once in awhile, there would be a person that wants to talk about a piece," she said. "That's so incredible, and that's a beautiful experience. That's when you realize your art did something, opened up that dialogue."

"When you look at my art, the image stays with you," he says. "It stays with you because you get struck by a rendition of sound, of texture, of states of chaos."

The paintings on his website are accompanied by fascinating descriptions, like "A Violent Affair" (acrylic on paper, 16x20, $800), where he writes that he's fascinated by a common theme in Japanese cinema of intertwining death and sex.

The thought and reflection that goes into the work of artists like Rohr and Martel is part of what makes them beautiful, but Dianna Taylor, who manages the Sculpture Resource Center, says the art ranges widely in scope.

"We are looking for all things erotica, no specific style, although every year there seems to be a similar type of theme (besides the obvious erotica) that makes itself present, which is kind of cool," she writes in an email. "Our works range from one liners to very moving and complex themes about love and sexuality."

"Everyone who comes to the show is ready to see something naughty," she says.