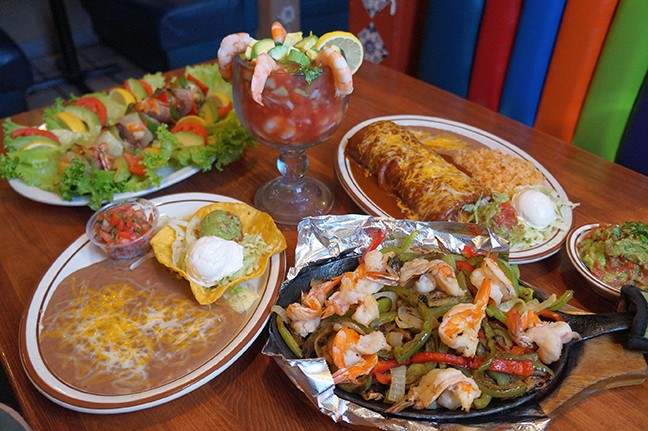 Like all good Tucson transplants hankering for touristy things, I wanted to visit the restaurant Bill Clinton bellied up to during his campaign tour. The food was pretty good, and the place was packed. Was it due to the 42nd president ordering a hefty plate of various specialties (which now is a menu staple)? Not sure, but as we exited, I noticed a larger Mexican eatery across the street. I made a mental note to check it out.

It took about a year, but when I stepped inside, I was immediately transported back to all of those hanger-sized Mexican restaurants that dot a good portion of my Southern California hometown. On this particularly drizzly day, the sizable dining rooms were buzzing with families eating colorful Mexican fare from platter-sized plates, slurping generous servings of albondigas and drinking margaritas out of massive goblets. This, I thought to myself, is a joint I could easily get used to.

Plus, the food was really tasty. Comforting, even. There might be constant lines to get into their neighbor's restaurant, but there's always a table waiting for me at Guillermo's Double L. Mainly because there are so darn many of them.

A recent visit to Guillermo's supplied me with not only a lunch I took half home with me but some interesting news: They were turning 70 this month. To me, in a desert environment brimming with some of the best Mexican food in any state or region, getting to platinum status is reason to stand up and applaud. Or at least write about.

Over coffee in one of their spacious booths, I sat with owner-in-training Edgar Gonzales to get to the bottom of the whys, hows and, most importantly, who's of Guillermo's Double L's long-lasting success. I mean, this place opened up when Truman was in office. Truman!

Gonzales told me his uncle Antonio bought the restaurant from a man named Bill Ford, whose father originally opened it. Antonio decided to name the place after Bill, "so that's the Guillermo in our name. You know, William."

Uncle Antonio was a Los Angeles transplant who opened up Crossroads, El Dorado and a few other spots that didn't work out.

"With Guillermo's, he is sort of like Willy Wonka and I'm the kid taking over the chocolate factory," Gonzales says. "I am learning everything from him as he is investing a lot of his time to guide me into taking over."

Gonzales loves seeing generations of families come through the doors.

"What I love is that we get grandparents as regulars that said Guillermo's was their first job like 50 years ago," Gonzales says. "And their kids started coming here, sometimes even working, and now they bring their kids in. Everyone here, customer or employee, has been coming here for generations. Just like me. This is all I know. This is what I do. As long as I am in good health and living, working in Guillermo's is what I want to do."

Outside of the extremely fresh and vibrant Sonoran inspired food, Guillermo's is also a beacon of ancestral torchlight in this era of pan flash concepts. It is tradition, it is consistency. Sometimes it's nice to take a break from the hottest trend in modernist cuisine and just get back to a place that is comfortable and familiar, one that is also home to a hand-signed De Grazia painting, a gift to the owner when the legendary Tucson painter was a regular patron. Not presidential timber, but still a legacy.