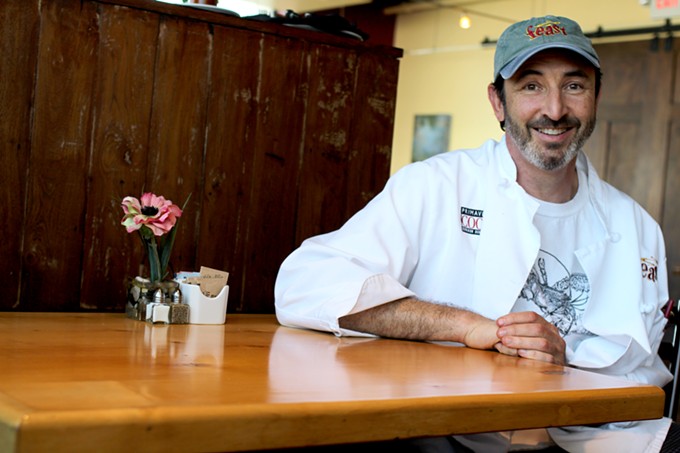 Doug Levy has seen waves of trends wash over Tucson's dining scene. He's seen good restaurants shutter, and he's cooked at a few of them. While his restaurant Feast (3719 E. Speedway Blvd.) may not be the flashiest in town, indeed some may say the décor is a bit dated, Levy's focus is, and seemingly always has been, providing forward-thinking, upscale food paired with world-class wine and cocktails.

It's certainly not common for a chef-owner to have a hand in both the wine list and cocktail offerings for more than an opinion, but Levy's voracious desire to read menus and learn about anything with flavor has made him a knowledgeable contributor outside of the kitchen as well. Still, ever humble, the mention of him leading Tucson's Old World wine scene is quickly brushed off, though some bartenders in town point to him as such.

"That's a generous assessment," he says. "I guess you could say I bring my own appreciation of Old World wine to what I'm doing."

With the restaurant's adjoined bottle shop, Levy is able to offer a stunning variety of wines to diners—the restaurant's list features 20 to 30 bottles on its own. He helps write the list with the assistance of wine director Megan Nelson and sommelier Kevin Anderson. The restaurant was recognized by Wine Spectator in 2015 as a "Best of Award of Excellence"—the second highest restaurant ranking and a fact he didn't even mention.

Similarly, he runs Feast's cocktail program as a collaborative effort. And, just as with his wine knowledge, Levy remains characteristically deferential to his contributions.

"I think what I do is having no preconceived notion about what a cocktail should be," he says. "I approach it all from my gut—from a chef's perspective."

Sure, he knows intricate historical points surrounding specific cocktails, but he claims his "cocktail knowledge is all smoke and mirrors."

"My idea of a good time is reading other people's menus, cocktails and wine lists," Levy says.

That chef's perspective tends to include more culinary ingredients, which makes his additions to the menu, admittedly, not always the most simple to execute for bartending staff on busier nights.

"My drinks do tend to be a little more labor intensive," Levy says.

Despite that thirst for knowledge and passion to create, Levy's path as a restaurateur hasn't been an easy one. He knows better than any that Tucson is a hard market—especially when you're trying to execute fine dining.

After working a decade in kitchens and a brief stint at a "tragic consulting gig," Feast began about 16 years ago as a "gourmet carryout" restaurant in the current Zayna Mediterranean space just a few blocks west of Feast's current location on Speedway Boulevard. His goal was, ideally, to keep cooking, but in a format that would allow him to work a saner amount of hours. However, he found more and more that his customers wanted to dine-in.

"I thought I was going to have a life," Levy says. "I ended up with yet another restaurant."

That's not to say Levy doesn't love what he does, but the long, demanding work in a kitchen can get to anyone after a number of years.

"I found out the reason we were selling so much take-out was because there was no room for them," he says. "People wanted to eat there."

After several years, Levy says the opportunity arose to purchase his current restaurant space, which he lovingly deems a "monstrosity" based on its size, and Feast became a full-service, upscale restaurant.

However, 2010 was far from an ideal time to open up any business in Tucson, let alone a restaurant with higher-than-average price points, and Levy found it was really difficult to pull younger people in—they just simply could not afford it.

"The average guest at that time was between 60 and 75 years old," he says. "There's so much more younger people now. It's so encouraging."

He's not an ageist, by any means, but he does look to younger people, both diners and chefs, to carry the torch for the future of Tucson's culinary legacy—one he hopes will continue to include both affordable and more expensive options. However, trying to cater to the ever-changing whims of modern diners isn't always easy, thanks in no small part to hype lists and trend pieces constantly changing what's perceived as important in the food world.

"We're not for everyone. We can make some goofy, dumb stuff," Levy says, laughing. "I wouldn't call us fine dining. I mean, I don't even button my coat. We're higher-end casual."

Still, being on the higher end and being less trend-centric, though his menu does change monthly, means a fair amount of uncertainty for Levy.

"Everything is cyclical. Fine dining will come back," he says, "And then it will go away again. It's all about if the market will support it. Tucson is a casual town." He then points to the standard attire—shorts and a t-shirt, the rare need to ever make a reservation and the fact that most people just don't want to spend four hours in a restaurant here on a coursed out menu. It's no one's fault, and he seems to be fond of it as much as it is a little disquieting for him. "We're not a white tablecloth town."

On the horizon, he sees bumps in the road for the Old Pueblo dining scene, but also hope.

"The people opening restaurants now are young. They didn't come up in hierarchical French cooking."

Though that means, in general, more inclusiveness and possibly creativity, he says the real issue doesn't lie in if Tucson will have fine dining in the future at all.

"In Tucson, the people that have been opening restaurants have come up in Fox Restaurants, and they tend to be more concept-driven," he says. "It's very much about the business part of running a restaurant."

Now, he's not trying to start a harp-on-Sam-Fox-fest, pointing to the well-known restaurateur's ability to "create a space," but he is concerned that if business is at the forefront, food might take a backseat—that progressive cuisine will disappear in favor of "appealing to the broadest spectrum of people."

"It's not bad at all. It's just not something that I haven't had before," he says. "It's not like I don't get it, though. Restaurants are a risky venture."

Often times, he notes, to build out a visually appealing restaurant, people have to rely on investors to fund the process. Investors, in turn, seek to play it safe with their money, and that's just how it goes.

He himself lived on "savings and borrowed money" for three years while Feast started up. He says it was oddly freeing to live on next to nothing, since it was his own next to nothing.

"There's a danger in opening a place that has to have all of the bells and whistles," he says. "The more you owe, the deeper you're in. It's scary."

It's with that reality that he has grown to respect chefs like Maria Mazon of Boca Tacos, who he says would absolutely nail fine dining, but instead she started small and manageable.

"We're on the cusp of the next wave of people. I don't know who they are yet, but there's going to be some closures and then this young talent will basically have turn-key restaurant spaces," Levy predicts.

"I'm excited to see people creating food," he says. "There are people who've come up in the kitchens of Albert [Hall] and Janos [Wilder] and Jonathan [Landeen] who have learned enough tricks of the trade to start their own restaurants and have their own ideas about what makes them excited. We'll see those influences from the old guard, but we'll also see independence.".