I first met Carlos Robles Elías when I traveled to his ranch in northern Sonora a few years ago with a group of Arizona conservationists to seek evidence of large, spotted, feline carnivores.

Somehow, some way, a few rare jaguars and ocelots seemed to be finding their way into the United States from source populations in northern Mexico, reclaiming wild lands they'd occupied for thousands of years until they were nearly exterminated by Mexican ranchers, westward-migrating gringos and government predator control.

Carlos' 10,000-acre spread, Rancho El Aribabi, lies just 30 miles south of the U.S. border. To biologist Sergio Avila, the area was an intriguing target for investigation. He was launching a program called "Cuatro Gatos" for the Sky Island Alliance, a regional conservation nonprofit. The goal was to identify and conserve habitat and movement corridors of jaguar, ocelot, puma and bobcat, none of which pay much attention to international borders, if they can help it.

When Sergio approached Carlos to ask him if he could study his ranch, he was amazed to discover a very rare species: a Sonoran rancher who was already working to implement a visionary conservation ethic on his land. At great risk and personal expense, Carlos had pulled cattle off of large areas of his ranch, constructed water infrastructure for deer and other wildlife, and designed cattle guards that would not be death traps for small animals.

I'd done volunteer work for the Sky Island Alliance for years, helping study and restore the landscape in special places all over Southern Arizona. When my big, half-wild orange tabby, named Puma, died, I made a donation in his name for one of the many remote sensing cameras the group uses to collect photographic evidence of animals in the wild, and I volunteered as often as possible to help deploy and maintain them.

It wasn't long before the cameras began to show Carlos that his vision was clear. The images showed not just ocelot and other cats; many other species appeared regularly in furtive snapshots and fleeting video of a hidden world—fox, skunk, coati, ringtail, raccoon—and even opossum and badger, which Carlos had never seen. But the biggest prize remained as mysterious as Mayan legends. Sergio found massive paw prints that could only have been made by a jaguar, but it would be two years before the cameras corroborated that evidence.

I'll never forget the feeling of finding jaguar tracks just a few feet in front of a camera and giddily anticipating a point-blank photo—only to discover that the equipment had malfunctioned, and the memory card was blank. Or the exhilaration of seeing the date and time stamp on an ocelot photo and realizing that the beautiful, secretive cat had passed by just a few hours earlier. Many times, Sergio has recounted the strange feeling he had while hiking alone to check cameras on the day that the first long-awaited jaguar photo appeared—a preternatural sense that the big cat was there, that the time had finally come.

The long, hard work of Carlos, Sergio and many other researchers and volunteers will be rewarded later this month when Rancho El Aribabi receives a formal, legal designation from the Mexican government as a voluntary land-conservation preserve.

A couple of weeks ago, I joined a group of volunteers for a wildlife-tracking workshop at the ranch. Some of us had been told that Sonora was nothing but a drug-infested war zone, and that we were crazy to go there. When Carlos hears of such talk, you can see the pain in his eyes, which see the other Sonora—full of resourceful, hardworking people and natural beauty. El Aribabi was handed down through his family for generations, and he can't help but hold it in his heart as a precious place. He put the conservation agreement in his children's names to carry his dream forward for generations to come.

After a long day of tracking, we gathered to hoist a few rounds of tequila to celebrate the news. Carlos proudly told us that his brother, who owns the adjacent ranch and had been skeptical of his conservation scheme, had heard the news and quickly approached him with curiosity and renewed respect.

In the workshop, we learned that an animal does not always leave a track, and not all tracks are discernible to the untrained eye, depending on the conditions of the moment, the texture of the earth, the behavior of the creature and many other factors.

On Rancho El Aribabi, Carlos Robles Elías has left a large and distinct set of tracks that lead away from fear, and toward hope. To all those who would follow, I say salud.

Tucson at Its Best

By Chelo Grubb, Randy Serraglio, Mari Herreras and A. Greene 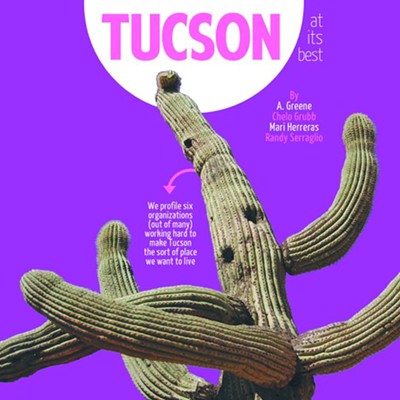