While it's not fair to assume that every remake only takes shape for the money, some are more obvious cash grabs than others.

Consider the fact that the makers of Footloose have commissioned cover versions of the songs from one of the best-selling soundtracks of all-time. But they only wanted remakes of the big hits, mind you, choosing to fill the also-ran slots with, well, newer also-rans.

So, yes, it is probably safe to assume that revisiting this film has more to do with a payday than the timeliness of a small town that institutes a ban on dancing—and, by extension, a ban on good-natured fun for hormonal teenagers.

That setup has always seemed ridiculous, but legend has it that the original film took its inspiration from high school students in Elmore City, Okla., who in 1980 fought to overturn a century-old ban on dancing within the city limits, just in time for prom. Still, the concept creaks from being so outdated 30 years later.

The update is largely unchanged where the key points are concerned, and when the remake does stamp the 21st century on things, it misfires. Take, for example, the moment when our hero, Ren McCormack (Kenny Wormald), throws on his iPod instead of a Walkman. Naturally, the first thing he wants to hear is "Bang Your Head" by Quiet Riot. Sure.

Irrelevance notwithstanding, Footloose is crafted to recapture the appeal of the original fairly well. It's energetic, has some nice comic relief, presents a very reliable boy-meets-girl formula, drops in those familiar and catchy songs, and showcases attractive leads—but there's not a drop of magic anywhere within this thing.

Some of that stems from the rather unusual circumstances the remake had to endure. A low-budget movie coming from the same studio that saw so much success with the initial film, Footloose encountered a bumpy road. First, Zac Efron was in line to play Ren, but he walked away after deciding that he wanted to distance himself from his High School Musical past. Several months later, Chace Crawford from Gossip Girl got the role, but then backed out, citing scheduling issues. The film also switched directors, with noted choreographer and High School Musical director Kenny Ortega bolting in 2009. He was replaced by Craig Brewer, who, with Hustle and Flow and Black Snake Moan on his résumé, certainly would not be a first-round choice for something like this.

Because of all those headaches, Footloose is not the film anyone envisioned three years ago. It would have been a great vehicle for the talented Efron, but who in the hell is Kenny Wormald? He's a dancer, primarily, and that could have served him well if Kenny Ortega was still directing this, but instead, it's the more-serious Brewer, who would choose to focus on Wormald's acting. What a pity.

This ridiculous story—The Town That Banned Dancing—is made even less sustainable by how seriously it is taken. Strangely, Brewer does not let the dancing skills of Wormald and his leading lady, Dancing With the Stars alum Julianne Hough, figure too prominently in the proceedings. There is a lot of talk about dancing, and a bit of training and rehearsal—but with two inexperienced actors who just so happen to be trained dancers, why on Earth does Footloose rely at all on their dramatic chops?

Because Wormald is so uninteresting, and Hough is only drawn to look pretty and one-dimensional, the key supporting performances need to hold this together for long stretches. Dennis Quaid plays Hough's father, the preacher who pushed the town council to invoke the dancing ban three years earlier, and he's quietly effective. That says something, because Quaid has never been known as the quiet type. Miles Teller gets the most laughs as Ren's best friend, and Ray McKinnon, whose face is more recognizable than his name, probably delivers the best work overall as Ren's uncle. They don't save the movie, but it is elevated to a level of tolerability because of them.

The dancing that is featured doesn't seem to fit the rest of the movie, and perhaps that's a sign of Brewer's discomfort with that part of the material. The scenes are short and usually interrupted; they feel obligatory, and Brewer doesn't distinguish them in any memorable way. Not that the original was packed with dancing, but at least it was more organic and gave audiences a compelling reason for watching. No such luck here.

Certainly, there are worse remakes, and the aforementioned circumstances led to this being a Frankenstein version of the Footloose everyone thought they were making. It could be a lot worse, and at least the filmmakers recognized that Wormald and Hough needed help if they weren't going to dance for two straight hours.

In the end, none of that truly matters, because Footloose will make cash—which was probably the point all along.

Footloose and Footloose are not showing in any theaters in the area. 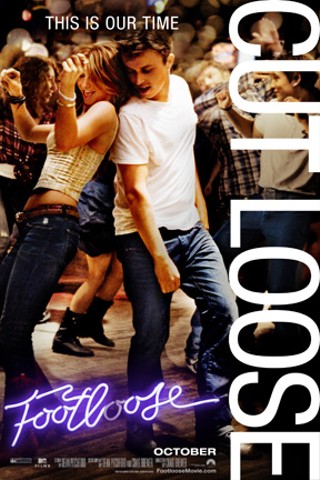