The Tucson Symphony Orchestra teams up with illustrators for their next concert. 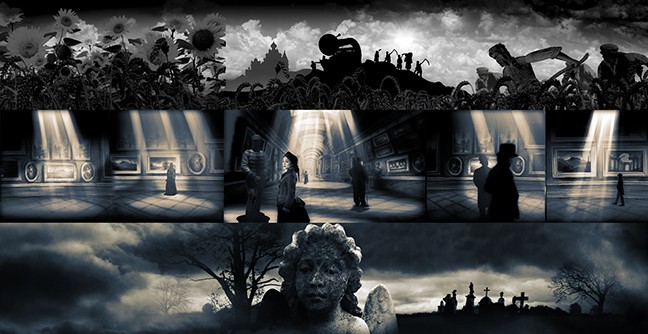 Courtesy Photo
A panoramic still from Pictures at an Exhibition.

Pictures at an Exhibition

Mussorgky's Pictures at an Exhibition coming to Tucson with breathtaking visual companion piece.

You might not have heard of Mike Patterson and Candace Reckinger, but chances are, you've seen their work. The husband and wife team—who work under the professional name Patterson + Reckinger—is behind the iconic music video for A-Ha's "Take on Me," and Paula Abdul's "Opposites Attract." (That's the one with MC Skat Kat, the animated cat. It won a Grammy.)

These days, they continue to animate to music and do work that combines different mediums. In 2011, they created a visual accompaniment for composer Modest Mussorgsky's Pictures from an Exhibition–A Remembrance of Viktor Hartmaan. The suite includes ten pieces—all based on paintings by Mussorgsky's friend Viktor Hartmaan.

Pictures at an Exhibition, complete with Patterson + Reckinger's animations, which are almost as diverse as they are stunning, will be playing at the Tucson Symphony Orchestra at 7:30 p.m. on Friday, March 16, and 2 p.m. on Sunday, March 18. The night will also feature Kabalevsky's Colas Breugnon Overture and a violin concerto by Khachaturian. Shows are at the Tucson Music Hall, 260 S. Church Ave., and tickets start at $15.

How long have you been doing art?

CR: I've done art since I was nine. Mike actually animated when he was a little kid. He's been animating since he was 7 or 8 years old. I was actually making puppets and drawings when I was a kid.

What can you say about the process behind creating Pictures at an Exhibition?

MP: We worked with a team of designers. Candace and I directed, but all of these people were essential in designing the piece. The animations are based on paintings by [Viktor Hartmaan,] a Russian painter who was friends with the composer. They were super tight friends, and the painter died young. They were both drinkers.

CR: Hartmaan died at only 39. I think it was a brain aneurysm. It was probably caused by the excessive drinking.

What kind of story do your visuals tell?

MP: It opens in a modern gallery that uses modern geometry and what look like real, present day people.

CR: It's supposed to be Mussorgsky's journey through the exhibitions of his friend's paintings. Each of the paintings immerses you into a world suggested by the music and by the theme of the original piece of artwork that that section of the music is about.

One of the pictures is called "The Old Castle," It' s a picture of an old castle in Italy. You go from the modern gallery into the old castle, and when you come out of the castle, then the gallery has gone back in time and now you're in the 19th century gallery.

And then you make your way through all these pictures, many of which are depicting aspects of Russian life. There are the peasants. There's a marketplace. Eventually, the promenade becomes somber, and you go down into the catacombs below Paris and contemplate death and [Mussorgsky] reflects on the death of his friend at such a young age.

There's a variety of artistic styles in the show. How did you approach the challenge of creating art based on music based on art in a way that honored Hartmaan's paintings but still allowed you to be creative and original?

MP: We try not to be overly literal or too direct with the storytelling, because when people go and hear music, they really like their imaginations to wander. They like to feel the music and not be told everything literally. So we're really careful.

What made you interested in creating a visual companion for this piece in particular?

MP: First of all, it's a great piece. We had worked in popular music, and we had worked on sort of the art end of things, so this is kind of a really amazing bridge between the two. It's so accessible, so we knew it's something everyone could kind of enjoy. We really loved creating visuals with music, so we thought it would be a great opportunity. It was almost like the perfect project.

CP: The arrangement is very "tuney." I got the feeling the popular appeal is very big. One scholar actually compared it to the Beatles. You find when you listen to it, you end up with the music stuck in your head.

MP: The other thing that's cool about the way it's being performed is that Ion Concert Media, who's projecting this, has a system developed by Scott Winter. Scott controls the speed of the video on an iPad to match exactly the conductor's tempo conducting the piece. So the conductor can do whatever they want, and the visuals will follow.

Is there a gap between the way you imagine your work will turn out at the beginning of a process and the finished process? Is it sometimes better than you imagined?

MP: I would say that we start out with a feeling, and kind of maybe some images that we like, and then it always evolves. Because when you start getting images in motion against music, it starts to take on a life of its own. So it's definitely an evolving process. It's a little bit like you start stirring the paint around on the painting and it starts to become something. It always sort of becomes something else.