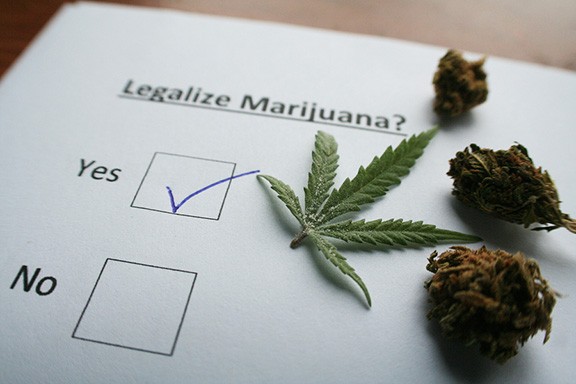 Bigstock
The push to legalize recreational use of marijuana via the ballot may get complicated, if a newly formed cannabis industry group has its way.

After a 2016 ballot initiative went down to defeat, supporters of the Smart and Safe Arizona Act have returned with a new plan for voters to consider on the 2020 effort.

But not everyone in the cannabis community is on board with that effort, which will require 237,645 valid signatures to get on the ballot.

"We're both in favor of adult recreational use, but we differ in the details of how to legalize marijuana in the state," said Mason Cave, a grower of the product as well as an industry consultant acting on behalf of the Arizona Cannabis Chamber of Commerce, made up of suppliers and independent dispensaries.

"We formed earlier this month to create a diverse network of individuals and businesses both inside and outside the state, including some pretty big companies in the marijuana space who would like to get into Arizona, to have a say in the industry," Cave says. "Toward that end, we're concerned about four issues relating to the Smart and Safe Arizona Act that we'd like to see addressed."

At the top of the chamber's list is the number of licenses (currently proposed at 156, with provisions for rural areas without dispensaries).

"That number of licenses, many of them already approved to sell medical marijuana, is too low and removes the opportunity for small businesses to join the green rush," Cave says. "We're not crying foul, we're just saying the door isn't being opened for new dispensary owners to come in.

Cave also believes the industry would be better overseen by the Board of Liquor Control, as opposed to the Department of Health Services, "because once we move into adult use, we'll need to have more of an enforcement focus versus the medical aspect."

The group views the proposed sales tax of 16 percent as too high. As a result, the tax could encourage a continuing black market in the marijuana trade, as has already happened in California. It's also pushing for testing to be done by an independent party, not by dispensaries themselves.

The chamber, albeit the new kid on the block, says it has the financial muscle and political juice to make their requests happen. He's confident the group can raise at least $6 million.

"A lot of interested groups, many from out of state, are coming in to support our effort," says Cave. "They don't like some of the political-type things that are included in the Safe Act initiative. So we're confident we can raise the cash we need."

Cave says he has been in communication with some representatives of the proposed initiative and "they seem to be receptive of our tax reduction concerns and the testing issue, but the other two—number of licenses and who oversees compliance—those issues seem to be major sticking points between the two sides."

Despite the differing details of how to accomplish the goal, all players in the industry appear optimistic.

"Doors are starting to open up and I've got to believe with all the CBD stores and hemp farms now operational, layered in on top of medical marijuana operations, I think we've got a billion-dollar industry in Arizona," Cave says.

While the Safe Act proponents are gathering signatures to place their initiative directly on the ballot next year, the chamber is working on a legislative referral process that would go straight from the legislature to the ballot, "giving voters two opportunities to decide on adult marijuana use," Cave says.

"Keeping previous voter rejection in mind, we think if we fix the four areas of concern, voter mood in the state will be more receptive than it was in 2016 and we'll have a winning measure," Cave says. "I think public support is there this time and we're trying to clean up the problem issues from last time so we'll have a measure that passes in 2020 and we can all light up." ■

For more information on the Arizona Cannabis Chamber of Commerce, log on to info@AZC3.org.