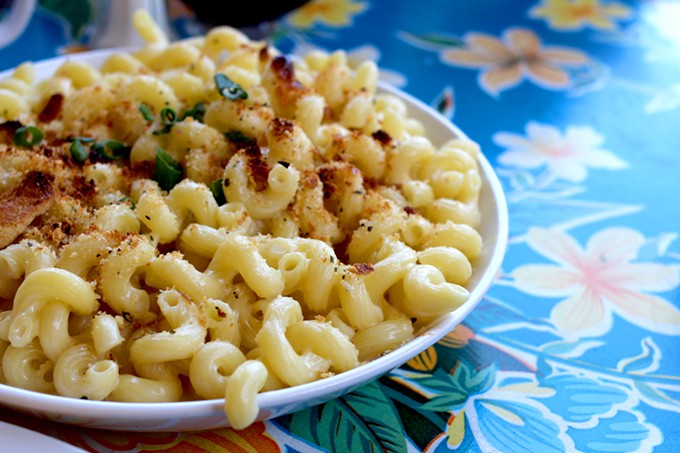 Heather Hoch
A seared ahi nicoise lets the fish be the main event.

It seems like no matter which direction you're headed in Tucson, you are met with a breathtaking view of one of the surrounding mountain ranges. To the west, the Tucson Mountains, Sentinel Peak and Tumamoc. To the south, the Santa Ritas. To the north, the Catalinas' massive Mt. Lemmon. To the east, Rincon Peak and Mica Mountain, which are also part of the sprawling Catalina range.

It's no surprise, then, that local eateries take advantage of this fact and boast their mountain views. After all, any sunset visit will yield dinner with a free show. However, none can brag quite like Saguaro Corners. Cozied right up next to Tanque Verde Peak—literally as close as you can get to the protected park area without being in the park itself, the commercially-zoned space certainly wouldn't fly if someone asked to build it nowadays, but the Saguaro Corners has been standing since the mid-'50s and has been grandfathered in thusly.

Recently, this historic restaurant space was taken over by a well-known name in the downtown scene. Kade Mislinski, formerly of HUB and Playground, quietly snatched the beautiful location up and slowly began instituting changes over the course of about a year (perhaps to ease the shock to regulars). Initially, not much had changed in the menu at all, with promises of "donut programs" and re-imagined comfort food staples going largely unseen for the first few months of the transition.

Now that Mislinski has left his mark on Saguaro Corners, you'll likely notice that some things have changed and some things haven't. When he took the space over, he didn't believe at the time that the concept was "broken," so it's no surprise that the simple, relaxed and homey ambiance of the restaurant has remained pretty much untouched. Still, it does show a measure of restraint on Mislinski's part, especially being associated with aesthetic-driven concepts like HUB and Playground, as well as his newest venture: a donut and whiskey concept called Batch right down the street from his former stomping grounds.

While he delivered on his promise of a "donut program" in the end, it's more important to note here that he also delivered on the promises that he made for the Saguaro Corners space. It's a neighborhood, family restaurant, inspired by diner eats and home cookin', that's a destination for those who don't live so far east.

However, the menu shows the ways he sought to improve the space, and no place is it more immediately evident than the beer and cocktail lists. With 24 rotating taps, featuring nearly half made in state, the bar offers plenty for craft beer lovers who happen to bike by on the afternoon suicide sprints around the mountains. The cocktail menu offers a handful of twists on classics like margaritas, whiskey sours and micheladas. At first glance, these drinks look rather syrupy on paper, but you'll be met with a cocktail that is sweet, sure, but balanced out with other flavors. I recommend the spiced hibiscus margarita ($8) here.

The theme of keeping it simple, but adding a bit of a twist to keep it interesting, continues through to the appetizer menu, where you'll find basic shrimp cocktails ($10), flavorful fusion-forward ahi poke tacos with ponzu ($13) and mini Sonoran dogs ($8), alongside dishes with names like "Wings of Awesomeness," "Poppitos" and "Monument de Nachos" that will almost assuredly make you either blush or cringe when ordered—unless you've already downed a pint or two.

On some visits, said ordering process was actually kind of fun, with attentive service and genuine conversation. On others, I would venture to (though I don't like to) use the words brash and hurried to assign to the service provided, with orders being taken and rung in wrong to top it off. You can roll the dice there or sit at the bar, though the views on the patio and in the dining room, which has large windows opening into a canyon area, are much better.

Eating through the restaurant's options, from a fresh seared ahi nicoise ($13) to more stick-to-the-ribs options like meatloaf ($13) or baby back ribs ($16), you'll find this menu has a lot going on. Tacos, burgers, mac and cheese, waffles, grilled cheese, pan seared salmon, herb roasted chicken—the list is almost dizzying. However, amidst all the choices, you'll find quite a few gems.

Herbed and well-seasoned lamb burgers ("The Greek") topped with tangy tzatziki ($19), fluffy on the inside and crisp on the outside waffles topped with fried chicken ($10) and more steal the show. While my chips were lukewarm at most, the fish side of the classic pairing ($13) offered a lightly beer-battered filet of tender, juicy cod that rivals the best in town. Similarly, the mac and cheese ($7 with the option for mix-ins like chorizo, E&R ham and smoked chicken) served up just about exactly what you'd want it to: the noodles had a little bite, the sauce was cheesy and creamy and smooth, and the crunchy bread crumbs on top added just enough texture to keep you diving in for bite after bite.

Less successful dishes like the Bubba Ann ($10)—which is kind of a mess of hard, dense biscuits, spicy gravy, eggs, a chicken tender, bacon and cheese, showcase the main area this otherwise standout little dining outpost on the edge of town could improve, and that's focus. The expansive menu could use some paring down to ensure every dish is as well executed as those waffles or that cod.

Maybe being so far from the downtown glitz has done Mislinski well, giving him a space to showcase his restaurant-running chops without being distracted by trends. In the end, it's clear that Mislinski and Saguaro Corners are doing well for each other.