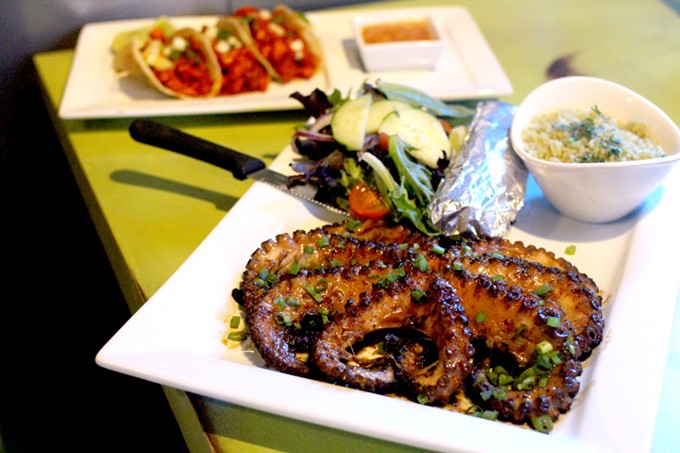 It's hard to miss El Berraco driving north or south on First Avenue. After all, the building that houses this homegrown, upscale seafood joint is modeled to look like a submarine. That means that while the sun is up, the building's stainless steel paneling glints in the sun, which, if nothing else, makes passersby intensely curious about what's inside.

Through the portal door with an ornamental hatch wheel, the inside of the restaurant is just as intriguing in design as its façade. Moody ambient lighting, tinted blue from the small, circular windows, contrasts with the red artificial light. The tables and benches are painted to look weathered--like they spent years getting character on the beach. If there's any question that El Berraco's menu seeks to take you to the ocean after getting an eyeful of the concept's décor, I'm not sure what to tell you.

Opened by BK Carne Asada and Hot Dogs' owner Benjamín Galaz with Hermosillo-based chef Claudia Lopez Burquez, the restaurant offers inventive interpretations and straightforward seafood that aims to be as fun as it is well executed. Nothing about El Berraco, including the name (which is a slang-term in Colombia that serves here as a boastful guarantee of the goodness to come), is not meant to be taken too seriously, rather, offering a casual dining experience with insanely fresh seafood and a full bar to complement.

One of the first things, aside from the unique appearance, you'll notice about El Berraco is the service. Arguably some of the best in town, the staff is fast, helpful, friendly, attentive and all those other things you look for. While the initial "welcome aboard" greeting might seem a little hokey, everything after that first "ahoy" is genuine and warm.

Starting with a drink, cocktails at El Berraco are, as the food, influenced from all over Latin America. Pisco, rum, aguardiente and tequila all have their place, showcasing liquor from North to South America. The cocktails themselves might not offer the most complex blend of ingredients, often riffing on classics, but sometimes you don't need much more than a sturdy pour of aguardiente, some fresh lime juice and agave nectar (as found in the El Colombiano--$9).

Now it is important to note here, that El Berraco toes and even steps over the typical Tucson price point with most entrées ranging in the mid-twenties and even a few in the 30-buck arena. If you're looking to stay under $20 per plate, several aguachiles, tacos, shrimp flautitas, fresh and grilled oysters and tostadas all have something to offer. The grilled oysters ($17), in particular, serve up six satisfying slurps on the half shell, covered in garlic parsley butter.

Los Latin Mussels ($22) deliver just what the name promises, using the usual channels of white wine, butter and parsley as the base for the broth, but adding a bit of heat and a salsa bandera base to mix in with bites.

The El Pastor taco trio ($11) takes the classic bright red, smoky chile marinade and applies it to shrimp, with a tangy, sweet pineapple salsa to pair. While the marinade on the shrimp was a little heavy, the combination of flavors was on point. Other taco offerings take usual suspects seaward, with El Chicharron as battered, deep-fried octopus and several other swordfish and shrimp offerings.

Speaking of octopus, you'll want to stop into El Berraco with a friend or two so you can split one of the standout house specialties: the simply named El Octopus ($30). On presentation alone, this entire grilled octopus dish is a looker, with beautifully charred tentacles presented alongside the house cilantro rice and a salad. The cook on the octopus itself offers tender meat in the middle and crispy bits on the edges, with a distinct grill flavor. Prepared with a very generous coating of lime juice, the acidity of the dish is aggressive, and perhaps could be dialed back a bit, but overall the simplicity of the seasoning lets the octopus be the star. This dish is a must-try for cephalopod lovers, though I'm guessing it'd win over tentacle-shy diners as well.

The restaurant's namesake dish, El Berraco ($23), is a simple mix of fish, peppers and olives, steamed in tin foil and opened tableside. While the buttery sauce at the bottom of the foil is certainly dippable, you'll want to incorporate any of the numerous house salsas (chile amarillo, apple, chipotle and salsa verde, among them) to spice up this comparatively low-intensity dish.

For tuna fans, the Tuna Tataki ($19) is a hearty serving of grilled fish over a bed of greens and topped with diced pineapple and cucumber. Somewhere between salad and entrée, the dish is filling, but not guilt-inducing. The tuna is fresh, served rare in the middle, though the sear on the outside could stand to be more pronounced to elevate the dish.

While the massive menu could take months to fully explore, El Berraco makes a great first impression. The ambience is light and the service is spectacular, making you want to stop in time and again. While the cheaper options might be the more traveled route at first, you'll want to dive into the mariscos-centric entrées on more special occasions, or just split the cost between some friends.

By and large, this one-of-a-kind local restaurant helps to prove Tucson can have great seafood, but, maybe more importantly, it shows that, when allowed to express their creativity, the city's restaurateurs can come up with something imaginative and laid back, but still very much a contender with good eats.