Opens Saturday, Dec. 25, at Century El Con 20 (202-3343), Century Park Place 16 (620-0750), Century Park Place 20 (747-7200) and Foothills (Loews Cineplex) 742-6174).
The Life Aquatic with Steve Zissou
Wes Anderson
Bill Murray
Owen Wilson
Cate Blanchett
Anjelica Huston
Wes Anderson has long been considered one of the reigning geniuses of American land-based filmmaking, so it was a bit of a shock when he left his natural, airy realm for the undersea world. Very few filmmakers have successfully made the "plunge" into aquatic cinema, and even a talent as large as Anderson's (Rushmore, Royal Tenenbaums) could be swallowed up by this vast abyss; just look at what happened to Kevin Costner (Waterworld), Irwin Allen (Beyond the Poseidon Adventure) and John Kerry.

However, in spite of the failures of his predecessors, Anderson has not only succeeded; he's made one of the best movies of the year. Sure, it was a crappy year for movies and pretty much everything else, but still, The Life Aquatic With Steve Zissou will be remembered long after we've forgotten about George Bush's Super Bowl "Nipple Slip" and Lyndie England's upset election victory in the Ukraine.

What makes Aquatic so great is exactly what makes Aquaman comic books so great: the realism. Which is to say the complete lack of it. I've always found it odd that the people who complain most about realism are comic-book and science-fiction fans. They're the ones who should be celebrating the fact that, oh, I don't know, somebody made a film wherein a man can fly.

Of course, being uptight about realism is just a sign of one's discomfort with the medium he loves, an attempt to justify the weirdness of vision that dominates in those art forms that favor flying laser turtles and mutant Democrat space hogs.

Showing no such discomfort with imagination, Life Aquatic dispenses with realism in order to present a touching story without the nasty constraints of believability. In short, Aquatic is the tale of one Steve Zissou, a Jacques Cousteau-manqué whose undersea documentaries are no longer beloved by his once-legion of fans. Setting out on his latest, underfinanced adventure, wherein he attempts to get revenge on the rare shark that killed his best friend, Zissou (Bill Murray) finds himself in the company of Ned Plimpton (Owen Wilson), a son he never knew he had.

The plot then centers around the egocentric, oversexed Zissou's attempts to dominate his son and engage in extramarital relations with the cute, pregnant reporter (Cate Blanchett) who's hitched a ride on his boat. The plot, in short, is nothing special. What is special is the way Anderson presents the details of his film.

For example, Zissou's boat, "The Belafonte" (Get it? Belafonte sang that kind of music that was popular in the Caribbean, and the name of which formed the basis for that song by John Denver ...) is a cutaway set, and the camera pulls back frequently to reveal this. Essentially, Anderson made a boat and split it down the middle lengthwise so he could follow his characters from room to room and deck to deck.

Similarly, gun battles occur without casualties; battery-powered glowing jellyfish dot the beaches; and computer-generated, rainbow-colored lizards climb about the mizzenmast and foredeck. What Anderson is after, I think, is the movieness of the movie. If he's going to make a film about a father and a son, he needs to avoid the excesses of sentiment that can glop up even the finest Disney production. The refusal of realism provides just enough of a distancing technique that the relationships actually seem touching, instead of contrived.

Which is weird, because Anderson gets that effect by making every element of the film especially contrived. I think this may be off-putting to certain aspects of the American populace, i.e., those who like fake sincerity more than sincere fakery. Here's a test: If you like Oprah and Dr. Phil and Colin Powell's WMD speech at the United Nations, then I'd give Life Aquatic a miss. If you like Nabokov and Jean Cocteau and Mad Magazine, then I think you'll enjoy Life Aquatic.

Still, even if Anderson's trickery is not to your taste, you might just get off on the fine performances. Owen Wilson is suitably bizarre, playing Zissou's estranged son with a degree of surrealism that matches the film's sets and story. Bill Murray is, as usual, fantastic, and he switches easily from broad over-acting during the action sequences to resigned sluggishness in emotional moments.

There's also a nice turn by Willem Dafoe, who's one of those straight men who should always have been doing comedy. Plus, for Harold and Maude fans, Bud Cort makes a charming appearance as an insurance company agent who must tag along on the Belafonte in order to keep things on budget, and in order to get kidnapped by Filipino pirates.

With acting that's uniformly spot-on (Angelica Huston is probably cruising for an Oscar with her Morticia-esque performance as Zissou's wife), a script that sharp enough to cut glass and a visual sensibility that's one part Peter Max and two parts Salvador Dali, it's hard to imagine that Life Aquatic won't be considered one of the best films of 2004. Then again, 2004 was a year when a lot of things I couldn't have imagined occurred, so what do I know? Nonetheless, if you're not too busy organizing resistance to gay marriage or recovering from dioxin poisoning or writing a bill that helps the drug companies and then taking a job lobbying for those drug companies, please head off to the cinema and check out what I think could be a watershed event in American filmmaking, a movie that eschews the simplicity of reality for the complexity of an aesthetic imagination.

The Life Aquatic With Steve Zissou is not showing in any theaters in the area.

Three Great Things to Do in Tucson Today, Wednesday, Sept. 19

Into the Mild: Sorry, Prostitutes Can´t Stay in the Dormitory

Into the Mild: Three Exorcisms is Where I Draw the Line 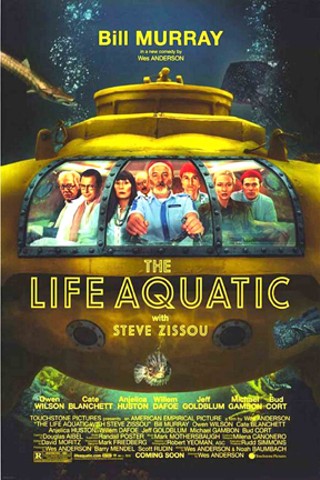