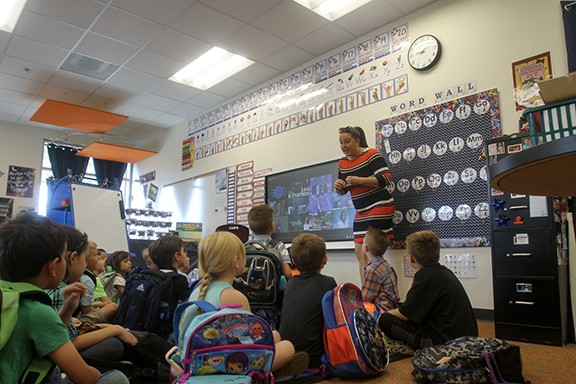 Courtesy photo
Amphi Public Schools is asking voters to continue to support schools.
Although the state government started putting dollars back into public education, school districts like Amphitheater Public Schools continue to turn to nearby homeowners to fill the funding gap so local kids can receive a quality education.

Districts get the majority of their funding from the state, but every year since the Great Recession hit in 2008 that amount of funding has shrunk. In the last decade, over $120 million was cut from Amphi schools alone.

To address the major loss of funds, Amphi (which spans from the Pinal County line down to Grant Road) has utilized a budget override, which allows them to collect 10 percent of what the state provided that year, directly from local homeowners through a secondary property tax. The money goes toward maintenance and operation expenses.

The override requires approval from homeowners every five years during a general election. It has been passed three times since 2005.

After Gov. Doug Ducey's 20 by 2020 increases, Amphi will receive an average of $6,021 per student from the state for solely maintenance and operation costs, according to district superintendent Todd Jaeger.

The current override, if renewed through Proposition 475, would provide an additional 10 percent on top of that. The total amount is about $7.9 million, but when the override began 14 years ago, the revenue was closer to $9 million.

"As the state budget cuts have taken place, the overrides have gotten smaller as well, because they're just 10 percent of what the state provides," Jaeger said.

If voters approve this year's 10 percent override measure they will see no increase in their taxes, because it is a continuation of an already existent override.

However, this year the district created another ballot measure: Proposition 476. It intends to create an additional budget override of 3.5 percent, specifically for special programs for kindergarten through third grade.

That extra money—which averages out to $43 per household annually—will provide free full-day kindergarten and shrink class sizes in those grades by five to eight fewer students, according to Jaeger.

"The state used to provide full-day kindergarten and then cut that funding," he said. "We want to restore that, other districts have restored it with overrides as well."

Beth Lake, a member of the budget override's political action committee called LEAP Ahead for Amphi, said Arizona is one of only a few states that do not provide free full-day kindergarten, forcing parents to pay nearly $1,300 a month to enroll one child.

"For a lot of families, that's a struggle," she said. "That's a mortgage payment, or a rent payment. To be able to give them free full-day kindergarten is huge because you're giving them that head start that they need. The better that foundation is in K-3, the better lifelong learner they're going to be."

Lake points out that federal Title I funding provided to the district is currently being used to pay for free kindergarten. The 3.5 percent override would allow the district to free up those Title I funds to be used for special programs provided to low-income students and their families.

She joined LEAP Ahead when they first formed in 2004 to prepare for the first budget override election. This was before the state cuts to education began. The override was originally intended to improve upon what Amphi already had to offer.

"We wanted the smaller class sizes, we wanted more art, music and PE, we wanted to give more electives at the higher level so that kids would be more career and college-ready," Lake said. "Then, the budget cuts hit. At that point, this became a necessity. When you lose $119 million over 12 years, this (budget override) has really kept our classroom sizes to the lowest possible we could manage, because that's just such a large chunk of money."

Because of 12 years of funding cuts, Lake said class sizes in the younger grade levels have gotten larger.

"To be able to reduce those class sizes, teachers can do so much more," she said. "They can recognize those kids that are struggling and they can give them more individualized attention and some intervention."

If the voters do not renew the 10 percent override, then next year the local tax phases down by one-third, followed by an additional one-third the next year, until it is eliminated.

Jaeger said past years' override approvals are the bellwether for continuing it into future years. The 2009 override received a 50/49 percent approval, and the one in 2014 received a 60/40 approval.

"As far as overrides go in general statewide, we've actually seen fairly good support compared to other places," he said. "The last election we had we actually won by the highest margin of any district in the state at the time."

There are 36 other public school districts in Arizona that will put override measures on their local ballots this year, according to a count by the nonpartisan education advocacy organization Expect More Arizona. In Pima County, Amphitheater is joined by Altar Valley, Flowing Wells and Sunnyside school districts.

"We're seeing the state funding start to come back, but we still have such a huge deficit in Arizona," Lake said. "Just because we live in a state that has financial issues, doesn't mean that kids don't deserve a quality education." ■