Red for Ed still on, despite Ducey’s promise of raises 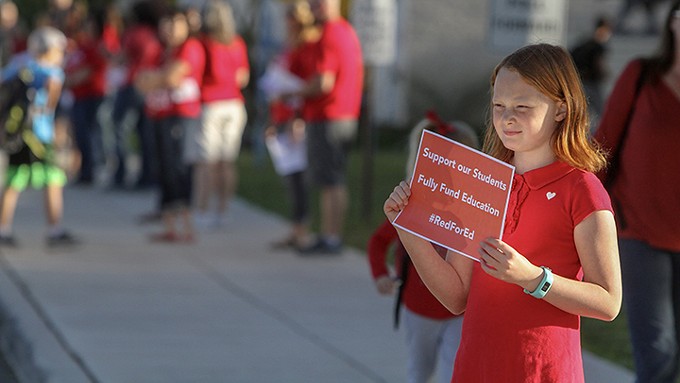 Logan Burtch-Buus
Across the state, teachers and proponents of additional education-funding participate in Wednesday morning walk-ins, possibly building momentum for a walk-out.

Teachers waved "Red for Ed" as passing cars honked their support before school on Wednesday, April 11. Forming a wall of red shirts, roughly 40 Amphitheater High School educators took part in a walk-in to demand better wages and school funding from the state legislature.

Every Wednesday morning, educators across the state have been holding morning rallies, or "walk-ins," outside their schools. The Red for Ed movement, which began in early March, is calling for a raise for educators and additional funding for schools.

Facing mounting pressure, Gov. Doug Ducey announced on Thursday, April 12, that he would give teachers a 19 percent raise over the next three years, but Arizona Educators United (AEU), the grassroots coalition of educators that launched Red for Ed, isn't settling for a vague promise that addresses just one of their demands.

Jason Freed, president of the Tucson Education Association, said Ducey's promise is a "step in the right direction but still far from the finish line." Educators want more details about the proposed raises. They're asking for a 20 percent raise for teachers and competitive pay raises for all education support staff, such as librarians, bus drivers, counselors and teachers' aids.

"None of us are OK with excluding other educators," Freed said. "The governor hasn't lived up to the expectations that people have."

The AEU's demands also include an additional $1.1 billion for education funding—to restore it to 2008 spending levels—and no new tax cuts until per-pupil funding reaches the national average.

Why Red for Ed

Amphitheater High English teacher Lisa Millerd stood in front of the school with a sign reading "We support #RedforEd" on April 11. She was wearing red, including her earrings: dangly Wonder Woman and Supergirl actions figures.

"Teacher pay is way too low," she said. "But it's really hard to move our Legislature, 'cause they just don't get it."

More than 2,000 teaching positions in the state are vacant and another 3,400 classrooms are taught by people who don't qualify to teach under state standards, according to a report by the Arizona School Personnel Administrators Association.

A teacher for 24 years, Ousley took a substantial pay cut when she moved to Arizona from Ohio in 2007 and says she often holds a second job. She's been a coach, a tutor and has worked in retail shops while teaching fulltime.

"I'd like to be able to afford to buy a house and not keep renting," she said.

Arizona ranks 49th in the nation for high-school teacher salaries and 50th for elementary school teachers, according to an analysis by Arizona State University's Morrison Institute for Public Policy.

Underfunding in the state's school system has led to overcrowding in classrooms, outdated textbooks and supplies, and an exodus of qualified teachers who move out of state for higher wages.

On April 11, about 22,000 people, in 1,100 schools, in 130 school districts participated in walk-ins statewide, according to Red for Ed organizers.

"Walking in is good practice for walking out," said Marea Jenness, a science teacher at Tucson High Magnet School.

Derek Harris, a lead organizer with AEU and a band teacher at Deitz K-8 School said the possibility of a strike is still on the table, despite Ducey's apparent change of heart. (Just days before, he was sticking by his proposal that included 1 percent raises and called the Red for Ed movement "political theater.")

Harris said that Ducey "has created more confusion than certainty. We haven't seen enough change in the government to change our minds on anything."

The AEU says teachers statewide will vote, by Friday, April 20, on whether to walk out.

A look from the inside

Jenness, the Tucson High science teacher, said she's one of the highest-paid teachers at Tucson High because of her experience. When she was hired, in 2004, her salary was just over $43,700, including teaching summer school. Her 2018/19 contract is $48,400.

That's a 10.8 percent increase over 16 years. In the same amount of time, Social Security and cost-of-living stats have increased 31 percent, which means she's effectively making less than when she was hired.

The starting salary for certified teachers in Arizona can be less than $35,000. Jenness' husband worked as a special education teacher's aide. Her 16-year-old son, who worked at Sprouts, made only $1 an hour less.

A photo of one Tucson school's faculty bathroom was circulating on Facebook. It's looks like a rundown gas station bathroom. At another school, the swamp cooler wasn't working properly and teachers had to dump buckets full of water into it to get it to continue pumping cool air. Jenness said at Tucson High, textbooks are falling apart and computers don't work.

"We just have our priorities upside down in this state — recession's over, but we're still suffering the billions that were cut, and they're not giving it back to us," she said. "People don't need gold-plated toilets when our teachers just hope their gas will last 'till Friday."