Save a pet, save a vet: Nonprofit organization trains service dogs to help vets cope with PTSD 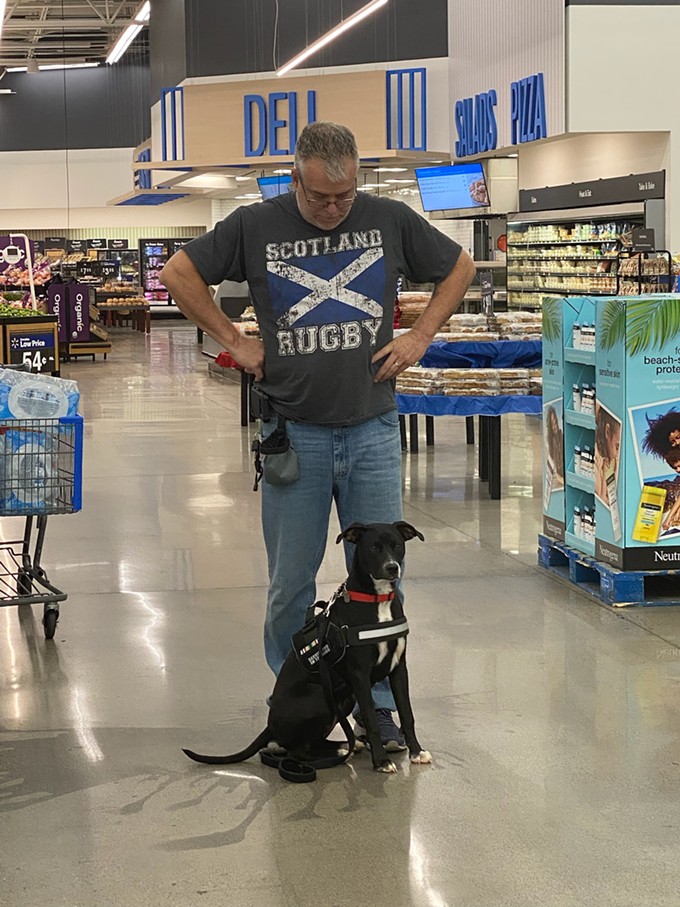 Many years ago, when Marine Corps veteran Dave Rafus returned from overseas, he was diagnosed with post-traumatic stress disorder.

At the time, he and his wife talked about getting a service dog, but there were no organizations in Southern Arizona that offered this training service. Instead, they went to Pima Animal Care Center and brought home Menifa, an American standard and American bulldog mix.

“We started with one dog and an idea,” Rafus said.

In November 2015, Rafus launched the nonprofit 1 Veteran Foundation with a dream of giving veterans coping with PTSD a service dog at little to no cost.

On average, a service dog costs anywhere between $20,000 to $30,000, which is why the organization relies so heavily on grants, donations and volunteers.

The more costly organizations may utilize breeding programs, but the process of PTSD service dog training does include but is not limited to boarding costs, medical expenses, training costs, and other unanticipated expenses.

“I’m of the philosophy that there are a lot of unwanted dogs out there,” Rafus said,” We use rescue dogs to not only help save a vet, we can save a pet.”

Adoptions have allowed 1 Veteran Foundation to significantly cut costs, matching pets to veterans for about $2,500-$3,000.

Over the past year, Rafus has taken a step back from day-to-day operations, handing over the reins to his friends Brian Latta and Calvin Saylors, as co-chairs of the foundation.

Latta met Rafus through the Combat Vets Motorcycle Association. It was a “no-brainer” for him to get involved with 1VF.

“It’s just a handful of people trying to do this, just scratching at the surface,” Latta said, “We all have loftier goals and would like to see this grow into a much bigger organization.”

Saylors is considered a “Cold War veteran” who served in the Air Force. He was and is still currently in a motorcycle riding club, STAR Touring and Riding, and met Rafus through 1VF during a meet and greet outside of the biker store, Renegade Classics.

“We happen to have a veteran in our group that has PTSD, so we wanted to be able to get him a service dog,” Saylors said.

Since then, the club has helped organize several motorcycle poker runs, raising approximately $12,000-$15,000 for 1VF.

“Dave just saw how much work I was putting into it and he just invited my wife and I to join the board of directors,” Saylors said.

Since then, Saylors has served as the operations manager, arranging veteran interviews, requests for dogs, paperwork, training schedules, testing and more.

Not every dog can be a service dog

It can take looking at anywhere between 50 to 150 dogs before finding the right one. At minimum, the dog must weigh at least 40 pounds and have a specific temperament.

“As much as everybody thinks their dog is going to be the greatest service dog, they may not have the stamina or the mentality for service work,” Rafus said.

If veterans already have dogs, the dogs still must undergo interviews to prove their qualifications for service.

It takes about 250-350 hours to train a PTSD service dog, not including the time to train the handler. The entire process can take anywhere from six to 18 months, depending on the availability and determination of the team.

It’s an arduous process. Testing begins from the minute the canine candidate exits the vehicle, Saylors said they check whether or not the handler has full control of their dog.

“We watch how they interact with people, automatic sliding doors,” Saylors said.

Malls and, at times, Walmarts can be the ultimate playing field, due to the ample amounts of people, smells and distractions.

Veterans with PTSD can have very specific triggers, which is why 1VF pays such strong attention to detail when testing these dogs.

“The veteran is using the dog for what they’re there for and recognizing when the dog senses they’re getting in trouble,” Saylors said.

At times veterans and even civilians, don’t realize that the dogs can sense distress before they can.

Dogs know us better than we know ourselves

1VF members refers to dogs as “teammates,” given their nature of watching their handler’s back, ensuring that their needs are met and that they’re safe.

Like Latta’s teammate, “Cool Hand Luke,” or Luke for short, other teammates are able to sense where their handlers’ emotions are going.

“They know you better than you know yourself,” Latta said, “They have a sixth sense.”

The trio attributes dogs’ capabilities of picking up smells and picking up their handler’s chemical changes.

“They’ve got this uncanny ability to read human behavior better than humans have the ability to judge human behavior,” Rafus said, “You might be able to put on a happy face, but you can’t change the chemical smell your body is putting off that the dog can pick up.”

Rafus has had his own experiences with Menfia being able to guide him out of a situation before a pseudoseizure attack which are triggered by high anxiety.

“She will detect them beforehand and if I tell her to leave me alone and she refuses to listen, I go and take my medicine,” Rafus said.

It took just one experience of ignoring her for him to listen every time. He subsequently went through a five-year stretch with no seizures.

Affected by the pandemic

The couple of years have been challenging because of the pandemic.

“Due to COVID, we’ve been deeply restricted in being able to go in and look at dogs and check their temperament or personality,” Rafus said.

Pre-COVID, 1VF would go to PACC, the Humane Society and Green Valley Animal League to look for dogs and see if any met their criteria, If so, they would call a veteran to meet the dog and establish a bond.

Then the world shut down, limiting human interactions.

“We could no longer do things the way we used to,” Saylors said in an email.

Visitors weren’t allowed to take dogs around for a walk when Rafus found Echo, Menifa’s replacement.

“I had to put my hand down underneath the kennel to see how she would react,” Rafus said.

At times veterans have approached the organization under the assumption that they would receive a free dog, without realizing that they would also have to undergo an interview.

Although veterans are very strong people by nature, Rafus said that communicating emotions is not their strong suit.

The interview can be difficult and emotional depending on what the veteran chooses to share, and can vary from a therapy session to an emotional dump.

“You have to be ready to listen without judgment and emotion,” Rafus said, “They’ll tell you everything from the time they were born to the emotional destruction that they faced when they were in the military.”

One of the primary questions prior to the interview asks for an official PTSD diagnosis from a medical professional.

“There are a lot of people [who] self-diagnose or their sister, brother, cousin or friend will say, ‘Dude you’re messed up,’” Rafus said.

“We also encourage them that if they’re not in counseling, that they go to counseling,” Saylors said.

The dogs are only one component of the treatment process, but even talking to your “teammate” can do wonders.

The fight to stop veteran suicide

On average, about 17 veterans will commit suicide every day, according to a National Veteran Suicide Prevention report released by the Department of Veteran’s Affairs in September 2021.

Exposure to intense combat trauma may influence suicide risk, but considerable debate exists among researchers surrounding the relationship between a PTSD diagnosis and suicide.

PTSD can reveal itself in a variety of ways, including as extreme combat-related guilt, intrusive thoughts such as reliving a specific traumatic event, hyperawareness and other symptoms disruptive to one’s daily routine.

A variety of evidence-based treatments are available, including service dogs.

Veterans who have partnered with service dogs have experienced less symptoms of anger, anxiety, sleeplessness and even improved cortisol levels according to research from a professor of human-animal interaction at Purdue University.

That’s why the 1 Veteran Foundation has invested in training veterans with teammates for life.

Looking towards the future

Right now, 1VF is looking for a corporate, state or federal sponsorship to achieve their goals.

The organization envisions a large property to build kennels and dorms to be able to train 10-12 dogs at a time while simultaneously having their veteran handlers on property. Once the dogs reach about 90% trained, they would ideally be assigned to a veteran to finish out their training together.

1VF not only pays for adoption fees from a shelter, they pay for an initial exam though Ina Road Animal Hospital, as well as any shots, micro chipping, spay or neutering.

They do their best to work with organizations that are willing to donate dogs, although shelters may also price gouge. Given PACC’s most recent declaration of critical overcapacity, it would be a mutually beneficial relationship if 1VF had their own location.

“This is why we would love to have that property, that on site kennel,” Saylors said.

Having their own space would allow room for more opportunities with training, and saving more veterans’ and pets’ lives.

Which is why 1 Veteran Foundation is in dire need for a few “corporate angels.”