There really was a classified ad soliciting a volunteer for a time-travel journey. It ran in a 1997 issue of Backwoods Home, a magazine espousing Libertarian principles and living off the grid. "You'll get paid after we get back," the ad explained, before adding cryptically, "Must bring your own weapons. Safety not guaranteed. I have only done this once before."

Seriously, how could that not be the basis for a movie? But in the comedy Safety Not Guaranteed, the stroke of genius from writer Derek Connolly was only reading into the ad exactly that much. There is a bit of Internet history surrounding the ad and the person who wrote it, but this is not that story. Instead, the absurdity of the offer becomes a filter for everything we see.

The film is dripping with laconic sensibilities to balance out such a bizarre pitch and spends most of its time developing quirky, likable characters who are all conceivably one or two moves away from acting on a classified ad just like that. And they're the kind of people who drop lines of dialogue like, "There's no sense in nonsense. Not when the heat gets hot."

Jeff (Jake M. Johnson) is an undisciplined magazine writer who takes the assignment of tracking down the mysterious time-traveler. Because the ad uses a P.O. box, casting a net around Kenneth (the suddenly ubiquitous Mark Duplass) doesn't take very long. Along for the ride are interns Darius (Aubrey Plaza) and Arnau (Karan Soni). And as is usually the case with interns, they wind up doing most of the work. Perhaps because she's a pretty girl, Darius has luck getting through to Kenneth and finding out why—but never really how—he plans to go all the way back ... to 1991.

The movie is less about becoming a time-traveler than it is about how to trap one in the wild, so Safety Not Guaranteed spins familiar but often very funny subplots around Kenneth and the trio from the magazine, biding our time for a fittingly odd payoff. Jeff reconnects with his high school sweetheart; Darius connects with Kenneth; Arnau connects with women for the very first time; and Kenneth remains largely disconnected from reality. He believes that the division of the government responsible for black helicopters is following his every move. Of course, he also thinks he can travel 20 years back in the past with a homemade time machine, so Kenneth might not be the most-reliable guy in the world.

If you're a big supporter of independent film, Safety Not Guaranteed is one of this year's standard-bearers in addition to being one of the better, more-entertaining movies of 2012 to this point. It not only tells a story in a way too peculiar for a mainstream movie, but it also avoids a pretty common indie pitfall these days of looping in a widely recognizable name for no particular reason.

And while Mark Duplass may have been filling his résumé nicely over the past couple of years, he is not the star this film ultimately creates. Aubrey Plaza does good supporting work on Parks and Recreation. You may have also seen her in other places without knowing who she is. But this film is an instant transition to bigger things for her. Whether it's because Darius is so well-written and sarcastic, or because she's finally hit her stride, Plaza is kind of entrancing here. Her instincts are impeccable, her comedy effortless, and her look just dangerous and sexy enough to make you reveal all your secrets about manipulating the space-time continuum.

Safety Not Guaranteed is not showing in any theaters in the area. 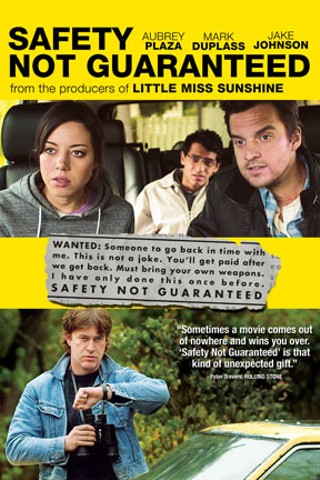