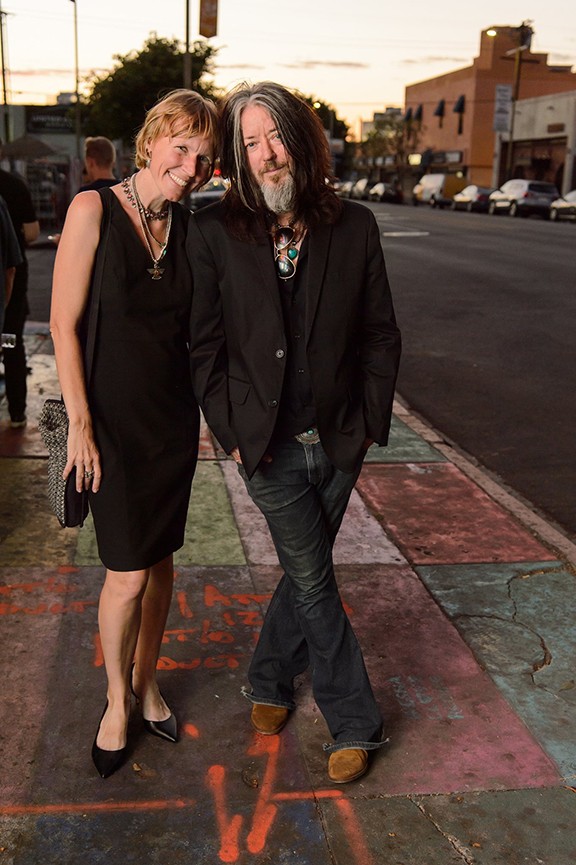 Courtesy photo
Co-creators Brian and Maggie Smith.
A collection of sordid, introspective stories from Arizona suburbs and elsewhere are coming to a streaming service near you! Twelve short films based on Tucson Weekly writer Brian Smith's book Spent Saints will land on Amazon Prime later this month.

Spent Saints, a semi-autobiographical collection of fiction short stories, details the life and trials of several characters, taking the reader from the rock 'n' roll clubs of Hollywood to the lethargic drug dens of Phoenix to the cold streets of Detroit. But in each of Spent Saint's 10 stories is a character struggling both internally and externally: alcoholism, poverty, depression, achievement, reconciliation and more.

Originally published in 2017 via Ridgeway Press, Spent Saints turned into a 12-part TV miniseries directed by 10 up-and-coming directors in three different states. Brian and his wife Maggie co-created the series, with Maggie serving as executive producer.

"I hand-matched directors with the stories they would be most adept at directing," said Maggie Smith, who also directed an award-winning documentary based on Brian Smith's Tucson Salvage column. "Brian and I co-wrote the screenplays for each episode, based on Brian's stories and I had a big hand in casting, art direction and production on many of the episodes."

While directed by several people, the series maintains a cohesive atmosphere. The episodes play as dark vignettes, often portraying characters feeling isolated in their conflicts, even if they're surrounded by others. These similar feelings range from the episode "Lost in the Supermarket" where an alcoholic wakes up out of place on a suburban lawn, to the episode "Spent Saints" where a budding rock star becomes disillusioned with the drug-fueled landscape of Hollywood.

Aside from the plots, the episodes even share a similar cinematography. Extreme closeups act in place of internal dialogues, blurred background makes the characters feel even more alienated, and the landscapes themselves hold almost as much character as the people on screen.

"Brian Smith's writing, as much as the way he reads his stories out loud, captures rhythm and cadence, and is certainly also visual, narrative, and emotional," said Sarah Ledbetter, who directed the episode "Sirens." "Maggie's passion for his stories and for bringing them to life, as well as her hard work realizing that vision, were the guiding forces behind my participation every bit as much as Brian's writing."

Although the episodes feature multiple main characters, the series, like the book, offers a consistent sense of progression. One character's struggles flow into another's, and when one finally does succeed, you feel relief and redemption for multiple. The series, intended for mature audiences, doesn't shy away from discussing topics like suicide and addiction. And this boldness is awarded with greater impact, both for the audience and the characters.

"So much of the story 'No Wheels' is internal, and putting it on screen you have to externalize it somehow," said Matthew Bradford, director of the episode "No Wheels." "I was very fortunate to inherit from the shorts that had been previously shot an excellent leading man in Ian Michaels, who's really great at conveying emotions subtly and non-verbally. But even with a great actor you can't tell a story in a visual medium in a completely internal way. Luckily, Brian provided the key to externalizing it, I think, in his location descriptions."

When Rani DeMuth, who directed the episodes "Lost in the Supermarket" and "Eye for a Sin," first read Spent Saints, the cast of characters grabbed her attention, and she thought of Hunter S. Thompson and Quentin Tarantino.

"This is the first time I've directed work that I didn't write," DeMuth said. "I was blessed to work with Maggie and Brian, who gave me creative freedom in the translation of their material. I was able to make the stories my own. They understood the budget limitations and allowed me to do some subtle re-writing when it served the same narrative purpose."

Brian Smith's stories, which often depict the peripheries of society, provided special difficulties for the directors translating the work into film. Aside from being made on low budgets, the filmmakers had to account for geographical and chronological differences in Spent Saints.

"Spent Saints takes place in the '90s, which made it a fun production design challenge, especially with a low budget," DeMuth said. "We lost our house location a few days before production on 'Lost in the Supermarket,' so my shot list went out the window. These kinds of setbacks aren't unusual on low-budget shoots. They teach you to go with the flow and to use your imagination."

This imagination turned into occasional guerrilla filmmaking for DeMuth. In one episode, the main character watches a U-Haul leave his driveway with all of his girlfriend's possessions. But the filmmakers couldn't afford to rent a large truck. Instead, they kept a lookout for U-Hauls around town during their shooting days, and managed to capture one just in time.

"I've spent some time in Tucson, but not encountered the world he describes, as I've been more of a tourist, and am sheltered by a lot of privilege," Ledbetter said. "I chose to relate more with the feelings and themes. Since our film was shot in the South, where we also struggle with addiction, poverty, generational oppression of women and people of color, and hopes and dreams that survive impossible odds and social oppression, that wasn't a stretch for me, nor for my co-filmmaker."

Although not all of the series takes place in Arizona, it still manages to hold a local flair due to performances by Tucson musicians like Billy Sedlmayr and Super J Lounge, as well as Brian Smith's own former band Beat Angels.

"The most difficult part for me and my co-director, Matteo Servente, was coming to terms with how the story and the script end," Ledbetter said. "There's always a bit of guesswork involved in getting past the words to what isn't said, and doing that with fidelity to the true intention of the piece."

Maggie and Brian Smith are currently touring the series with film screenings, book readings and live music performances in multiple states. But they're working their way back to Tucson, with a screening at the Museum of Contemporary Art Tucson on Saturday, Sept. 7. The MOCA show includes screenings of three Spent Saints episodes: "Lost in the Supermarket", "Delivery Man" and "Sirens," plus a book reading from Brian Smith and music by DJ Kid Congo Powers and Green on Red's Dan Stuart.

"So far it's been limited to local screenings. When the episodes go up on Amazon Prime, that will be our first chance to gauge any wide reaction," Bradford said. "I think the whole roadshow that Maggie and Brian have put on, combining episode screenings with readings and musical performances, is a fantastic, holistic experience."