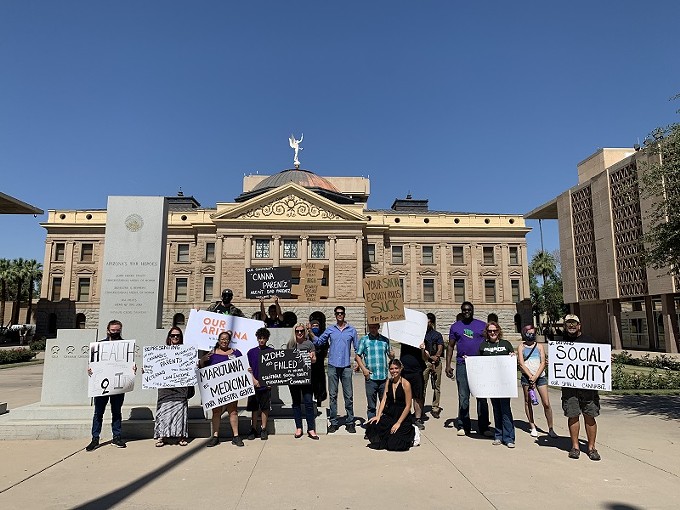 A group of cannabis advocates and representatives of Arizona NORML were in Phoenix on Thursday, May 27 to protest draft rules of the social equity program intended to help communities adversely affected by the war on drugs.

A handful of cannabis activists led by Julie Gunnigle, Arizona NORML's director for politics and civic engagement, showed up at the Capitol last week to protest proposed rules governing the distribution of 26 social equity licenses, one of the key selling points of Prop 207 that legalized marijuana in Arizona.

At issue is a perceived lack of public input for the process as the Arizona Department of Health Services crafted the rules the first time around, and a second draft released on May 19 has not resonated well with supporters of the program.

"It's a program that's designed to fail," Gunnigle said of the rules laid out by DHS. "In terms of bringing other folks in, one of the things that we've been so concerned about was the fact that there haven't been any live or in-person opportunities for feedback. There haven't been any Zoom calls and when we ask the department how these rules are going to be interpreted, it's all about what's on paper with no opportunity for feedback with the real stakeholders, which should be these communities that have been disproportionately impacted by the war on drugs."

According to Prop 207, the social equity program must promote the ownership and operation of marijuana testing facilities and marijuana establishments by individuals from communities disproportionately impacted by the enforcement of marijuana laws prior to legalization.

The initial rules released on May 6 allowed individuals to qualify for the social equity program if their 2019 household income was at or below 200% of the federal poverty level or if they were eligible to have their records expunged, another popular piece to Prop 207.

The revised draft reworked the definition of "communities disproportionately impacted" by the war on drugs to take geographic areas into account and allow individuals who were arrested in other states, or whose family members have been arrested for marijuana offenses, to qualify. Additionally, the revised draft requires applicants to develop, document and implement policies for giving back to disproportionately impacted communities, according to a press release from NORML dated May 21.

The proposed rules also allow licensees to immediately sell their business, which would give non-qualified businesses the opportunity to recruit qualified licensees that would be able to cash out with a license that, on paper, is worth about as much as $10 million in a multi-billion-dollar industry, according to Gunnigle.

"We're already hearing about folks [preparing to apply] for social equity license, who have zero desire to use them to operate a dispensary, or a manufacturing or cultivation plant," she said. "The rules allow for free transfer to non-social equity applicants, and NORML has voiced some concerns with this."

While some in the industry argue that a business owner should be able to do whatever she/he wants with their license, NORML contends that is not the intent of Prop 207 and the program should be structured to avoid that eventuality.

"It's 26 lottery tickets," Gunnigle said. "And when you think about it, that's exactly what folks will be incentivized to do because the way to the rules are currently written, there's no access to capital provided from the ADHS, so unless a social equity applicant is independently wealthy, or has that access, they're going to have to rely on investors."

The proposed rules have reduced the fees for social equity licenses from $25,000 to $5,000 and potential licensees do not have to have $500,000 in liquid assets or have a location secured prior to applying for the license, which makes it even easier to game the system if there is not more oversight.

While the new rules may not be ideal, at least ADHS has taken some public feedback into account.

In February 2021, a coalition of stakeholders from disproportionately impacted communities sent a letter to ADHS Director Cara Christ stating opposition to the first draft of the rules and outlining possible alternatives to create a more equitable program.

The group asserted that the first draft of the rules failed to appropriately define "communities disproportionately impacted" because it did not focus on geographic areas where disproportionate arrests occurred; did not create a sustainable program to reinvest in communities; forced all applicants to attend DHS-provided training, and declined to create any mechanism for evaluating the program's success.

While some of those concerns were addressed, there are still a lot of holes in the rules that will probably not get plugged before the final program is rolled out.

Gunnigle says there are ways to make the program better, but said she is not optimistic there will be further changes in the future.

"There's a range of things that can be done to make it better," she said. "You could restrict [license] transfer for a number of years; you could restrict transfer to other social equity applicants; you could require the applicant to place the dispensary in communities that have been disproportionately impacted to create wealth and jobs, and you could require dispensaries getting a social equity licenses to hire those from communities that have been disproportionately impacted. There's a range of creative solutions that make it so that these licenses would actually benefit the folks they're supposed to benefit. And the department has not been receptive to any of that."

Ultimately though, it's about ADHS not following the will of the voters as they craft policy behind closed doors for a mammoth industry that will generate billions of dollars annually in the state of Arizona.

"I was one of those voters that voted for 207, knowing that there were flaws in it, but [it used] selling points such as expungement as a way to repair the harm that's been caused by prohibition," she said. "I just don't see either of them going the way they're supposed to go."

Should this version be the final rules put in place, there could be lawsuits challenging AZDHS's interpretation of Prop 207 or there could be a request to change the rules through the Administrative Procedures Act, but Gunnigle doubts the courts would be amenable to such actions.

"Honestly, this was the chance to get it right," she said.

The final rendition of the rules may come out as early as Tuesday, June 1 (after the Weekly's print deadline), so cannabis-watchers throughout the state will just have to wait and see.

SB 1121: Imposed new requirements for the security, packaging and labeling of marijuana;

SB 1408: Mandated research on the correlation between marijuana use and mental illness;

While most of the bills were fairly benign and would likely not have materially affected the average pot consumer in their daily lives, SB 1408, proposed by House Speaker Rusty Bowers (R-LD25), would have continued to perpetuate the demonization of cannabis by only looking at links to mental illness in pot users.

"We are disappointed to see that these three bills were vetoed by Gov. Ducey in a tantrum over lack of movement on the budget," Southern Arizona NORML Director Mike Robinette said. "While we did not support SB 1408, we hate to see that it was also part of this blanket veto of 22 bills. It is apparent that these four marijuana bills were not vetoed over their merit and purpose but were instead shuttled due to a disgruntled governor's power play. Vetoing bills to make a political statement is certainly not indicative of a functioning and robust democratic process and we are saddened that four marijuana bills fell victim to this unsavory practice."

Another bill the Weedly has been tracking is HB 2809, co-sponsored by Rep. Randall Freise (D-Tucson), that would have placed severe limits on advertising and financial support of local events, died in the Senate last week by a vote of 18-12.

The bill would have needed a three-fourths majority to pass, given its relationship to Prop 207 as a citizen initiative.

The bill would have only needed eight votes to kill it, and it died a suitable death, but it was way too close for comfort for those advocating for the normalization of cannabis in the wake of decades of pot prohibition.