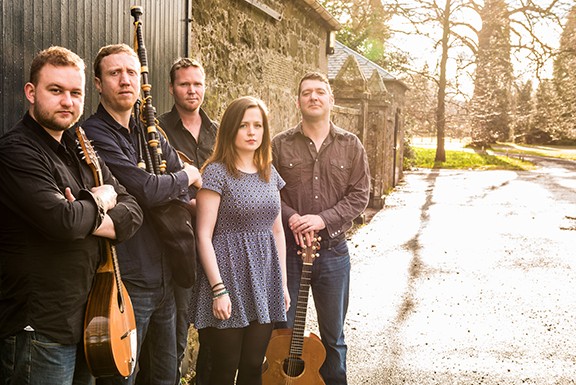 More Scotsmen—and one Scotswoman—are coming to Tucson this Saturday, just three weeks after the Old Blind Dogs piped their way to town.

Like the Dogs, this weekend's group, Daimh plays traditional Scottish music. Their instruments include the de rigueur bagpipes, played by Angus MacKenzie, a Canadian from Cape Breton who returned to the land of his ancestors, as well as the fiddle, flute, whistle, guitar, mandolin and accordion.

But Daimh also has a rare instrument, the cittern, a stringed instrument dating from the 16th century, and a repertoire of songs in the ancient Scottish Gaelic language. And the five-member band boasts an acclaimed Gaelic singer, Ellen MacDonald, whose beautiful voice won her the Gaelic Vocalist of the Year Award in 2016.

Daimh has its roots in the legendary highlands and islands in the west of Scotland, near the Isle of Skye. In the late 17th and early 18th century, the remote region was the bastion of Jacobite rebels, Gaels fighting England to replace the king with a Stuart monarch.

The title of their latest album, The Rough Bounds, pays tribute to that rugged terrain. And the band members' passion is playing the centuries-old tunes and ballads of the ancestral Gaels, though Daimh also performs newer music steeped in the old traditions.

Daimh has played in 20 nations and won the title of Folk Band of the Year in the Scots in the Trad Music Awards competition; all its members are in demand for outside gigs. Fiddler Alasdair White has decamped to New York City, but most of them still live in the storied Rough Bounds.

The Weekly caught up with guitarist Ross Martin through email last week. Martin wrote to us from his home in the Atlantic village of Morar, a Scottish National Scenic area studded with lochs and lakes. The interview has been edited for clarity and space.

You're a musician who started

out as a fisherman. That sounds like a good story.

Although fishermen and good stories go hand in hand the world over, there is nothing unusual about working at sea where I come from. The sea is a big part of everyday life and the majority of guys my age work or have worked at sea. I still go out on fishing boats fairly regularly for langoustine and lobsters, including the day before answering this question.

Several members of the band come from musical families. Did you?

I did not. My house was full of rubber boots and oilskins.

How did the band get started?

We were all living (and still live) in or around the area known locally as The Rough Bounds, the wild Jacobite stronghold. There's a lot of music and dances in the area, so we were all playing together every weekend. But we became Daimh in 1998, when we presented a project for a festival. The project was to tour the highlands presenting the musical connections between the countries in the Gaelic diaspora, namely Scotland, Ireland, Cape Breton in Canada and across the U.S.

Where did you get the name Daimh?

The name Daimh (sounds like Dive) means "kinship" or "connection." It summed up the project perfectly and just stuck as our name after that.

How would you describe the band's music?

The songs we perform range from the dawn of time up until the golden age of Gaelic crooners in the 1960s. The instrumental pieces are a mixture of old traditional tunes and our own compositions, though we attempt to write in the Highland style. Our music is part of the fabric of Scotland.

Many of the band's songs are in Scottish Gaelic.

The music of the Highlands and Islands can be defined by the relationship between the Gaelic language and the bagpipes. Many of the old instrumental dance melodies are either derived from songs or had words added later. The language gives everything a certain swing. All the songs from the Highlands and Islands were in Gaelic until about 30 years ago, when bands like Runrig began to write songs in English as well as Gaelic. Their songs were about issues affecting the area, but we don't sing anything as modern as that!

Do many people in Scotland still speak Gaelic?

Gaelic is still the first language in many Island communities and is enjoying a resurgence on the mainland too. That's due largely to the Feisean movement, which teaches music and song to children throughout the country through the medium of Gaelic. There are many Gaelic schools now too. Our singer Ellen MacDonald is a fine example, a shining beacon if you will, of the Gaelic education system.

Ellen is a prize-winning singer. How did the band get her to join?

Ellen was a music student at Sabhal Mòr Ostaig, the Gaelic language college on the

Isle of Skye, where we were working as visiting tutors. We saw the potential straight away and recruited her when she graduated. She has been widely regarded as the finest Gaelic singer for about the last four years. Basically whoever is singing with Daimh is the best singer working on any given day!

When does your North American tour begin and end?

This trip starts in California on the last weekend of September. We finish in Texas on the first weekend of November after stops in Washington, Oregon and our favorite state of all, the Grand Canyon State of Arizona. Go Cardinals!