Scoundrel & Scamp’s presents a stellar production of The Little Prince

By  Chloe Loos, Taming of the Review 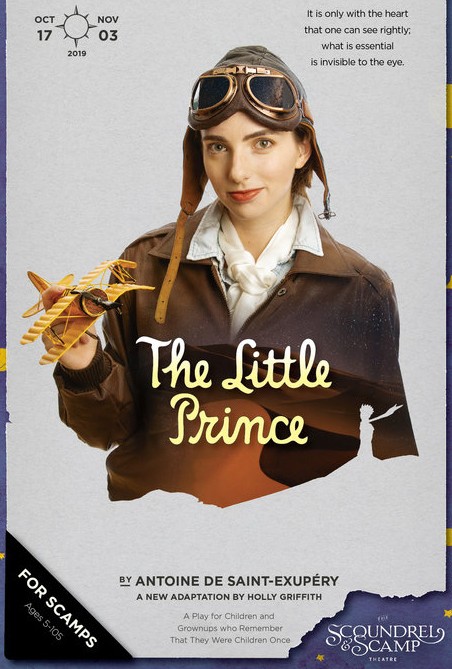 Presented by The Scoundrel & Scamp Theatre

The Little Prince is my favorite book. When I was a little girl, my mother introduced me to the world  of the enigmatic prince and all the characters he meets throughout his travels of the universe. I didn't, as most children don't, quite grasp the eternal life lessons this book has granted me. As I've grown, I find myself drawn to quotes from the book that give me clarity. Many of us likely have a similar bond with Antoine de Saint-Exupéry's 1943 novel. Entering the star-strung set, all of my nostalgia came to light.

The Scoundrel & Scamp's adaptation of the novel, translated by Claire Marie Mannle, and adapted and directed by Holly Griffith, delivers everything I so love about this book. I can't remember the last time that I was so enthralled with a piece of theatre. It's magical, it's beautiful, it's funny, it's poignantly sad, and every line is filled with deep truths and wisdom. It is in this space that we hear big truths from the little voices of both the prince both on stage and the one within us.

The ensemble cast, led by Kathleen Cannon as The Aviator, glided through this piece of work with grace. Attention was directed and kept so well; I would be so caught up in a performance that I wouldn't notice the utter magic happening on stage until they reminded me to look for it. While every single performer had moments where they either made me laugh or sometimes brought me to tears—sometimes at the same time—special shout out to Gabriella de Brequet's performance of the Rose, Cole Potwardowski as The Lamplighter, Ryuto Adamson as The Fox and each one of Gretchen Wirges' many characters. The ensemble was so strong and so striking in the physical, vocal, and character work that I sometimes forgot this wasn't a cast of 30.

The performers navigated the tonal shifts and transitions with beauty and were strongly supported by music director Feliz Torralba. Torralba's playing underscored multiple moments to the point that she and the music felt like another member of the ensemble. Her strong use of musical motifs helped us journey through the plot and tethered us to characters and emotions felt by the characters on stage and the audience.

In addition, the stagecraft was truly out of this world. The set featured a revolving platform and twinkles of starlight, supported by the incredible lighting (Raulie Martinez) which took us from day to night through sunrises, sunsets, dusk and twilight. The props were childlike and simple but imbued with a sense of playful awe. No wonder we adults still go to the theatre. Kids go, too. I stayed for the talk back and a little boy, no more than 8, asked a question about what The Prince did after the end of the story, to which Griffith noted was the same sort of question the aviator would ask. This shows that the work we choose to do, as theatre makers, matters. By allowing a space to wonder, to hope, to welcome, the art done impacts hearts and minds of all ages.

Finally, I can't remember seeing a production this diverse in a long time. Out of nine on-stage bodies, there were six women, half of whom were women of color, and three men, none of whom were white. The creative team was primarily made up of women as well. The variety of performers in this production reminds us that there is so much space for love, acceptance, and voices, if we only let them on stage. Through The Little Prince, those of us in the audience, especially those tired or excluded by lack of representation are reminded, simply, that this story is for all of us.