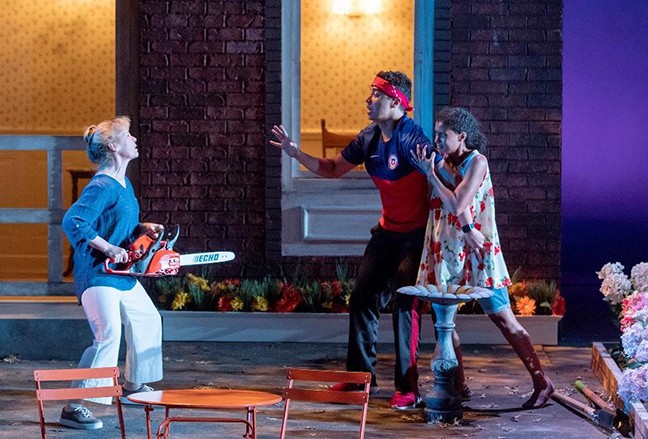 Courtesy
Robynn Rodriguez, Keith Contreras, and Arlene Chico-Lugo get tense with some topiaries.

To begin their 52nd season, Arizona Theatre Company brings us a mere whiff of a play, Native Gardens by Karen Zacarías. It's funny and well done, and all things considered, we can hardly get enough fun these days. It's especially true for our neighborhood, with talk of walls and borders and such. And wouldn't you know, Zacarías has planted some of these rather serious issues in her story line and nurtures them along rather expertly. The blossoming result of her green thumb is Native Gardens.

Her focus is on two couples. Frank and Virginia Butley (Bill Geisslinger and Robynn Rodriguez) are long-time residents of an upscale neighborhood in D.C. Frank has found in retirement a passion for gardening—of the English garden variety. The other couple, Pablo and Tania Del Valle (Keith Contreras and Arlene Chico-Lugo) have just moved in next door. They're young and ambitious and are fine with taking on a rather run-down home to make it theirs for their growing family. Tania, who's finishing her dissertation, is quite pregnant, and Pablo is a lawyer who longs to make partner in his firm. She has ideas about their little backyard, which abuts the Butleys', but she is taken with the idea of using a more natural approach to the outside space. She will depend on native species to nourish a little ecosystem, with the attendant insects and other critters that will support the sustainability of it all.

Also in their backyard is a huge old oak tree, rather in need of care. It's sort of what sold them on the house.

So, can you guess what's coming?

Well, of course you can. But Zacarías surprises us with a little table-turning and shoe-on-the-other-foot unpredictibility. This perfectly skews what we think we see coming and puts the kibosh on our potential judgments.

The two couples have been introduced with neighborly visitation involving wine and chocolate and, of course, more than a bit of curiosity. There are assumptions by the well-established couple made about the ethnicity of the newcomers, who are rather dark skinned and dark haired, an assumption which is challenged by Pablo and Tania as the couples converse one fine evening. They are not Mexican. He is from Chile and she is from New Mexico. The talk turns to Frank's lovely flowers and the younger couple asks if it would be a problem if they took down that awful and broken chainlink fence separating the two yards. Not at all, is the reply, and thus begins the discussion of their differing approaches to gardening. Do you use pesticides? Queries Tania. Constantly, Frank replies.

What facilitates the drama of the piece is that Pablo has made a rather bone-headed and thoughtless invitation to his entire firm to come to a party the next weekend, thank you very much. But since the house is in disrepair and disarray, the couple decide that perhaps they could get the yard in shape. They will replace the chainlink fence with a wooden one and scurry to plant and prune their habitat into a version of readiness for company.

That's when it happens. In reviewing property lines, the young couple discover that the well-off white folks (yes, it's come to that because, by this time, a few issues had been tweaked by uncomfortable folks on each side of the fence) had actually been gardening beyond the legal property line.

Zacarías muddles things here. Frank is yearning to win the neighborhood Horticultural Society award, and his garden will be judged next week. Besides, they've used those flower beds for years. But company's coming and the fence needs to be up in just a few days, sneer the new neighbors. We almost want to scream out, just postpone things until cooler heads can prevail. But, no. Wouldn't be much at stake in the present, which is where we need it. So we sigh and carry on.

Tania seems likely to give the neighbors the extra few square feet, but ordinarily laid-back Pablo makes a strong case for reclaiming what's rightfully theirs, especially when it's actually a matter of money—by his calculations, $38,000. That's enough to get Tania riled, and her "let's work things out like we women can do" leads to an explosive blast of Spanish-language unpleasantries.

Although there is predictable comic stuff happening here, Zacarías gives us some real fun as she plays with role reversals. For instance, legally, Frank and Virginia can claim adverse possession, informally known as squatters' rights. These two? Heavens! That leads to an exclamation by the youngsters, "You mean, we're the man?"

Although just about every ugly "-ism" in the book—racism, ageism, classism, sexism all get a moment and a laugh— Zacarías isn't creating a heavily weighted discussion. No, they are there because they need to be, but it's all in fun.

Jane Jones directs with just the right (and light) touch, and an excellent cast keeps all the -ism balls in the air while creating likable characters all. Contreras' initial enthusiasm turns to puffed up "We've got the law on our side" strutting and fretting, and diminutive, laidback Tania shows she can be tough-as-nails when provoked. Rodriguez wears her staunch Republican sensibilities with ease, but is not above reaching for a chain saw if necessary. And quiet but entitled Geisslinger so loves his flowers, he's quite willing to caress and kiss them.

Carey Wong's set is fine, although there is just really nothing you can do to convince us that Frank's flowers are the real deal. And Brian Jerome Peterson's sound is terrific, especially as a group of enthusiastic landscapers appear from time to time to begin their work on Pablo and Tania's backyard.

Native Gardens is a nifty little piece that pokes at all of us, no matter our persuasion, and our need to establish a line in the sand to announce this is mine, that is yours. It matters little that when the wind changes direction, that carefully determined line will likely disappear.