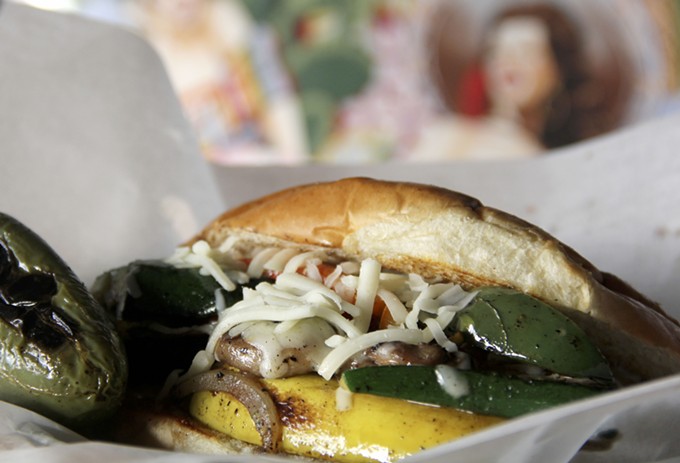 Let's taco-bout Rollies Mexican Patio. Making its grand opening just before the new year, it is the freshest addition to the 12th Avenue restaurant scene in South Tucson. Rollies specializes in rolled tacos (hence the name "Rollies") but the menu offers a variety of other tasty, edible treasures that separates this place from the abundance of other Mexican restaurants in town.

"There is a lot of competition down here," says Mateo Otero, founder of Rollies. "I wasn't trying to do the same concept everyone else is doing, like carne asada. I wanted to do something different."

That is exactly what he did, with unique takes on the menu items, whether they are tacos or tortas or flat tinga enchiladas.

"I have a fusion of Northern and Southern Mexico, but with more of a Sonoran flare," says Otero, who also incorporates his own family's Sonoran rooted traditions, as well as his own spin into his dynamic dishes.

So rolled tacos, huh? Doesn't seem so uncommon until you see them. "Drowning" as Otero describes them. Drowning in sauce, that is.

"No one does that in Tucson," Otero says. "My aunt used to make them for us when we were kids. It always stuck in my head. I love them, but I could make them my way."

His way actually goes in two directions. Choose between the path of rojo (dressed with cabbage, crema, pickled onion and cotija cheese) or queso (dressed with green onion, and roasted green chili.) They can be rolled around chicken, beef or cauliflower. That's right: Rolled cauiliflower tacos, making these drowning delectables available to vegetarians, too.

That's not all vegetarians have to choose from. There is also the "barrio hipster" torta (the Mexican version of a sandwich). The hipster is torta-lly worth checking out. The veggie torta glistens with juicy roasted mushrooms, peppers and zucchini peeking out the sides under caramelized onions and melted Monterey Jack cheese. Adding some pina pico can really make this the ultimate master vegetable piece. Nothing wrong with being a little extra. The hipster could easily appeal to meat-eaters as well, especially if they add make it "cochi style" (add bacon) for only a buck more. You can "Cochi style" up any of the tortas or a side of tots for just a dollar extra.

Another Torta worth mentioning is the Picoso. Chili fried chicken, under a bed of habanero coleslaw, it is as popular as it is picante. According to Otero, the origins of this torta are not Mexican at all, but Tennessee. It was inspired by the Nashville "hotbird," and has evolved to a bird of its own, flying in the mouths and hearts of Tucsonans.

Then there are the flat enchiladas. However, calling them "flat" is quite misleading. The only thing flat about them is the flat corn cakes that rest under mountainous piles of toppings. Choose a base of Pibil (pork), Tinga (chicken), or Shrimp. Each is adorned with different garnishes suited to the given flavor profiles. Pibil is chili citrus pork, originating in Southern Mexico.

"I tried the citrus pork one time and I loved it—put it on my catering menu," says Otero, explaining the origins of his own customized Pibil dish. His Pibil started as tacos topped with pina pico.

"Everyone loved it," Otero says. "When I was making my menu I knew I wanted to do some flat enchiladas so I put the pibil on those, bringing the pina pico with it."

"Tinga is also from Southern Mexico," Otero says. "It's a chipotle chicken. People from Sonora also do tinga, but they add chorizo to theirs. I did my tinga my own way."

He left chorizo out of his version, but added red chili in its place. The red chili addition was inspired by his Sonoran background, by his mom's chicken. He kept the southern chipotle, bringing the flavors of two regions together once more, while making it his own.

"There is a lot of flavor," Otero says. "I am big on flavor and flavor profiling. Nothing overpowers anything... it is totally balanced."

Family traditions play a big role in his approach.

"I picked up few tricks up from watching my nana and my aunts cook," he says. "It all comes from Sonora, and I just stuck with it. Since I was a kid, I was always trying to match my nana's (grandmother's) beans. She would never tell me the recipe, she wouldn't tell anybody! But I think I got 'em down."

Otero's version of his nana's beans are available as a side on his menu, in addition to tater tots, chips, queso and street corn salad. For dessert, there are ice-cream sandwiches topped with whipped cream, dulce de leche and nuts stuffed between your choice of a cochi (pig-shaped gingerbread cookie) or a concha (a bright seashell sweet bread.)

This isn't exactly his first rodeo in the kitchen. After graduating from Le Cordon Bleu in Scottsdale, he ran a catering business for about 13 years, which inspired a few of the current recipes on the menu. He has been passionate about cooking most of his life.

When he was a kid, he spent a lot of time in the kitchen. His tata was a chef who moved from Hermosillo in the 1960s and was a chef here in Tucson through the 80s. Young Otero would go to the kitchen with him and realized, when he was just 5 years old, that he wanted to be a chef.

"I remember watching him melt butter and I thought it was the coolest thing ever, and right then I just knew," Otero says. "My brothers and sisters would be watching cartoons on Saturdays. I would be making chorizo and eggs and burning the crap out of everything."