When in Vail, roll into Bowld for some unconventional yumminess 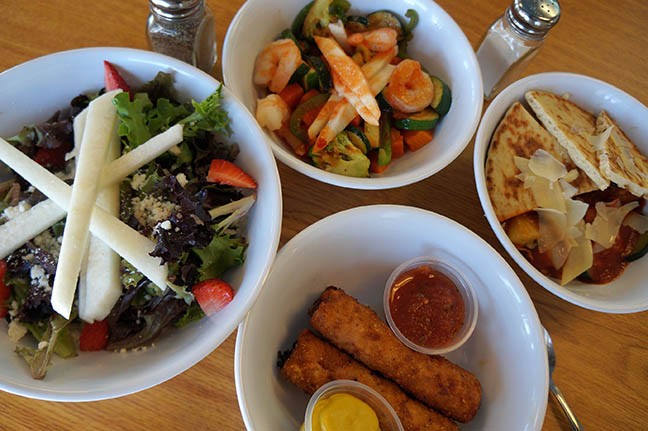 There's a scene in the 1979 Steve Martin comedy The Jerk where he is sharing something called "pizza in a cup" while on a date with Bernadette Peters. At the time it seemed so idiotic, like how would you deconstruct pizza enough to fit it in a cup? Better yet, why would you want to eat pizza out of a cup?

Local chef and restaurant owner Eston Stogner took that laughable notion from the movie, turned it upside down and thought: To heck with a cup...let's do pizza in a bowl!

OK, that's not how Stogner's comfort food take on a healthy option eating started, but that's how I imagined it in my head when I bit into a surprisingly delicious pizza bowl.

The eternal debate over pineapple being allowed on pizza is one for the ages, but for me, and the Spicy Hawaiian variety at Bowld should eliminate any and all argument. All incorporated ingredients—ham, bacon, jalapeno, zucchini, and, yes, pineapple over fresh noodles and in a house-made marinara—literally had me giggling due to the Steve Martin reference mixed with an extraordinary flavor integration. It just worked. Really? Pizza in a bowl. Never thought I'd see the day.

"This is actually my first experience working in a scratch kitchen," says Stogner. "Before this I worked in a lot of corporate kitchens, mostly managing. During that time, my wife and I started a meal prep service that took off enough that we caught the attention of the investor of this operation. To say the least, I hit the lottery."

Set in a location once occupied by a sandwich chain, right next door to a burger-and-milkshake franchise, Bowld has made a name for itself in the Vail food game with minimal advertising or hustle. On a stretch occupied by those either entering or escaping Vail, with almost no exterior notification, Bowld's healthy and delicious food has been embraced by locals.

Stogner's menu is both inventive and tasty. He considers the watermelon shrimp bowl to be a signature dish that required a lot of time and trial to get right. At the base, there's a hash of sweet potatoes, seasonal vegetables and shrimp sautéed in a tart watermelon sauce, topped with bright and crunchy jicama. Totally simple but it made total sense.

If you don't fancy eating your food in a bowl, there's a hamburger that's served up in the traditional style (mercifully, since a cup 'o burg would be overkill).

And Stogner's dedication is illustrated by the fact that he lives in Oro Valley but begins Bowld's breakfast service at 7 a.m. Be sure to check out the bowl featuring house-made chorizo, bell peppers, cheese and farm-hatched eggs because it is a decadent way to start the day.

Salads range from strawberry feta to Caesar to vegetarian taco to all things fresh and locally sourced. Bowld offers weekly change ups to their take-and-bake menu, depending on what Stogner and his crew can get in season.

It's all simple but delicious. Once you stumble across Bowld, you might just wonder: "Now why didn't I think of that?"