Samuel T. Herring's dance moves on "Letterman" brought a lot of attention to Future Islands in a hurry

The American pop and rock landscape of the early and mid-2010s is shaping up to be very reminiscent to the 1980s, where there is no particular stylistic dominance of any subgenre, compared to the commercial breakthroughs of both alternative-rock and gangsta rap in the 1990s, for instance. Several striking parallels can be drawn between the current era and that of 30 years ago—the music industry's inability to fully grasp changes in the way music is distributed, marketed, and consumed (the onset of MTV and the "home taping" scare of yesteryear, and today's climate of streaming and downloading); the leveling of the playing field with regards to technological advances (affordable forms of electronic instrumentation and computer-based production); and the countless examples of splintering variations born out of the previous decade's respective stylistic innovations. This situational confusion and fragmentation played a major role in the post-punk and post-disco new wave pop of the first half of the '80s becoming a joyful playground of (sometimes undeserving) one hit wonders who rarely became career artists.

Perhaps by coincidence, Future Islands' style is reminiscent of Roxy Music's robotic soul, which was enormously influential on much of the old new wave. The Baltimore trio has released four albums since debuting in 2008 with "Wave Like Home" (Upset the Rhythm), thus far peaking commercially and artistically with this year's "Singles" (4AD). Only time will tell if Future Islands' lovelorn, swooning synth pop will have a lasting impact. After all, by 1984, Devo was considered a flash in the pan.

"Singles" is a fine record and a product of its time, as well as the original MTV era—less domineering than either Daft Punk or, say, Spandau Ballet and as hammy than both. Which is to say it's memorable and punchy, but neither trailblazing nor overly portentous. Future Islands' greatest asset is singer Samuel T. Herring. Although his physical appearance—diminutive and significantly older than a teen pop star—doesn't suggest icon status, he is blessed with an exceptionally expressive voice and an unencumbered performance style. Herring's idiosyncratic and emotionally gripping singing is as odd and distinctive as any of his forebears. His blue-eyed soul crooning—alternately smooth and raspy—powers tracks like "Back in the Tall Grass," "A Song for You and Me," and Singles' modest hit, "Seasons (Waiting on You)."

Despite making regular appearances on the alternative/indie festival circuit and earning a dedicated cult following over the past few years, the majority of the general public was introduced to Herring and Future Islands via a startling and nakedly emotive performance of "Seasons" on "Late Night with David Letterman" this past March.

Before Herring even started singing, he stalked the Ed Sullivan Theater's stage with dance moves so outlandish, so grandiose, so flamboyant, so unpredictable as to be an unmistakable parody of Broadway-style theatrics. He punched the air, pounded his chest, and pleaded into the camera. Dressed conservatively in all black with thinning hair, he sang into the microphone: "Seasons change / People change." One minute into the track, he was almost to the brink of tears. Two minutes in, his croon became a croak not too far removed from death metal vocalizing. It was an unforgettable performance and probably will be the band's defining moment.

But the most shocking factor of Herring that night was that he wasn't joking. He was completely authentic when he was supposed to be an actor. It was supposed to be safe and sanitized and pretty. But this man somehow slipped through the cracks, against the better judgement of executives at record label and marketing meetings, managers and advisors. This is not how records are sold in the age of American Idol. This wasn't supposed to happen.

Yet it did, leaving Herring and Future Islands, for a few minutes, as a real alternative to manufactured pop music and prefabricated rock subgenres. And if the progression of time turns the band into a one-hit footnote, they still usurped and subverted the star-making machine in an undeniable and truly affecting way. 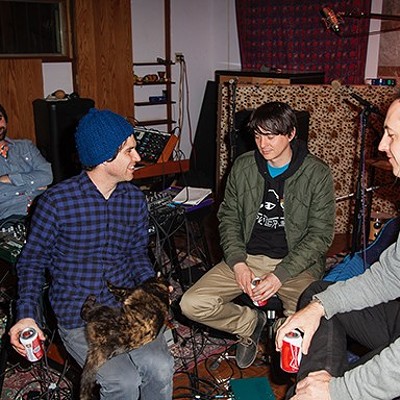