While most nearby residents want the county to take over a bumpy Vail-area road, liability concerns have led to a delay 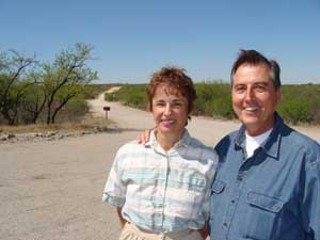 Mari Herreras
Cathy Hufault; with husband, John: "We want to help them understand the importance of this situation. If waiting 30 days helps, then we are happy to wait 30 days."
People either love or hate X9 Ranch Road. While driving the 3.8 unpaved miles of exposed bedrock, you can feel every tooth-shaking groove, bump and rattle.

Those who love the road--off of Old Spanish Trail southeast of Tucson and just down the hill from Colossal Cave--say it's a buffer that protects the rural neighborhood from crime and unwanted recreational bicyclists who use other nearby roads.

Those who hate the road say its conditions delay emergency vehicles and create dust pollution--problems easily remedied with some fresh black pavement.

Last week, the Pima County Board of Supervisors got an earful from residents with both perspectives when a proposal came before them asking the county to take over X9 Ranch Road. Residents are prepared to pay almost $1 million of their own money to have the road paved to county specifications.

Ron Hilliard was one of two residents who told supervisors that the road keeps out crime, maintains the rural character of the area and would be more dangerous if paved. However, other residents--representing the majority of those in the X9 Ranch subdivision--their attorney and even Pima County Transportation Department Deputy Director Ben Goff told supervisors that declaring X9 Ranch Road a county road should be as routine as the county taking over any other road at the end of a subdivision build-out.

In fact, at the same April 15 supervisors' meeting, an extension of Swan Road that is part of a KB Home subdivision was taken over by the county in a unanimous vote, Goff pointed out.

The supervisors eventually voted 4-1 in support of Goff returning to the board in 30 days with a staff report regarding potential liabilities the county could face if it took over the road.

Residents Cathy and John Hufault said that while they were surprised by the vote, they couldn't fault the supervisors for having liability concerns, first brought up by Supervisor Sharon Bronson. Supervisor Ray Carroll, who represents the X9 Ranch area, voted against the 30-day delay.

"We understand they may need more ducks in order and feel this is a unique situation," Cathy Hufault said. "We want to help them understand the importance of this situation. If waiting 30 days helps, then we are happy to wait 30 days."

The private road's right of way now belongs to the Rincon Water Company and was given to the company by X9 Ranch's developer. The Henry W. Jackson Family Trust provided the company with $150,000 for the road's lifetime maintenance. However, that money is running out, and the road often gets washed out during monsoon season. The water company no longer wants responsibility for the road.

Many X9 Ranch residents said that responsibility should have originally gone to the Jackson family as the property's developers. Today, according to county regulations, developers are required to build access roads to county specifications before the county takes over property.

The Hufaults moved to the area in the mid-1970s and said the road has always been a point of contention. In the 1990s, the family dissolved the trust, and area homeowners sued the estate to resolve the issue of road responsibility; the court determined members of the trust remain responsible, although there has been no final resolution.

A year and half ago, X9 property owners who wanted the road improved formed a limited liability corporation and began collecting pledges in order to pay for the road work. About $750,000 has been raised thus far for the estimated $1 million project. The Hufaults said former Jackson Family Trust members have told X9 property owners that they may contribute the remainder needed to pave the road.

Meanwhile, the Hufaults said interested homeowners began talking to the county, through Goff first, and eventually Carroll. Carroll told homeowners to do a survey to find out how many residents approved of paving the access road.

The survey showed 41 property owners support paving the road, while 19 residents are opposed.

"We have struggled for years to find a workable solution," Cathy Hufault said. "We are a diverse group of property owners ranging from those who bought 25 to 30 years ago when property was much cheaper, to those who have recently bought and built larger homes here. Many in our group do indeed live in modest homes on modest incomes."

Although critics of the pavement project told supervisors a paved road would be far more dangerous for drivers, Cathy Hufault said emergency-vehicle-response delays and other issues are far more important.

In 1999, X9 Ranch homeowners received a letter from the Rincon Valley Fire District saying that emergency vehicles would have to drive the road slower than fire officials would like, but the condition left them with no choice.

Then in 2002, the U.S. Postal Service notified residents that its vehicles could no longer travel the road to deliver mail at the subdivision entrance.

Cathy Hufault said when her mother was transferred to a hospital before her death, the ambulance ride out was particularly painful. Hufault said the bigger shock came when hospice officials told her they could no longer serve the subdivision.

At the April 15 meeting, X9 Ranch resident Nina Roosevelt Gibson recalled the difficulty emergency vehicles had arriving when she went into cardiac arrest. She said she ended up flat-lining while being lifted out via helicopter.

These examples were enough to drive X9 Ranch residents to do something to solve the dilemma. Hufault said she wonders if the county thinks it's too unique to have a group of residents willing to pay for a project.

"We've been working with Ben Goff (from the county) for almost two years, but, no, we haven't talked to the supervisors directly, except for Ray Carroll," Cathy Hufault said. "I guess we caught them by surprise."