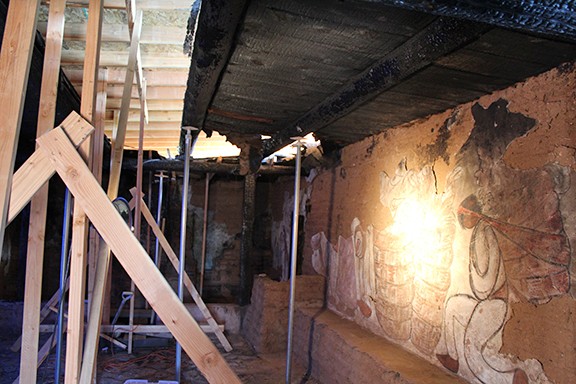 Jeff Gardner
One of the damaged frescos and reconstruction equipment in the DeGrazia chapel.

On Memorial Day 2017, votive candles set ablaze the chapel at DeGrazia Gallery of the Sun. From the altar, the fire spread to the roof, damaging fresco paintings and religious and historic artifacts. When firefighters stopped the flames, their spraying water damaged the building's adobe framework.

"It was bad," said Lance Laber, executive director of the DeGrazia Foundation. "So much was destroyed."

Jeff Gardner
Fire damage in the chapel left a beloved section of the DeGrazia Gallery in the Sun Historic District charrred and severly damaged.
click to enlarge

Along with having to replace the roof, the fire left the Gallery at a crossroads for reconstruction: What to do about the damaged art?

"We weren't quite sure what to do," Laber said. "We weren't going to repaint anything, because DeGrazia isn't here. We may replace it with photos."

Reconstruction was originally planned for October 2017 but got delayed until March. Although Laber and other gallery workers have spent the last few months shoveling melted adobe and hauling wheelbarrows of burnt wood from the site, they accept that the fire is part of their history and are not going to let it stop them.

The gallery still hosts local artists and, with it being winter in Tucson, tourism is abundant. Just last week they premiered one of its first exhibitions since the fire: DeGrazia's encaustic paintings.

Encaustic, or hot wax paintings, are made by dripping colored wax onto a surface. The wax is either colored to begin with or painted over. Jim Jenkins, collections manager for the DeGrazia Gallery, found the encaustics after discovering that a waxen painting on display was misidentified. He wondered if any other encaustic DeGrazia paintings were misidentified, or simply uncataloged.

"We have over 14,000 pieces of art here," Jenkins said. "There were originally 17 buildings on this property stacked ceiling to floor with art, and he didn't keep records."

He dug through the works and found a total of 25 encaustic paintings, 18 of which had never before been displayed, and six that were altogether newly discovered.

Jeff Gardner
DeGrazia’s encaustic paintings are on display at the gallery, located at 6300 N. Swan Road.

"The only things he threw away was stuff he didn't like," Jenkins said. "If he liked a painting, he kept it. He'd try to sell them but never lowered the price. So if it wasn't sold, he'd just put them in a storage shed. He did that for decades."

DeGrazia's encaustic period lasted from 1953-57; however, painting with both oil and beeswax did not suffice for the prolific creator. During that time, he also worked in ceramic, sculpting, watercolor and more.

"These new encaustic pieces are just different than what many expect," Laber said. "Some people think he just did paintings of little Native children, but he's so much more."

Those years proved to be an exceptionally busy period in a life full of proliferation. Allegedly "the world's most reproduced artist," DeGrazia became a Tucson staple with his intense art output, self-marketing and charisma.

"It was almost like a cult-of-personality around DeGrazia," Jenkins said. "We have so many portraits of him that other artists painted, almost like fan letters."

Although he passed away in 1982, many locals have fond memories and pictures with DeGrazia, including Laber, who grew up as a neighbor to his family.

"I found out who DeGrazia was at a very young age," Laber said. "And getting to work at this place is such an amazing deal. There is original artwork, gold, jewelry—it's like a treasure hunt. I knew after one day this place was too good to walk away from."

And as for the future, both for reconstruction and after, Laber said: "Though it is a finite amount of art, it is a huge finite amount. We have enough art to keep putting up exhibits for many, many years."