Arizona Theatre Company
Temple of Music & Art, 330 S. Scott Ave.
Through Saturday, Sept. 28 at various times. No performance on Monday or Tuesday next week.
$25 to $70
Tickets available at box office, or by phone, or online 622-2823; arizonatheatre.org
90 minutes. No intermission.
NOTE: The play continues at Herberger Theatre in Phoenix, Oct. 3 through Oct. 20. 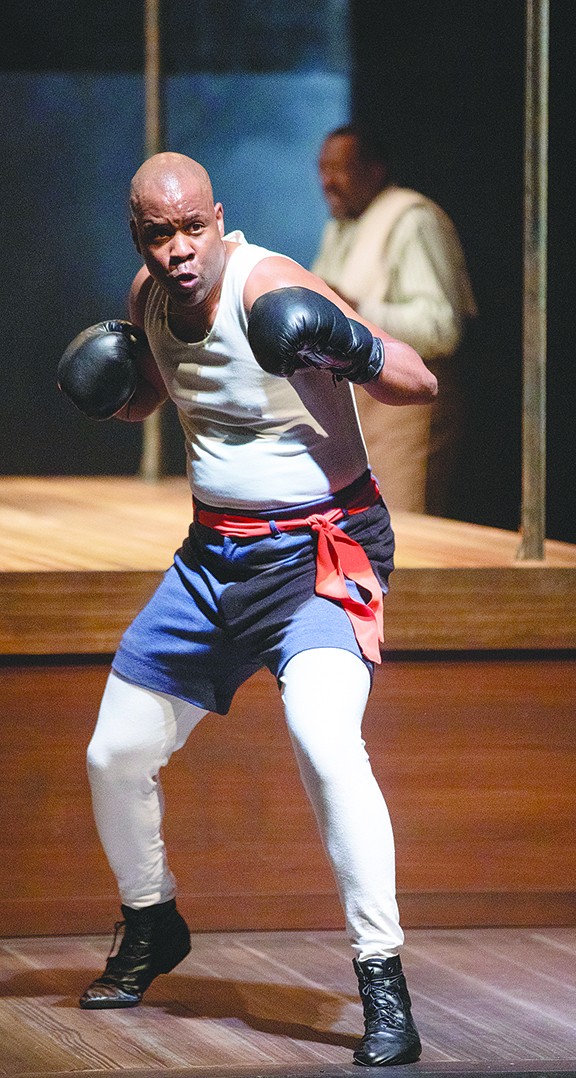 Tim Fuller
Bechir Sylvain stars as a boxer during the days of Jim Crow in the ATC production The Royale.
Early in the brilliant play The Royale at Arizona Theatre Company, we learn just how determined a  boxer named Jay is.

His white manager is whining that he can't get the powerful "people in the front row" to pay any attention to a black boxer like Jay.

"You forget how good this boy is," Jay's black trainer, Wynton, shoots back. Jay's even made the paper, albeit on page 5, where stories on black athletes are buried.

But the boxer demands to know why he's not on page 1. Wynton scoffs. Who cares about making the front page?

Jay doesn't hesitate for a second.

It's 1910, the height of Jim Crow, and Jay (an electric Bechir Sylvain) is a once-in-lifetime boxing talent. He's big, he's brawny and he's determined to get to the top. Self-confident and proud of his prowess, he's a bit like a Muhammad Ali, who half a century later would call himself "The Greatest."

Jay has already beaten the best boxer in Australia, in a win that made him the Heavyweight World Champion. But back home in the USA, he's still scorned as the "Negro" champ.

Jay is determined to change that. He wants to be known as the best boxer anywhere. Period. No caveats.

This seriously great—and timely—play by playwright Marco Ramirez is loosely based on the real-life black boxer Jack Johnson (1878-1946). Like the fictional Jay, Johnson was a charismatic boxer who was supremely talented.

But his rise to the top of the sport in the early 20th century divided an America where the KKK was surging and violent raids and public lynchings were rampant. Johnson's successes were followed by violence and deaths. Some 20 black Americans were murdered because Johnson rose.

The Royale covers similar ground. The play, just 90 minutes long, combines a sport story with a devastating accounting of racism in the U.S.

Trainer Wynton (Edwin Lee Gibson) tells a horrendous tale from his early boxing years. He and five other young black boxers were blind-folded and put in the ring with orders to stay until one of them felled all the other players. White people in the seats relished the carnage: it was a match as savage as a forced cockfight.

Even Max (Peter Howard), Jay's mostly genial white manager, casually calls black boxers "bears." (His star client has to tell him: I am not a grizzly.) At a press conference, white reporters ask Jay openly racist questions, demanding to know if he boxes to wreak vengeance on the white race.

The picture grows even darker when Max finally sets up a match between Jay and a retired world champion; the opponent aspires to be the Great White Hope who will crush the "colored" boxer's dream.

Under the deal, the white boxer will get 90 percent of the profits, win or lose. Jay so badly wants to show his chops that he agrees to the outrageous terms.

Movingly played by Sylvain, Jay is horrified by the violence that erupts around the nation even before the fight. Black fans down in Alabama are assaulted. In the Midwest, his young nephew is threatened. And the day of the match, the police find guns in the crowd.

Jay is in agony, pulled between his thirst for victory and the certain violence that his win would cause.

Director Michael John Garcés deftly guides Sylvain and the other four actors through the thickening horror. In his hands, the tale is told sparely; the players often stand and gaze at the audience, as a sort of Greek chorus. And in place of elaborate boxing choreography during the fight scenes, the boxers jump lightly in place, and that chorus alerts us to the boxers' direct hits with rhythmic clapping and shouting.

All five actors are excellent. Gibson as Wynton is all carefully guarded emotion, and Howard captures the complexities of a white man managing a black star. As the sternly silent Nina, Erica Chamblee moves almost invisibly in the background—until she doesn't. Roberto Antonio Martin the lightens the mood as Jay's cheerful young sparring partner. And Sylvain is just plain magnificent.

The lighting by Allen Willner is almost a character, moving nimbly between light and shadow, between triumph and tragedy. The remarkable set by Misha Kachman is so austere it's almost an abstraction. The ring is a plain platform with no fencing, and punching bags dangle from the ceiling on ropes.

Sometimes that platform and those high-hanging ropes suggest much more than boxing. Sometimes they seem to metamorphose into a weapon, one that has killed so many African Americans: the platform suggests the gallows and the ropes evoke the noose.

America is suffering through an openly racist period right now, but the forgotten histories of African Americans are finally being told, by scholars, by journalists—and by artists, like the team that brought us The Royale. And new ATC director Sean Daniels deserves kudos for choosing this provocative play as the first show of his tenure.