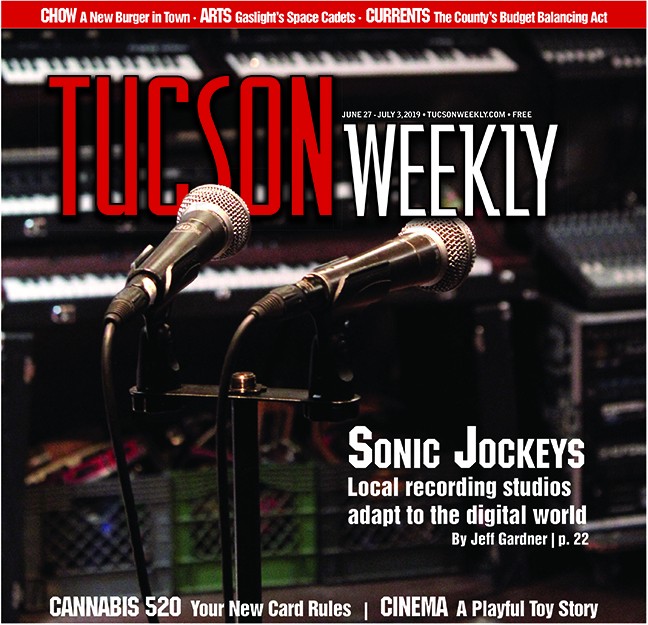 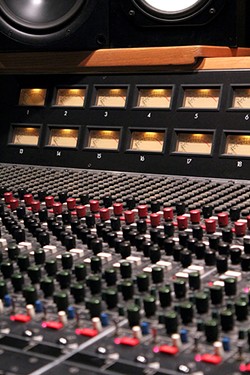 Long before musicians recorded in Tucson, the dust was here. But ever since locals began fusing folk, mariachi, rock and Tejano music onto tapes and vinyl records, that same dust has had the chance to (quite literally) become part of the music. Like changing cooking recipes at higher altitudes, so does location change the recording process for music in the Old Pueblo; when soundwaves and recording equipment get to catch the ambient dust, Tucson records literally contain the sound of the desert, at least according to WaveLab Recording Studio founder Craig Schumacher. But those gritty winds are shifting.

"Tucson has this sort of three-chords-and-a-cloud-of-dust type rock," Schumacher says. "Tucson has a lot of imperfections, but we're kind of proud of our imperfections. We like to complain about our potholed streets, but we wouldn't know it any other way."

Schumacher runs WaveLab Recording Studio in downtown Tucson. Inside an unassuming building, the walls are lined with guitars, the floor is covered with various keyboards, and there are enough amplifiers to most likely blow the roof off the studio—soundproofed or not.

While the studio has housed recording sessions of every genre, WaveLab is especially known for its close association with Tucson's borderlands style of music: earthy folk rock influenced by the jangly sounds of the '80s, occasionally gilded with mariachi brass and other Latin American leanings.

Schumacher began recording and producing music out of his garage in '85 with first-generation MIDI equipment, but it wasn't until the mid-'90s he launched WaveLab. Over the past two decades, musicians like Neko Case, Iron & Wine and Amos Lee recorded at WaveLab, as well as those who helped define the Tucson sound, like Calexico and Giant Sand.

But the times, they are a-changin'. Like the rest of the Tucson economy, ever since the Great Recession, business has been more challenging for WaveLab. This, coupled with a rapidly shifting music industry, has left Schumacher in a predicament. Whereas studio time used to keep him busy, he says WaveLab can now go weeks without business.

"Recording studios may very well go away—we're at a very dangerous crossroads for music," Schumacher says. "The lines behind talent and popularity are getting blurred. You have to work really hard now, the system is kind of broken. Musicians are at a place where if they don't tour, they don't have a living... And they don't often have money to use recording studios."

While Schumacher says he loves the digitization of music for its near-endless editing and mastering capabilities, he also feels it's led to lower-quality recording techniques fused with a popularity-over-talent ethos on music streaming services. It is not uncommon for some musicians to ask Schumacher to master the album they recorded on their phones.

"What I view as a real threat is how people's desire to be famous is greater than their willingness to make art," Schumacher says. "If engineers like me don't stand up for the integrity of our craft, the bar will just keep going down. I'm proudly stubborn."

One of the ways Schumacher is keeping WaveLab busy is by shifting from being an audio recording studio into more of a full production studio. Musicians who record at WaveLab can now have their sessions live streamed, and leave with a music video as well as the recorded audio.

"It's a natural progression. It's reinventing itself," Schumacher says. "But Tucson continually prides itself as a community of artists. We're stubborn here. At the end, we'll say, 'No, we still have our instruments.'"

According to Schumacher, up to 12 musicians have performed inside WaveLab at once. This large capacity, plus the wide array of guitars, classic keyboards, horns and more, make WaveLab perfect for recording the vast Sonoran soundscapes.

"It's like a playground for musicians," says Jacob Acosta, a local singer and songwriter who's recorded multiple albums at WaveLab. "They did a really good job of creating a lot of resources there. Craig and Chris [Schultz] are helpful not only as engineers, but as supporters of local music."

Since 2010, Acosta has recorded six projects at WaveLab, both for solo albums and in bands. He says one of the best features of studios like WaveLab, aside from the space itself, is the interaction with engineers and like-minded professionals. Working with Schumacher allowed him to flesh out ideas in ways he wouldn't have thought of by himself.

"They help make what I'd call the whole 'Southwest genre,'" Acosta says. "It encapsulates elements of rock 'n' roll and Mexican and Tejano music. It's like having the city's culture mixed into a sound... It's like a small mecca of music. There's also a huge diversity of bands in the genre itself, more diverse than even larger cities. Some people come here just to play music, which is pretty wild to me."

One such destination for outsiders and locals alike is Jim Brady Recording Studios. And like WaveLab, Jim Brady is also facing the changing tides of music.

Behind wood panels and carpeted walls, Jim Brady Recording Studios features a 24-track machine, a grand piano, more than a dozen varied and vintage microphones, a Hammond organ and more. The 26-by-36-foot performance room has hosted multiple local theatre companies, orchestras and choruses, as well as a wide variety of local rock and bluegrass bands.

Since 1984, musicians like Neil Young and Faith No More, as well as those bands crucial to Tucson's music history like Linda Ronstadt and Sand Rubies, have recorded with Jim Brady.

For Brady, the dominance of electronic music and electronic production has been a long time coming. He attended the University of Arizona's first-ever music class to involve synthesizers in 1972, the same year Switched-On Bach, a fully electronic album, reached a three-year reign on top of the Billboard Classical Albums chart.

"There are so many fundamental changes that have happened over the years, it's difficult to even name them all," Brady says. "There's no way I can put the genie of technology back in the bottle." 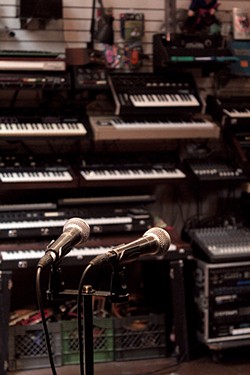 Jeff Gardner
WaveLab has been instrumental in forming the Tucson sound of music.

While Brady embraced synthesizers in music early on, he says many of the musicians who work with synthesizers today are using them for different reasons than he did: Many aren't using electronic music to find a new sound, but to simply get out of having to pay for the real instrument and recording session.

"This is a business where there's not a right way and there's not a wrong way to do things," Brady says. "But this studio is for the kind of stuff you can't do on your laptop. This studio was not built to do loops and samples. It was made for acoustically based performances and me capturing them as best I can. You just can't beat the real thing."

According to Brady, his studio being more geared toward recording classical, jazz and choral performances than other studios has kept him busy in the age of digital music. But this is not to say he doesn't record folk or rock acts, or hasn't seen the impacts on those genres.

"Twenty or 30 years ago, I'd be more likely to do a project from beginning to end," Brady says. "But now, people are more likely to use me just for the things they can't do... There are some situations where I get sent files to master and I never even see the person."

While he hasn't been forced to radically alter his business style, he has worked with more electronic and sample-based acts, though he prefers to work with the genres he knows.

"Recording studios are diversifying," Brady says. "From a purely economic point of view, it makes a lot of sense. The work we're doing now is all over the map. I don't mind doing it, but there will always be musicians who don't want to record by themselves."

Mauzy saw an opportunity when he noticed that some major record labels have been slow to adapt to the changing landscape of music production.

"A lot of studios in town are doing analog recording onto tape, and we've always been strictly digital," Mauzy says. "While it started out as a necessity, it allows for us to keep our costs pretty low as well as do overdubs and re-record easily."

While Baby Gas Mask started as a record label, they eventually expanded into a new space, opening a recording studio in 2018 as well. The studio is just outside of downtown, in a more industrial area, though Mauzy hopes to draw some of that downtown charm eastward. The curtained walls of the studio space part, allowing direct view for the sound room. There is enough room for 10 or more performers at once.

"In our new space and with our new gear and software, I think we have a very good sound," Mauzy says. "We're now comparable to the larger studios in terms of fidelity and quality."

With Baby Gas Mask being a record label, digital recording studio, and retail outlet for rare and independent vinyl all at the same time, Mauzy says they can help musicians from multiple angles, and that independent labels are increasingly becoming the preferred option for growing musicians. Ironically, he says independent record labels are moving into the future by resuscitating the past via vinyl records.

"Yeah, things are changing," Mauzy says. "There's a lot of recording studios in town, but I don't see them all leaving or anything, considering how much music we have."

To Mauzy, the changing landscape of music means there is no longer a distinct Tucson genre, but rather an ebb and flow. His own label has released LPs, CDs, and singles from a wide variety of genres, often far away from the borderlands sound. The music published from Baby Gas Mask ranges from rock to electronic to dub to specialty releases made to resemble video-game cartridges.

"There's a lot of great music in Tucson, but I don't think there's any one band that you can pin down as the Tucson sound anymore," Mauzy says. "It's really specific to each recording studio."

This sentiment is shared by Acosta, who says WaveLab is obviously the local studio more geared toward folk and rock acts.

"They've created a kind of culture of openness and creativity," Acosta says. "It's not only where any music can happen, but where anything can happen."

Of course, the same can be said for Tucson, with well-established studios changing, independent studios popping up, and new music blooming from every barrio. ■