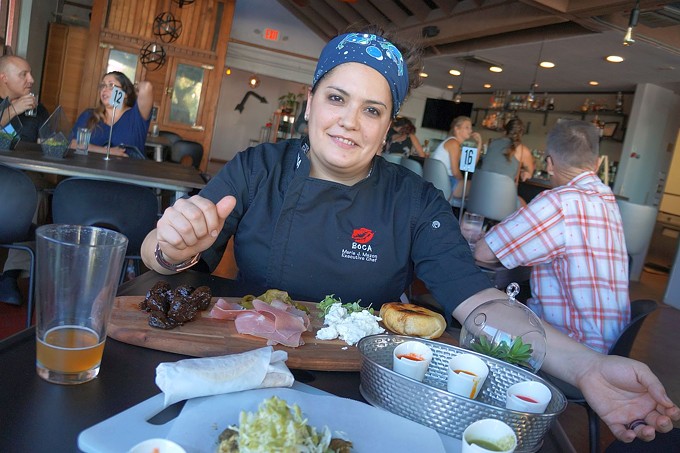 Mark Whittaker
Boca Taco y Tequila chef and owner: "The avenue has been nothing but positive."

Boca's new home on Fourth Avenue, in the old Delectables spot, is barely open, but that hasn't stopped the crowds from lining up. Still getting used to a full-sized kitchen and not wholly recovered from the big move, Mezon is conducting the chaos with the fervor of an overworked pit boss, assessing problems akin to herding squads of greased-up chickens while remaining/attempting calm as she tries to deliver her sumptuous Sonoran inspired food on time and on point. Armed with her well-known strength and humor, she runs the rhythm of her delicious dynasty with a smile, organizing staff and patrons in both English and Spanish.

"Somebody actually came up to me and said that this place won't be any good unless I start opening up my wallet. That's all I've been doing!" she laughs in spite of the stress. "When I moved in, I had to replace the roof. The air conditioning is on its way so right now, I have a sign outside that says 'No AC. Hot Inside. Cold Beer.' And I still got yelled at for that! I tell you, if it were up to me everyone would have to work in the food industry, even for just six months, to see how hard it is."

When Maria and Boca were forced out of their original location on Speedway (due to the influx of more student housing), she immediately started looking around and made bids on various venues, even the old Greek patio place near the university. She was desperate, but none of it felt right. That is, until a friend and confidant suggested her now current operation on Fourth Avenue.

"I heard that the previous owner wanted to sell so I just knocked on the door," she says. "We had a few meetings and then, boom, just like that I had my new restaurant."

Introducing you to Maria Mezon and explaining what she does with simple ingredients to make her unbelievable salsas and bodacious tacos is like watching another Marvel origin movie: You get it. You've been in Boca on Wednesdays to try one of her "exotic" tacos, like tongue, oxtail or even kangaroo, and when Maria made some of the best salsa you have ever had out of Girl Scout cookies, all you could do was wonder if there isn't anything this self-taught, self-made Tucson famous chef can't do.

Watching her cook, pour drinks, host, delegate, serve food and make grumpy customers happy put her in near superhero status in my book. Having worked in restaurants—both front and back—for many years, I know the struggle when tickets are flying out of the machine as food nears an hour to get to guests.

"I'll be honest with you—the first week we were open I was in the back sobbing sometimes," Maria says. "I was just overwhelmed. But I will say that the avenue has been nothing but positive. Everyone has been awesome. Although, occasionally, I do miss my old kitchen or what I liked to call my 'shoebox'. I knew where everything was. Now I gotta walk everywhere and go up and down stairs. My butt is killing me!"

Having spent eight years in the historically funky shell of Greasy Tony's, Maria now has the space and gumption to expand her menu, reflecting her experience and vision as a chef. Her goal is to express how Mexican cuisine can be elegant, even in the humble form of a taco. In her newly sketched horizon are seasonal salads, guacamole duos, chef's specials on Friday and Saturday night and even soup.

"All I do is eat and make soup, so having that on my menu is an obvious choice," Maria says with a wide grin. "I also want to do a chef's board. Right now I'm doing warm brie wrapped in a tortilla and chipotle pickled figs among a few other things. What I want people to know is that Boca is not a taqueria. We are a restaurant, one that specializes in tacos. I apologize if you have to wait but I am not going to bring you bad or cold food. We are good, and good food takes time. People seem to be in such a hurry and forget how to slow down and enjoy life. I worked very hard to get where I am right now. And I am very proud...very thankful."

Besides moving into her new digs and trying out new dishes, Maria is also at work on a salsa cookbook while tempting more television time. Even as her popularity grows, Maria remains grounded because when the beer line blows and the toilet overflows, a real queen knows when to hang up her crown, roll up her sleeves and take care of business.