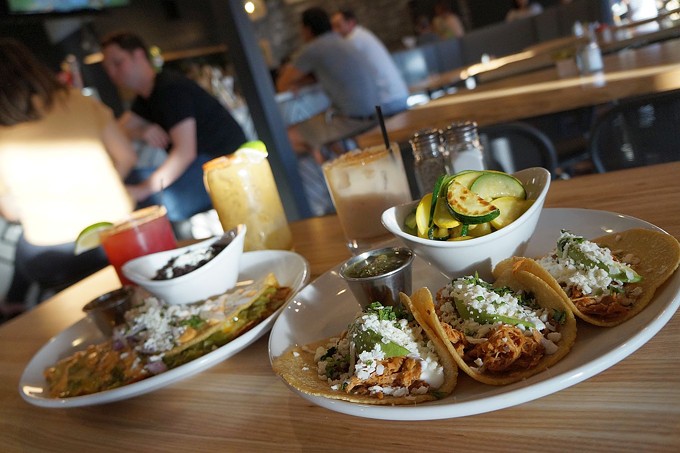 Mark Whittaker
The third incantation of Seis Kitchen is even more delightful than the last.

Yet again, we find ourselves in the rapture of another fantastic restaurant that began humbly rolling upon wheels and parking wherever they darn well please. Thing is, when you sell tacos, especially here in the Sonoran Desert, those tacos better be mega-legit and inspire long queues and online rants and praise. If not, it's a good thing you are mobile, kid, because you better skid on out of here with that dried up noise. Go sell it to some suckers that have no idea what real, regional Mexican food is about and is supposed to taste like.

Erika and Jake Muñoz started Seis as a truck and catering company over 6 years ago. They garnered so much applause and such a dedicated audience that a stationary complex was the inevitable next move. This led to their cozy corner in the Mercado San Augustin. A smart move, if you consider that the encampment is very well respected and traveled, surrounded by artsy shops and high-end restaurants. Their take on the six (hence the title 'Seis') regional cuisines of Mexico that they represent—Northern, Yucatan, Oaxaca, Baja, Mexico City and the West—transported, and translated, so well into their new venture that the only thing people had to complain about was the fact that there is no indoor seating. So, when you are craving one of their award-winning tacos such as the Poc Chuc, which is achiote-grilled chicken, or the Al Pastor, in July, you had to sit outside and deal with the heat, both from the spicy marinades and the unforgiving summer sun. Personally, I would eat mine in the car with the air on and shades down, making a roadside taco fort of both bliss and shame.

With the success of their downtown property and truck, the Muñozes were able to secure yet a third location in the Joesler Village on East River, bringing the flavors we have all come to support, and mainlined with the fantastical notion of being indoors equipped with central air. Hearing about this, cherubs bugled, and the heavens split open and rained taquitos upon us.

The menu is similar to the first location yet has expanded now that they have the arm and leg room to stretch their culinary limbs. First off, yes, they still have the breakfast burritos ($5.50-$8), which has been a personal obsession for years now. But the inclusion of chilaquiles ($8.50), which include two fried eggs and Gordita corn tortillas, can only switch one infatuation to another, making mornings even better yet tinged with dubious decisions. This is mainly because the new facility also has breakfast tacos (all $8) and even tortas (both $9.50), one of which features a beer-battered green chile and sizzled smoked bacon, while the other includes green chile pork; all of them are paired with avocado, fresh roma tomatoes, eggs and their decadent house chipotle crema.

Some of the new menu standouts, for this writer anyway, involved the Mexico City-style quesadillas ($9-$11.50) that come with your choice of protein (or not, if you have gone veg), finished with fire-roasted green chiles, locally made grated fresh cheese, Tucson-farmed cilantro and red onion, queso fresco and paired with calabacitas (essentially zucchini and corn) sautéed in local olive oil, pungent garlic and a mojo de ajo sauce. That and the chicken tinga tacos ($9.50), a traditional dish from Pueblo, Mexico, where the chicken is slowly stewed with chipotle peppers, then shredded, then placed inside handmade corn tortillas before getting a garnish of sliced avocado, crema and chopped cilantro. They pair the tacos with a house black bean mash inspired by the Yucatan region which are rich but not heavy, light without being threadbare.

These are dishes which highlight the hard work and heritage of the Mexican regions which gave Seis its name. And this is food that deserves your attention. If you are like me, you'll be back a few times to try something new, because with each plate you are essentially getting a history lesson and, honestly, the only time I'd ace a test would be if their food was the subject.

To make matters better, or worse if you consider the compulsion, is the advent of a full bar. When I took a sip of their Bloody Mary Verde ($8), made with tomatillos and a shaker full of house spices, my body relented a bit—advising that I could/should only have one. Talk about an immediate infatuation sucked through a straw. Tangy, feisty, salty, spicy and even a little sweet at the end. Luckily, Seis 2 has a patio because I had to sit outside for a spell and detox gazing at the lulling Sonoran sunset. It is easy to get hooked on attentive regional flavors such as this, but thankfully Seis is a habit I don't mind admitting to.