Refugees by Land and Sea 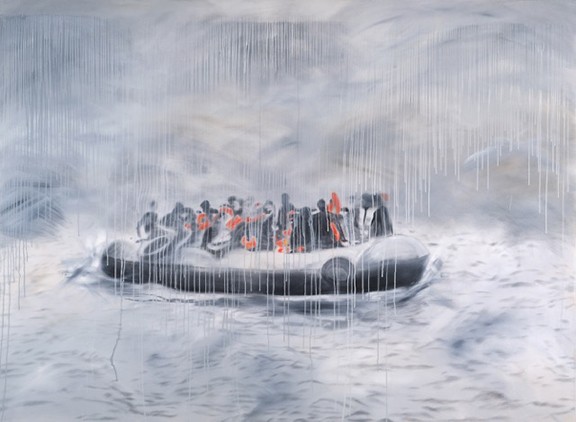 Take Nothing for Granted

Through Dec. 4
Bernal Gallery at Pima College West, 2202 W, Anklam Road
10 a.m. to 5 p.m. Monday through Thursday; 10 a.m. to 3 p.m. Friday
Free
206-6942; pima.edu/cfa
EXTRA: Additional images by the artists are on view at the Tucson International Airport, near the American Airlines arrival terminal, through Jan. 24.

A raft is crossing the sea in a storm.

The sky is angry and colorless, and so are the crashing waves. A stinging rain is falling. Some 20 souls shiver on the flimsy raft, leaning against each other to ward off the wet and the chill. The only colors to be seen are the flashes of red on their useless life jackets.

These refugees plunged into misery have fled their homelands in Africa or the Middle East, crossing the turbulent Mediterranean to escape wars and starvation. But they may very well lose their lives in the attempt.

This scene is captured in "No Place," a largescale oil painting by Paula Crawford that is a highlight of Take Nothing for Granted, a large group show at Pima College's Bernal Gallery that also features pieces by Kate Breakey, Danny Lyon, Jenny Day, Ernesto Esquiver, Ellen McMahon and others.

"One feels so helpless at the pain of others," Crawford said during a visit to the college last week. "Migrants pay high fees to cross the sea."

And many drown. More than 15,000 refugee deaths have been recorded in the Mediterranean since 2014, she said, "and it's getting worse."

The wrenching painting of hapless migrants at sea is an anomaly for Crawford, who has been an abstract painter most of her career.

A longtime professor at George Mason University outside Washington D.C., she's known for large, expressive paintings that have a relationship to the natural word. In her Skygraph series, she painted white dots on fields of black, suggesting stars and sky; another suite of paintings, of giant circles against pale gray, was inspired by a circular rainbow she glimpsed from an airplane window.

But many of her abstractions have been responses to tragedy. After surviving the 9/11 attack on DC in 2001, for example, she painted Chaos and Disorder, a set of large canvases with lines dashing and curling over backgrounds of black or red.

When Crawford suffered a serious brain injury a few years ago, she discovered that her ability to paint abstractly had abruptly disappeared. Her frontal lobe was damaged, and "it turns out that's where abstract painting comes from," she said.

During her illness and recovery, Crawford watched in horror TV and newspaper images of African and Middle Eastern refugees being pulled from the sea. She had already painted some works of red-wing blackbirds—"birds are the first migrants without borders," she said—and she felt compelled to paint the maligned people crossing the waters to Europe.

Her painting "No Place" doesn't confine itself just to the refugees in the Mediterranean, though. It's about any displaced people who have no place to be, as the title suggests. By UN estimates, 70 million people in the world right now have been forcibly moved from their homelands.

"There are many 'boats,'" Crawford said, speaking metaphorically, many ways for humans to suffer.

Around the corner in the Bernal Gallery, photographer Michael Hyatt exhibits four images that document our own migrant hellhole: the Arizona desert trails that have taken the lives of more than 3,000 crossers since 2001. A longtime volunteer with Humane Borders and No More Deaths, Hyatt has used his camera to record that prickly landscape, its desperate travelers and, poignantly, about the belongings they've left behind.

A little girl's polka-dot dress hangs from a prickly mesquite tree in the black-and-white photo "Mysterious Form Near a Migrant Camp – Arivaca, Arizona." We know nothing of the fate of the little girl who once wore this pretty dress, whether she died or survived this harrowing terrain.

The photo is from 2005, but the desert of 2019 still claims children. Last June, near Organ Pipe Cactus National Monument, a 6-year-old girl from India died in sizzling 108-degree heat.

Other photos are more recent, showing that the suffering hasn't stopped. A color image from 2011 pictures a pair of men's sneakers abandoned in the wilderness. Another, from 2016 memorializes a red cross planted by artist Alvaro Enciso on a site in Altar Valley where a migrant lost his life.

Hyatt has collected more than 100 of his images in the new book Along the Migrant Trail: A Borderlands Portrait. One of its most recent photos, from 2018, captures a hand-painted sign on a fence along Broadway in Tucson. Made in honor of Scott Warren, the No More Deaths volunteer now undergoing a federal trial for "harboring" migrants, the sign reads "Humanitarian Aid Is Never a Crime."

Across town, at the eastside

In a small show called Sed, The Trail of Thirst (sed is the Spanish word for thirst), Delilah Montoya, a photographic printmaker from New Mexico, shows eight stirring photo images that she took in 2004 in the desert outback of the Tohono O'odham Nation and Ironwood, northeast of tribal lands. At the time, 15 years ago, that region was among the most deadly for migrants. (The deaths have since shifted to the west desert, around Organ Pipe and in Cabeza Prieta National Wildlife Refuge, where activists have been arrested—and sentenced—for providing humanitarian aid.)

Like Hyatt, Montoya makes beautiful images of hard things. Her photos capture glorious landscapes lit by a desert sun, but their blue skies and puffy clouds are above grueling migrant trails. One pathway runs alongside a ditch and a power line, where water bottles and clothes have been left behind.

One of her best images is a brilliantly colored photo of a Humane Borders water station. Dark blue and purple clouds blow in from the mountains, threatening a storm. The desert below is bleak and unwelcoming, with sharp tree branches flying in the wind. But there's respite and hope here: three sturdy water barrels await the next thirsty migrants.