Cinema Tucson presents “Prayers for the Stolen.” In the past, if Spanish-speaking audiences in Tucson wanted to see Mexican-made movies on the big screen, they only had one opportunity: the Cine Mexico festival, held at the end of March each year since 2004. When it ended last year, it was the longest-running annual showcase of Mexican film in the United States. But former programmers Vicky Westover and Carlos Gutierrez insist that Cinema Tucson, their new monthly film series at the Fox Theatre, isn’t just a replacement for the festival, but a next step forward. For one thing, it gives Latin cinema in Tucson a permanent home—a place where those who enjoy Spanish-language film can go each month, rather than five days a year. And while Cine Mexico was dedicated to contemporary movies, Cinema Tucson focuses on both new and classic films, as well as seldom-seen cult flicks. The aim, according to Westover, is to show that Mexican cinema is not a monolith, and never has been. “People may have preconceived ideas of what Mexican cinema is,” she says, “but really, it’s tremendously diverse.” That point has already been made clear by Cinema Tucson’s first three months: In September, the series debuted with Polvo, a recent comedy about an aspiring actor turned accidental drug dealer, then followed in October with 1968’s The Batwoman, a gender-swapped, lucha libre-infused Batman spinoff presumably not recognized as DC Universe canon. This month’s movie is something different yet again: Prayers for the Stolen, documentarian Tatiana Huezo’s debut feature, a drama about young girls coming of age in a small mountain town where young girls frequently vanish. (It’s also Mexico’s official 2021 Oscar entry.) Expect the series to continue expanding its scope, perhaps even into movies from other Latin-American countries. “Carlos and I have the same philosophy,” she says. “We program for the community. We don’t program for ourselves.” 7 p.m. Thursday, Nov. 18. 17 W. Congress St.

The Loft Film Fest. After a year on pandemic-related hiatus, Tucson’s best film festival is back. In last week’s issue, we went over eight of our under-the-radar must-sees for the fest...but there’s a lot more where that came from. For a certain kind of cinephile, anything new from Argentine provocateur Gaspar Noe deserves an automatic circle on the calendar. Vortex, his latest, surprise-debuted at Cannes in June and remains shrouded in mystery. Its premise—a quasi-documentary following an elderly couple stricken with dementia—seems tame for a director whose previous work includes a first-person drug trip and a 3D sex film, but knowing Noe, there’s likely more going on than can fit in a one-line synopsis. The Polish-Italian co-production Silent Land is equally hard to parse: The remarkably tense trailer initially teases an infidelity drama, even dusting off the cliche of a beautiful young wife staring lustfully at a hot, shirtless pool boy, but the longer it goes on, it reveals a central conflict much worse than a cheating spouse, though exactly what isn’t entirely clear. Ahed’s Knee, from Israel’s Nadav Lapid, also falls into the “you just have to see it” category, but reviews describe a movie that seethes with anger against Lapid’s home government, while also featuring a dance sequence involving M16-wielding soldiers. But if all you’re looking for is to reconnect with the simple joys of cinema after a year of streaming from the recliner, nothing beats Buster Keaton falling off stuff. The free Sunday screening of the slapstick pioneer’s 1924 classic Sherlock Jr. will be accompanied by a live score from a group of local chamber musicians—the sort of unreproducible event that should make anyone grateful that moviegoing has moved from the sofa back to the theater. Silent Land: 8 p.m. Friday, Nov. 12 (open air screening). Ahed’s Knee: 4:45 p.m. Saturday, Nov. 13. Sherlock Jr.: 7:30 p.m. Sunday, Nov. 14. Vortex: 7:30 p.m. Tuesday, Nov. 16. 3233 E. Speedway Blvd.

Clint Eastwood Career Celebration. Do you feel lucky, punk? Well, you should if you’re a Clint Eastwood fan, because Harkins Theatre is spending the month honoring the 91-year-old icon’s somehow still-growing filmography. This week features a double-shot of ’90s Eastwood that proves his career hasn’t been all guns, ponchos and gravelly-voiced threats, just most of it: the dad-movie classic Unforgiven, in which he plays a cranky Old West outlaw coaxed into one last job; and your grandmother’s favorite, The Bridges of Madison County, in which he plays a cranky old photographer romancing Meryl Streep. See: range! Unforgiven: 2 p.m. Friday, Sunday, Tuesday and Thursday, Nov. 12, 14, 16, 18. The Bridges of Madison County: 2 p.m. Saturday, Monday and Wednesday, Nov. 13, 15, 17. 5455 S. Calle Santa Cruz.

Gremlins. Halloween is over, but this much-loved Christmas-themed creature feature makes for an ideal transition point between spooky season and the Mariah Carey months. Somehow, it’s one of the only mega-popular ’80s franchises that hasn’t yet had the fun rebooted out of it, but it’s only a matter of time before someone decides to, like, make all the gremlins trans or something, causing a bunch of 40-year-old dudes with extensive figurine collections to go on Twitter and declare their childhoods “ruined,” so enjoy the original now before it becomes completely exhausting to revisit! Screening as part of Harkins Theatre’s Tuesday Night Classics series. 7 p.m. Tuesday, Nov. 16. 5455 S. Calle Santa Cruz.

WHAT TO RENT FROM CASA VIDEO: The Last Waltz (1978). Actually, there’s at least one other Thanksgiving-related movie worth watching on Thanksgiving: Martin Scorsese’s documentary capturing the final concert by roots-rock greats the Band. Filmed on Nov. 25, 1976, at San Francisco’s Winterland Ballroom, it plays out like an extended family gathering, with guests flying in from all over the country. Hey, everyone, Uncle Neil Young’s here! And, uh, what’s that all over his nose? Suggested beer pairing: Greenwood Brewing’s Harvest Diem Spiced Beer. 2905 E Speedway Blvd. 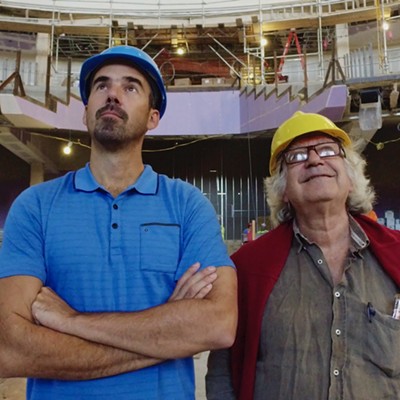