Moving Panels: Comic to Screen. The University of Arizona's Hanson Film Institute is coming to the TENWEST Festival! This free panel gathers industry insiders and professionals to discuss the relationship between comic books and the film screen. We all know we're currently in the midst of THE comic book-movie era, but how much do you know about what goes on behind the scenes? This event's panelists include comic book writer Steven Grant (2 Guns, The Punisher), film and television producer Matt Skiena (The LEGO Movie), producer Erik Olsen (The Dirt, The Book of Eli) and film and television producer and comic book creator Shane Riches (The Fog). 3 to 4 p.m. Friday, Oct. 18. At the UA Center for Creative Photography, 1030 N. Olive Road. Free.
click to enlarge

Frankenweenie. It's October, that means it's officially Tim Burton season, right? To celebrate the occasion, The Loft Cinema is hosting their latest Loft Jr. event outdoor on "Hippie Hill" at Himmel Park. Frankenweenie is the sequel/reimagining to some of Burton's earliest short films. Picking up (in a sense) where his 1982 film Vincent left off, Frankenweenie follows a young mad scientist who uses his lab to bring his deceased pup back to life. 6 to 7:45 p.m. Friday, Oct. 18. 1000 N. Tucson Blvd. Please bring your own seating. Free. 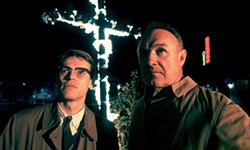 Mississippi Burning. In 1964, three civil rights workers in Mississippi disappeared. This tense, Oscar-winning drama follows the story and the locals' attempt to pick up the threads. Gene Hackman and Willem Dafoe co-star in a battle in the very middle of the Civil Rights struggle. Part of The Loft's "Journalism on Screen" series, the screening includes an onstage discussion with the film's Golden Globe-nominated screenwriter, Chris Gerolmo, and is moderated by Tucson-based screenwriter Will Conroy. Presented by The New York Times, The Arizona Daily Star, The Daily Wildcat/UA TV-3, The UA College of Social and Behavioral Sciences, and the UA School of Journalism. 2 to 4:45 p.m. Saturday, Oct. 19. 3233 E. Speedway Blvd. $8.

Home Movie Day. This event asks "what cinematic treasures lurk in the attics and garages of Tucson?" While it might not be As I Was Moving Ahead Occasionally I Saw Brief Glimpses of Beauty, this is a celebration of local home movies. The Loft Cinema is hosting the eighth annual Home Movie Day, and includes expert inspection, preservation advice and screenings of local home movies. Attendees are invited to submit their home movies for inspection and screening consideration in 16mm, 8mm or Super 8 film formats only. No digital or VHS movies. 11 a.m. Saturday, Oct. 19. 3233 E. Speedway Blvd. Free.

Suicide: The Ripple Effect. This documentary explores the lasting effects of suicide focusing on "breaking stigma, advocacy, and mental wellness." Directed by Kevin Hines, who himself is a suicide attempt survivor, this movie not only looks at the epidemic of suicide, but shares stories of strength and survival. A Q&A discussion will follow the screening. 7 to 9 p.m. Tuesday, Oct. 22. At Tucson Village Farm, 4210 N. Campbell Ave. Tickets available at the door for a suggested donation of $10 per person. The proceeds from this event will be used to support the Tucson Village Farm camp scholarship fund.

Punk the Capital: Building a Sound Movement. What better place to form a unique and dedicated punk scene than the nexus of all politics in the United States? The Screening Room is hosting a documentary about the formation of punk in DC from 1976 to 1983. Punk the Capital includes "a recently unearthed trove of Super-8 film" and features bands such as Bad Brains and Minor Threat. 7:30 to 10:30 p.m. Wednesday, Oct. 23. 127 E. Congress St.

Hocus Pocus Halloween Party. What do Bette Midler, Sarah Jessica Parker and Kathy Najimy have in common, other than being 300-year-old witches returned from the dead? They all star in the Halloween classic Hocus Pocus! The Loft is hosting a spooktacular party with prizes, props and goodie bags, and everyone's invited. Part of the Loft Jr. series, this is cheesy, funny and just the slightest bit scary. 7 to 9 p.m. Wednesday, Oct. 23. 3233 E. Speedway Blvd. $12.