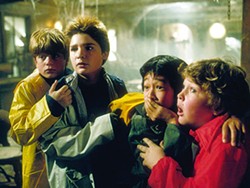 The Goonies (Free). In celebration of the totally real holiday of International Talk Like a Pirate Day, The Loft Cinema is screening this '80s adventure for free at Himmel Park. Featuring Sean Astin, Corey Feldman and Ke Huy Quan, it's about as classic as a PG movie can get. So instead of retelling you the plot for the 100th time, did you know Quan spells out all his cusses because his mother made him promise not to use any bad language in the movie? Part of the Loft Jr. series. 6:30 to 8:35 p.m. Friday, Sept. 20. 1000 N. Tucson Blvd.

The Simpsons binge watch (Free). University of Arizona's Cats After Dark group is hosting a screening on the UA mall in celebration of the 30th anniversary of the longest-running sitcom in TV history. This free public event includes two hours of Simpsons episodes. Here's your chance to watch some good ol' Simpsons episodes from before they became zombified. Fun! 7 to 9 p.m. Saturday, Sept. 21. 1303 E. University Blvd. Free. Please bring your own seating.

Voices of Vail. This locally made documentary examines a century of change in the Southern Arizona's "Town Between the Tracks," Vail. It is a celebration of the "people, history, and remarkable natural beauty that make Vail special." In addition, the film includes an original overture, written by Tucson Symphony Young Composer, Claire Thai. This screening at the Loft Cinema is hosted by the Vail Preservation Society. 1:30 to 3:30 p.m. Sunday, Sept. 22. 3233 E. Speedway Blvd. $15.

Moonlight Sonata: Deafness in Three Movements. This brand-new documentary by Oscar-nominated director Irene Taylor Brodsky is a personal memoir about her son growing up with hearing loss, his deaf grandfather growing old and Ludwig van Beethoven composing his music while going deaf. This Loft Cinema screening is hosted by the Arizona Commission for the Deaf and Hard of Hearing and DIRECT Center for Independence. The film will be screened with captions and audio description is available. 7:30 to 9:10 p.m. Tuesday, Sept. 24. 3233 E. Speedway Blvd. $10.

Day for Night: The Art of Films on Art. The UA School of Theatre, Film & Television and Museum of Contemporary Art Tucson invite you to peek behind the curtain of filmmaking. Editor and producer of LACMA Productions at the Los Angeles County Museum of Art Erin Wright and UA Film & Television professor Lisanne Skyler will discuss the making of the short film A Few Things About Robert Irwin. This screening and talk focuses on "innovative approaches to making entertaining, enlightening and emotionally compelling films about art and artists." What's better than art? Art about art, of course! 6 to 8 p.m. Tuesday, Sept. 24. 265 S. Church Ave. $10. Free for MOCA Members & UA Theatre, Film & Television students.

Anthropocene: The Human Epic. The planet is changing, and humans are impacting that change greatly. This is only the jumping-off point for this new documentary coinciding with the U.N. Climate Action Summit. Anthropocene is described as a "cinematic meditation on humanity's massive reengineering of the planet." This screening at The Loft Cinema is part of their Science On Screen series, and features a post-film Q&A with New York Times science writer Jim Robbins, scientists from the University of Arizona's Tree Ring Lab and moderator Susan Swanberg of the UA School of Journalism. 7:30 p.m. Wednesday, Sept. 25. 3233 E. Speedway Blvd. $10.

This Is Spinal Tap. For their Tuesday Nights Classics series, Harkins Theaters is showing the most beloved documentary about a fake band ever made. This Is Spinal Tap was such a hit, it resulted in the fake band making real music and after the film finished, multiple people told director Rob Reiner that he should have chosen a more well-known band to film. 7 p.m. Tuesday, Sept. 24. 5455 S. Calle Santa Cruz & 5755 W. Arizona Pavilions Drive.