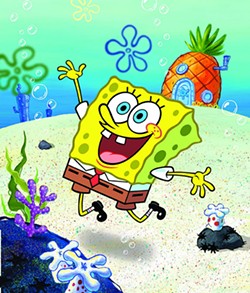 Courtesy photo
Spongebob Squarepants
The SpongeBob SquarePants Movie (Free!). Celebrate the 20th anniversary of SpongeBob's premiere with this free, outdoor screening on "Hippie Hill" at Himmel Park, courtesy of the Loft Cinema. Featuring all the show's recurring members: Spongebob, Patrick, Mr. Krabs, and a live-action David Hasselhoff in all his bronze-skinned glory. Don't miss your chance to see this movie, which was called "Surreally goofy and entertaining for both children and their parents" on the big screen. 7:30 p.m. Friday, Aug. 16. 1000 N. Tucson Blvd. Free. Please bring your own seating.

Tucson Salvage Screening & Reading. The Dusenberry-River Library is hosting a screening of the award-winning documentary based on the Weekly's recurring column Tucson Salvage, written by Brian Smith. The screening also features a live reading of the column by Smith. The documentary, directed by Maggie Smith, features interviews with multiple figures living on the periphery of Tucson, sharing their personal struggles and stories. 3 to 4 p.m. Saturday, Aug. 17. 5605 E. River Road. Free.

Avengers: Endgame. Casa Video is screening the film which recently snagged the title of highest-grossing film of all time! Even more interesting, the second highest-grossing film, Avatar, features actress Zoe Saldana as a blue alien, while Endgame features Saldana as a green alien. What does this mean? People like cool aliens of course, and here's your chance to see even more! It's the climactic ending to this series of the Marvel Universe; the culmination of 22 movies. 7 to 10 p.m. Saturday, Aug. 17. 2905 E. Speedway Blvd. Free.

Apocalypse Now Final Cut. The horror, the horror of not seeing Coppola's wartime masterpiece, unabridged, on the big screen. This Vietnam-era retelling of Joseph Conrad's The Heart of Darkness is a haunting psychological journey through humid jungles and battle-scarred minds. This expanded edition makes the whole experience grander, and rawer. The Screening Room is showing this all week long! Starting at 7:30 to 10:30 p.m. Monday, Aug. 19. At various times through Sunday, Aug. 25. 127 E. Congress Street.

Almost Famous. The Loft Cinema is celebrating Tucson's birthday (Aug. 20, 1775) with a special screening of the Oscar-winning Almost Famous, which was partially filmed here in Tucson. This semi-autobiographical movie tells of a young, aspiring journalist touring with rock bands in order to land a Rolling Stone cover story. It also features a fascinating cast and crew of real-life musicians and actors all mixed together, including Mark Kozelek, Rainn Wilson, Zooey Deschanel, Peter Frampton, Jason Lee and more. 7:30 to 9:45 p.m. Tuesday, Aug. 20. 3233 E. Speedway Blvd. $10.

Network (Free!). This radical, satirical call to arms for modern life stopped being something to laugh at long ago. It now acts as a grim prediction for the society of spectacle we find ourselves in. It tells of a struggling television network that "exploits a deranged former anchor's ravings and revelations about the news media for its own profit." Peter Finch was the first person to win a posthumous Oscar for Best Actor for his role as the crazed seer on screen. 7:30 to 10 p.m. Wednesday, Aug. 21. 3233 E. Speedway Blvd. Free.  ■