Loft Kids Fest. Children rejoice! The Loft Cinema is showing a bunch of great kids movies. Parents rejoice! Admission is free. Films range from cartoons to computer animation to anime to live action, but it all begins with a kick-off party at Himmel Park. The party includes a screening of Looney Tunes with free festivities, live music and games. The party starts at 6 p.m. Friday, July 19. Movie begins at 8 p.m. 1000 N. Tucson Blvd. Free. The rest of the Loft Kids Fest starts at 10 a.m. every day from Saturday, July 20 to Sunday, July 28, all at the Loft Cinema, all free. Castle in the Sky on Saturday, July 20. Shrek on Sunday, July 21. Okko's Inn on Monday, July 22. The Secret Garden (1993) on Tuesday, July 23. Disneynature's Born in China on Wednesday, July 24. Charlotte's Web (2006) on Thursday, July 25. Kung Fu Panda on Friday, July 26. Willy Wonka and The Chocolate Factory on Saturday, July 27. The Grinch (2018) on Sunday, July 28. 3233 East Speedway Boulevard. Free. 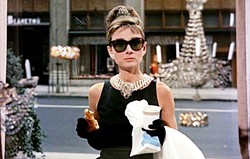 Breakfast at Tiffany's. The Fox Theatre is screening one of Audrey Hepburn's most iconic roles. Based on Truman Capote's 1958 novel of the same name, this story examines the lives of New York socialites, with enough comedy and romance thrown in to keep it interesting. The screening is hosted by the Andra Heart Foundation, a local charity dedicated to educating the community on heart health. $25, or $75 for VIP which includes access to a pre-screening party at 5:30pm with cocktails, appetizers 50/50 Raffle and more! Proceeds for the party and tickets to the movie benefit the Andra Heart Foundation. 7:30 p.m. Saturday, July 20. 17 W. Congress Street.

For All Mankind. The Loft Cinema is celebrating the 50th anniversary of the Apollo 11 Moon Landing with a special screening of this documentary, which takes an in-depth look at NASA's missions to the moon. The event features an introduction by William Boynton, UA professor of astrobiology research. Sponsored by the Flandrau Science Center & Planetarium. 2 to 4 p.m. Saturday, July 20. 3233 E. Speedway Blvd. $7.

8 Mile. Ah, the movie that proved to a good amount of Americans that Eminem was more than just the next Vanilla Ice. For their Tuesday Night Classics, Harkins Theatres is screening drama based on Eminem's upbringing and entry into the rap game. It also won an Academy Award for Best Original Song, because "Lose Yourself" is absolutely timeless. 7 p.m. Tuesday, July 23. 5455 S. Calle Santa Cruz & 5755 W. Arizona Pavilions Drive.

Apollo 11. Sky Bar is also celebrating the moon landing's 50th, but with a bit more of a dramatic flair. See Tom Hanks, Bill Paxton and Kevin Bacon battle the cold heart of space on their trip to the moon. As it turns out, getting out there is easy, getting back home is complicated. 6 to 8 p.m. Sunday, July 21. 536 N. Fourth Ave. All ages, guest under 21 must have legal guardian present. No cover. Free popcorn and drink specials.

The River and the Wall. This documentary takes viewers on a 1,200-mile trip from El Paso to the Gulf of Mexico to examine the wilderness threatened by a potential border wall. The trek is accomplished on horses, mountain bikes and even canoes. The screening at The Loft Cinema is presented in conjunction with the Colibri Center for Human Rights. 7:30 to 9:45 p.m. Wednesday, July 24. 3233 E. Speedway Blvd. $10. ■