Naila and the Uprising. The UA School of Middle Eastern and North African Studies, and Center for Middle Eastern Studies present this free screening about a woman in Gaza who must make a choice between love and freedom. While set in the 1980s, this film's themes echo on today. The film is followed by a discussion with Dr. Maha Nassar. Also hosted by the Arizona Palestine Solidarity Alliance and Jewish Voice for Peace. 6 to 8 p.m. Friday, March 29. 1130 N. Mountain Ave. Free and open to all.

Clueless. If you're looking for a nice helping of pure, condensed '90s, the Loft Cinema has you covered with back-to-back weekend screenings of this high school drama classic. It's satirical, it's funny, it's...an adaptation of a novel published in 1815? Thinking of skipping this screening? As if! 10 to 11:45 p.m. Friday, March 29 and Saturday, March 30. 3233 E. Speedway Blvd. $8.

Tesoros (Treasures). As the Tucson Cine Mexico closes out, there are still some chances to see screenings this week. One such film is Tesoros, about young siblings from a small fishing village on the Pacific Coast of Mexico who embark on a search for lost pirate treasures. 2 to 3:30 p.m. Sunday, March 31. Harkins Tucson Spectrum 18. Free. For a full list of Tucson Cine Mexico screenings, visit tucsoncinemexico.org.

Fast Times at Ridgemont High. Behold, Sean Penn's greatest achievement! It is not his two Oscars, it's that time he played a high school stoner when he was 22 years old. This brash and bawdy film is the epitome of sex, drugs and rock 'n' roll. Harkins Tuesday Night Classics invites you in on the vibes. 5455 S. Calle Santa Cruz. 7 p.m., Tuesday, April 2. 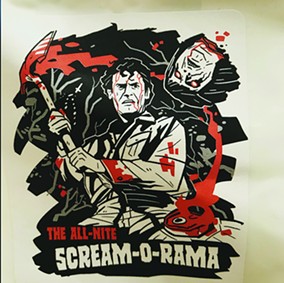 All Nite Scream-O-Rama! The Loft Cinema is making sure you don't get any sleep, with 12 straight hours of classic horror flicks. Some of the films are cheesy, some are great, some are downright weird. Feel free to bring your pillows and pajamas for this "cinematic slumber party massacre." Films include: The Blob, Psycho, Candyman, The Howling and more. 7 p.m. to 7 a.m. Saturday, March 30 to Sunday, March 31. 3233 E. Speedway Blvd. $17.

Best Wishes For Worst Times. Presented by the University of Arizona Museum of Art, this screening takes the audience on a fictional art tour. Led by fictional art critic Maria Denolt, this film introduces viewers to six artworks which demonstrate principles central to art history (and time travel). Since 2012, Tucson-based artist and archivist Dani Lamorte has performed as Maria Denolt, an "an art critic, lecturer, lofty person who engages contemporary art as an open-ended adventure into the absurd." 3 to 4 p.m. Thursday, April 4. 1031 N. Olive Road. $8.