The Lion in Winter It's Christmas Eve 1183, and King Henry II will soon announce the successor to his throne. Only, things don't go exactly as planned. Part historical drama, part Christmas film, this '60s classic is perfect for the season, regardless of whether or not you're a history snob. A discussion of the film will follow the screening. 6:30 to 9 p.m. Friday, Dec. 14. Grace St. Paul's Episcopal Church. 2331 E. Adams St.

Rudolph the Red Nosed Reindeer & Frosty the Snowman. Here's your chance to see a double-feature of two animated holiday favorites. Bookmans Entertainment Exchange is hosting a family movie and craft night. This hyper-injection of holiday glee is certain to get you in the spirit. After the screenings, you get to make your very own reindeer ornaments, presented by the nonprofit Tucson 4 Teachers of Tucson. 6 to 8 p.m. Friday, Dec. 14. 3733 W. Ina Road. 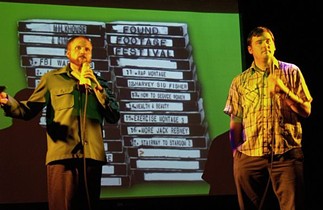 The Found Footage Festival. Joe Pickett and Nick Prueher, also known as the Found Footage guys, are bringing their favorite and craziest VHS finds to the Loft Cinema for all to gawk, laugh and become befuddled at. This event is divided into two screenings: "Cherished Gems," which shows VHS favorites, and "After Dark," which shows the trashiest, dirtiest and most depraved videos from the annals of the Found Footage Guys. This is essentially a Pandora's Box of forgotten thrift-store relics. Cherished Gems: 10 to 11:30 p.m. Friday, Dec. 14. After Dark: 10 to 11:30 p.m. Saturday, Dec. 15. 3233 E. Speedway Blvd. $14.

Whale Rider. In a sense, this is the superior and arguably more art-house version of Free Willy (minus the Michael Jackson soundtrack). This 2002 movie tells of a young Maori girl who "fights to fulfill a destiny her grandfather refuses to recognize." The lead actress, Keisha Castle-Hughes, received an Oscar-nomination for her role at only 12 years old. 7:30 to 9:15 p.m. Tuesday, Dec. 18. 3233 E. Speedway Blvd. Free.

Children of Men. Who doesn't love a dystopian sci-fi flick that is slowly becoming our reality every day? Adapted from a 1992 P.D. James novel of the same name, Alfonso Cuarón's haunting and poignant thriller examines a future world destabilized by lack of human reproduction, and the philosophical questions it asks. But besides any of that, you get to see one of Michael Caine's best performances and some of the best cinematography of the decade. 7:30 to 9:45 p.m. Wednesday, Dec. 19. 3233 E. Speedway Blvd. Regular admission prices.

The Star Wars Holiday Special. The Loft Cinema is celebrating the 40th anniversary of possibly the most infamous holiday special of all time. So awful it has never been rebroadcast. So mind-bending it's never been officially released on home video. So divisive George Lucas vowed to smash any copy he found. All that being said, the Loft Cinema wouldn't, in good conscience, charge you to watch this, so it's a free screening! Fun for Star Wars lovers and haters alike! 7:30 to 9:30 p.m. Thursday, Dec. 20. 3233 E. Speedway Blvd. Free.