Earthrise. The Pima Air and Space Museum invites you in from the hot summer evenings to enjoy the chilly void of space. The recurring Night Wings event involves screenings of the historic astronomical films, such as Earthrise, the first time humanity ever saw their own planet floating in space. 5 to 9 p.m. Saturday, July 28. 6000 E. Valencia Road. $10. Kids 12 and under free.

Dawnland. The Sea of Glass Center for the Arts is screening a documentary on Native American children and their systematic treatment. As recently as the 1970s, one in four Native children nationwide were living in non-Native foster care, adoptive homes, or boarding schools, essentially erasing their cultural identities and stripping them from their families. Now, for the first time, they are being asked to share their stories. 7:30 to 9:30 p.m. Saturday, July 28. 330 E. Seventh St. $10.

Bar Cinema: Theater Galactica. Every fourth Sunday, Sky Bar hosts a "voyage through the universe of science fiction and science fact." The evening begins with a discussion of NASA's Parker Solar Probe, scheduled to launch next month and sample the Sun's corona. Then a screening of 2007's Sunshine, a sci-fi film in which Cillian Murphy and Co. hop on a spacecraft in hopes of reigniting their dying sun. Then, a post-film showing of an episode of Star Trek. It's a three-way science romp! 7 to 10 p.m. Sunday, July 29. 536 N. Fourth Ave.

Wes Anderson Trivia and Costume Party. Dear reader, please disregard the following palaver and rigmarole if you are not of the cultivated mold. Casa Video humbly petitions your appearance for a most festive gala lauding the preeminent auteur of our time, one Wes Anderson. The trivia comprises factoids from Anderson's first eight films (Bottle Rocket to Grand Budapest), and you are of course obliged to adorn yourself with any befitting cravat, periwig, or tunic. Properly ornamented personages receive a dollar off their aperitifs. And they'll also be celebrating the release of Isle of Dogs on DVD/Blu-Ray. 7 to 9 p.m. Tuesday, July 31. 2905 E. Speedway Blvd.

Rivers and Tides. The critically-acclaimed documentary is a vision of the natural world molded by currents, driftwood, ice and mud, all modified with human hands. Andy Goldsworthy's art forms sculptures from the natural world and inherently degrade and return to the soil. Hosted by the Loft Cinema, in partnership with Sky Island Alliance and UA Water Resources Research Center. Also featuring a panel discussion from the aforementioned groups. 7:30 to 9:30 p.m. Tuesday, July 31. 3233 E. Speedway Blvd. Regular admission prices. 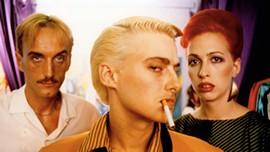 Liquid Sky. Invisible aliens in a flying saucer come to Earth looking for heroin. That's just the set-up for the zany '80s cult hit. With neon-lights, crazy costumes and an event crazier plot, this forgotten gem is just as much a feast for the mind as it is for the eyes. The Loft Cinema recently got their hands on a better-than-ever digital restoration, and you are invited to the freakshow. 7:30 to 9:15 p.m. Wednesday, August 1. 3233 E Speedway Blvd. Regular admission prices.