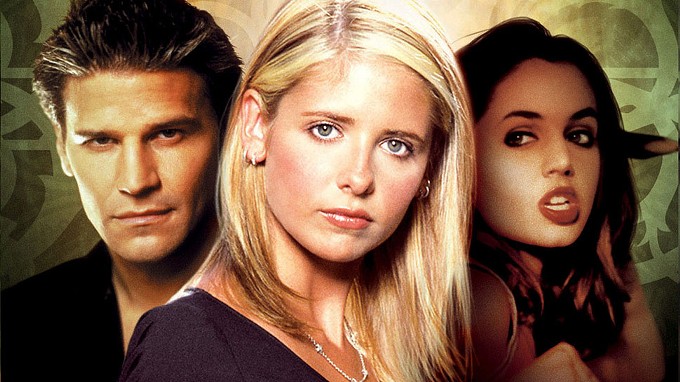 Tucker and Dale Versus Evil. Tucson Yoga Studio is bringing back Cinema Nirvana, where they offer "a view and perspective on film seen with the 'dharma eye.'" For their return, and in celebration of Friday the 13th, they're showing one of the most hilarious, bloody and witty horror films of the past decade. T&DvE flips the horror genre around by putting the "scary guys in the woods" as the good guys, and the dumb college kids as the, well, they're still the dumb college kids. 7 p.m. Friday, April 13. 150 S. Fourth Ave. Free (donation suggested).

Buffy the Vampire Slayer Marathon. For actress Sarah Michelle Gellar's birthday, Casa Video is putting on a marathon of one of the most beloved and campy TV shows out there. Get your late '90s nostalgia on for a time back when "vampire" meant Anne Rice, not whatever it means now. Plus, there will be food by the Nhu Lan Vietnamese food truck. 7 p.m. Saturday, April 14. 2905 E. Speedway Blvd.

Brillo Box (3 ¢ off). Andy Warhol made a lot of people feel a lot of different ways: inspired, confused, peeved. But to some, he made them feel nostalgic. Filmmaker Lisanne Skyler grew up in a house with one of Warhol's works, a simple pastiche Brillo Box. You know... art. This documentary tells the tale of that art piece that blurred the lines between advertising and art, commonplace and creative, and all the while also tracking the journey of her family's own Brillo Box. With a talk by Lisanne Skyler after the show. 6-7 p.m. Tuesday, April 17. MOCA Tucson, 265 S. Church Ave. $10.

Keep the Change. The Tucson Jewish Community Center is screening the winner of the Tribeca Film Festival. It's a rom-com about two people who meet in a support group that is equal parts clever and meaningful. With a special performance by Sparks cheerleaders. 7-9:30 p.m. Thursday, April 19. 3800 E. River Road. $5 (Tickets available at the door, by phone or online.)

Best F(r)iends & The Disaster Artist. Two follow-up films to one of the greatest "terrible-old-movies-so-bad-people-have-so-much-fun-laughing-at-it-that-it-becomes-relevant-again" movies of all time: The Room. Best F(r)iends is a return to work by the two stars of The Room, Greg Sestero and Tommy Wiseau, and The Disaster Artist is the recent Golden Globe-winning account of the creation of The Room. All-around a great night to see a lot of stuff related to, but not actually watch, The Room. Which is of course what you want to do. And did I mention that the star of the show, Greg Sestero, will be there in person? 7-10:30 p.m., Saturday, April 14. 3233 E Speedway Blvd. $15.

Throne of Blood. If you haven't seen an Akira Kurosawa film by now, just hand over your "Cinema Snob" sash. Or, better yet, watch this classic Ido-period Samurai film in all its 35-mm glory and become a snob yourself. Whether you want war, tragedy or sheer sword-fighting badassery, Throne of Blood has it. 7:30-9:15 p.m., Wednesday, April 18. 3233 E. Speedway Blvd. $9.75.