Danny Zuko once uttered some wise words as he introduced the fastest, coolest car in the world up to that point, Greased Lighting. "Well, this car could be systematic! Hydromatic! Ultramatic! Why, it could be Greased Lightning!"

And I say to you dear readers: Well, this week could be deeply thematic! Comedic/dramatic! Cinematic! Why it could be Reel Indie! This week brings us several showings at the university, some Disney nostalgia and the next step in the Southern Arizona Transportation Museum's Shrek screenings.

The Loft is foregoing its weekly event series like Mondo Monday and Cult Classic to make way for The Loft Film Fest, which we covered in last week's cover story. But, because there are a seemingly infinite number of films showing at the fest, we can mention a few more this week, still without hitting them all.

Get your keesters to these theaters!

qShrekfest! It's the moment we've all been waiting for since mid-October, when Tucson's Historic Downtown Depot showed the first Shrek. Well get ready for twice the onions and belching, and a surprisingly massive number of pop culture references, because Shrek 2 is showing at 5:30 p.m. on Nov. 11 at the Historic Depot (414 N. Toole Ave.). Enjoy choo choo rides starting one hour before the screening, as well as popcorn and soda available for purchase. Then settle in for the voice talents of Joan Rivers, Julie Andrews and Antonio Banderas and some great new characters, including a coachman named Raul and a guy who doesn't even have dental.

Silverado. See this tribute to the great westerns of the mid 20th century in a film that warns you go "get ready for the ride of your life" at 7 p.m. on Tuesday, Nov. 14.  This story follows a cast of characters including Kevin Kline, Kevin Costner, Linda Hunt and Jeff Goldblum through a series of classic Old West adventures on their way to Silverado, with plenty of bandits, prison stays and killin's along the way. Lawrence Kasdan, who co-wrote Raiders of the Lost Ark, The Empire Strikes Back and Return of the Jedi, served as writer, producer and director for this film.

The Camouflage Closet. This short documentary shares the experiences of LGBT veterans navigating the "don't ask, don't tell," world of the military, and explores the current ban on transgender military service as well. The film was created as a community based art project in order to increase awareness of the experiences of these veterans. Noon to 1 p.m. Tuesday, Nov. 14. Office of Diversity and Inclusion--UA Health Sciences, 1501 N. Campbell Ave. Free. (Popcorn and candy is free too!)

The Hitman's Bodyguard. This movie has everything you want in an action comedy: an evil dictator whose name starts with "Vl," a bunch of interpol agents, prison breaks, at least one dramatic encounter on top of a high building and (bonus round!) Ryan Reynolds and Samuel L. Jackson. Reynolds plays the bodyguard, whose career took a dive a few years ago and so finds himself reluctantly acting as a bodyguard for Jackson, an incarcerated hitman on his way to testify at an important trial. The 8 p.m. screening on Friday, Nov. 10 is free for CatCard holders and just three bucks for everyone else. At the Gallagher Theatre, 1303 E. University Blvd.

Disney Night at the Film Bar. Ready for some classic Disney films? Raise a glass of craft beer to Mickey and the gang at this nostalgia and Chinese food-fueled night, where John Lee of Jane's Rolling Wok food truck will be serving up irresistible Chinese dishes. There's nothing quite like watching an old Disney film to work up an appetite, after all, and you'll need something to fuel all the dreams that Mickey will inspire you to pursue.

My Neighbor Totoro. What's more enchanting than a Miyazaki film? Each of the Japanese director/producer/screenwriter/animator/wizard's films are imbued with a quality that makes you want to explore the nearest forest, give your mom a hug and relive your childhood all at once. This cult film follows two sisters and their encounters with soot sprites, cat buses and Totoro, an enormous, cuddly and somewhat bunny-like creature who acts as keeper of the forest. This free outdoor screening at 6:30 p.m. on Friday, Nov. 10 will let you take in Miyazaki's message about the importance of connecting in nature while you're at Himmel Park (1000 N. Tucson Blvd.) yourself.

Funeral Parade of Roses. If you want to talk about progressive and experimental film, we've got to talk about this 1969 Japanese film, which only recently became a valuable in the United States. Director Toshio Matsumoto tears down the fourth wall, pulls open the curtain of stigma surrounding sexuality, stretches the viewer's imagination with surreal imagery and incorporates cartoon speech balloons into this black-and-white, live action film. The film, showing at 9:45 p.m. on Thursday, Nov. 9 and 7:30 p.m. on Thursday, Nov. 16, follows Eddie, a transgender woman working as a hostess at a bar finds herself caught up in love triangle with a drag queen and the club owner. Kubrick cites the film as major influence on A Clockwork Orange. In Japanese with English subtitles.

uLet Yourself Go. When a psychoanalyst who needs to lose some weight starts working with a personal trainer in great physical shape who needs to get the rest of her life together, what we end up with is a sort of wit vs. fit. But over the course of a hilarious romp through Rome, the two learn that they can each help the other find balance between mind, body and soul. This film won the 2017 Italian Golden Globe for Best Comedy, and is showing at 2 p.m. on Thursday, Nov. 9 and 5:15 p.m. on Wednesday, Nov. 15. The Tucson Jewish Community Center is partnering with The Loft to present the film.

The Cakemaker. When Oren, a married businessman, falls in love with Thomas, a young baker in Germany whom he encounters in his travels, he promises Thomas his wife will never find out. But when Oren dies, Thomas travels to Israel to seek answers, and, using a fake identity, begins working for Oren's widow at her café in Jerusalem. It's a story about loss, love and secrets which is told with careful sweetness in writer/director Ofir Raul Graizer's debut. It shows at 4:45 p.m. on Thursday, Nov. 9 and 11:30 a.m. on Sunday, Nov. 12. 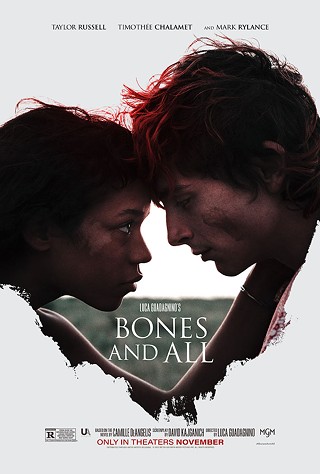