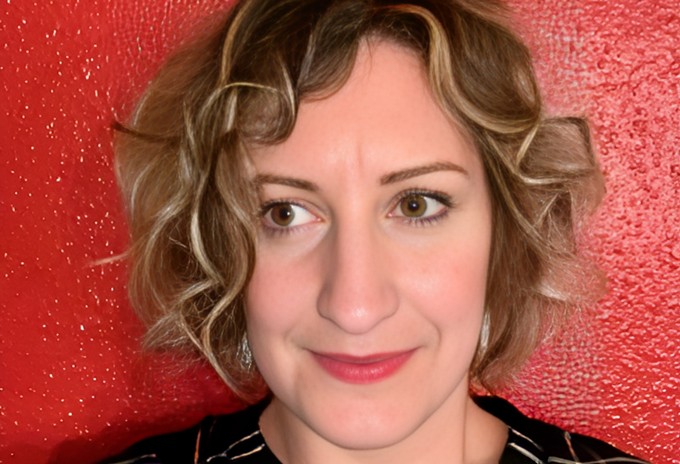 Rebecca Fox, with her husband, Paul Fox, hosts another in her fourth-Tuesday comedy show series, “Blazed and Amused,” on Tuesday, July 28, at 420-friendly Arte Bella.

The series is the latest waystation in Rebecca’s comedy journey. You could say she’s been to the mountain, looked around, and decided, for now, to settle in the foothills.

She might have abandoned her quest when Oxygen canceled Chelsea Handler’s series, “Girls Behaving Badly.” Handler had personally chosen Rebecca out of a cattle call audition for the show.

After featuring in two episodes, Rebecca packed up her whole life in New York City and moved it to LA. The Handler show made her feel like she’d finally arrived. But another two episodes later, it was over.

Rebecca already had drifted away from the NYC comedy scene when friends tipped her off to the Handler audition. She’d had an existential crisis common to almost every comic: “Where can I go from here?” she thought.” The laughs are heady, but is this all there is?” The Handler spot had given her hope again.

Rebecca had arrived in NYC with an acting degree from Emerson University. She had always been funny, she said, but she thought acting had made her too serious. So, she took improv classes. “Letting go of control was really hard for me,” she said, “but here were funny people around and I wanted to be funny.”

While studying at Upright Citizens Brigade, she joined a popular, all-female ensemble called Ms. Jackson. “Lucy Gosen was in it,” Rebecca said. “She’s Becky on Roseanne.” Fatefully, she also took a standup class. “When I did my first show, it fit like a glove,” she said. “This is it! I was better at standup than I’d been at anything else I’d ever done.” She started doing booked shows almost immediately.

“One of the greatest periods of my life was after I did an open mic at The Duplex Piano Bar (in NYC). Poppi Kramer was the bartender and she hosted from the bar.” A comedian and actor, Kramer was in the inner circle of NYC’s comedy scene. She is best known, though, as the winner of “The Biggest Loser,” season three’s at-home competition. She lost half her body weight.

Kramer started including Rebecca in her own circle of friends. “We did tons of shows and we always worked together,” Rebecca said. “Being part of a group really worked for me.”

“I’d gotten pretty good,” Rebecca said, “but I got to a point where I just wasn’t sure how to go further.”

Now, the Handler opportunity that had given her dreams a second life, now left her in malaise. Rebecca reached out to her NYC posse to commiserate. Then came another break. Kramer was able to connect her to a job L.A.’s legendary Comedy Store.

The next four years were a comedy immersion experience.

“You meet a ton of people, and you watch a ton of shows and we all talked comedy all the time,” Rebecca said. “The ideology of the place is you have to go internal to really get to the truth and accept yourself onstage. Then from there, you can make jokes.”

She loved it, but reality eventually struck again. “I realized that if I do this, I will have nothing else. I’m good at this. I had the respect of my peers and I would get booked on shows, but then what?

“At the time, there was zero chance that you could get married, have a baby and still be at The Comedy Store every night slugging it out, competing for your spot.”

At last, she walked away from the grind into everything else. “It was all at once,” she said. “I went to grad school, I got a degree, I had a baby, got married, got divorced and moved to Tucson.”

She was excited about a chance to work for a doctorate in rhetoric at the UA. When that opportunity fizzled, she again found she’d moved her life for a lost cause, but she said, “Once I had my kiddo, I wasn’t sure I wanted to be in LA, anyway.”

She did miss performing, though. “I really didn’t do any comedy all that time,” she said, “but I will tell you that I could not stop thinking about it.”

So she started turning up at Laff’s Thursday open mics, and local producers soon began inviting her into their lineups. Eventually she started her own show on the prestigious Club Congress stage. The show, “Let’s Talk About Sex, Baby”, featured a novel format. A panel of four comedians bantered around performances by two or three special guests. Club Congress suggested she might also be interested in their legendary monthly Retro Game Show, and she soon won a spot in that cast too.

When COVID-19 restrictions began to lift, Catalina Comedy producer Kenny Schied tipped Rebecca off that Arte Bella (340 N. Fourth Avenue) was interested in having an open mic. Rebecca answered the call. She and her husband Paul now host the Home Room open mic there every Sunday at 6:30 p.m. Their booked show, “Blazed and Amused,” is at 7 p.m. every fourth Tuesday. Doors are at 6:30 p.m.

The lineup for July 28 includes, besides Rebecca, one of Tucson’s favorite Phoenix comics, Leslie Barton as well as Paul Fox, Kristofer Royer, John Redding, Anthony Jenkins and Andrea Carmichael. Musical interludes are provided by keyboard artist Lew Lepley. Tickets are $10 at the door or at blazedandamusedcomedy.com.

Best known for his extravagant ponytail, Teo Gonzalez delivers hilarity, in Spanish and English, throughout the United States and South America. He will perform, in English, with Rogelio Ramos at 8 p.m. Friday, July 22, at the Rialto Theater, 318 E. Congress Street. Tickets are $49 to $129 via Ticketmaster.

Gonzalea started scoring laughs as a goalkeeper in a First Division Mexican Soccer League team. On a night out, his teammates coaxed him to take the stage with jokes he’d shared in the locker room. The club’s owner later hired him as the house comic, and Gonzalea gave up soccer to perform full time.

What’s followed has been more than 30 years of TV shows, comedy competitions, festivals and even a children’s show. Gonzalez represented Mexico in the International Humor festival in Bogotá, Colombia, six years in a row and has headlined a dozen comedy shows on Mexican national television station Televisa.

It’s Rogelio Ramos, though, who claims to be “Mexico’s greatest comedian”. Has Gonzalez returned to a competitive sport?

One Rehearsal Short does Disney

Long-running favorite musical theater ensemble, One Rehearsal Short, applies its parody magic to the music of The Magic Kingdom in Mouse House, a send up of the music of Walt Disney movies, at 6:30 p.m., Sunday, July 24, at the Children’s Theatre of Live Theatre Workshop, 3322 E. Fort Lowell Road. Tickets are $10 at https//orstix.square.site

Chris Storin is at Laff’s

Goateed, bro-signaling, openly biracial storytelling comic Chris Storin plays Laff’s Comedy Caffe this weekend, and the club assures us that the nightmare of Broadway Boulevard widening is nearly over. Doors are at 7 p.m.; showtimes are 8 and 10 p.m. Friday, July 22, and Saturday, July 23. Tickets are $15 and $20 at laffstucson.com. There’s a two-item minimum.