Young boys carrying plastic swords chase each other past girls in bright-colored clothes playing hula-hoop, weaving through the adults who are casually watching them.

The courtyard of Sonora Cohousing reverberates with the sound of children laughing and playing as their shuffling feet make soft, rhythmic beats against the grass.

Off to the side, past the cardboard castles, another young boy sits with his grandfather and the neighborhood cat.

These scenes of everyday life are played out every Tuesday—and these happy scenes belie the darker stories that have led these children and their families to Tucson.

This is Owl and Panther. The organization, sponsored by the Hopi Foundation, is a gathering of people who volunteer to help traumatized refugee children express themselves through art, writing, movement and community.

Owl and Panther's roots lie in the Sanctuary Movement, a civil initiative in Tucson during the '80s when refugees were fleeing civil wars and genocide in Central America. Refugees worried about the psychological ramifications of prolonged exposure to violence called for a program to help their children adjust to life in the United States.

Many refugees find their way to Owl and Panther through social workers; the program is so popular that there is a waiting list to get in. While the program at first largely helped Central American refugees, today, many of the participating children come from Iraq, Afghanistan, Somalia and Nepal.

"We're trying to find experiences that make people understand what they have and how far they can go," said Pellegrino. "I think when you can move in a new way and think in a new way, it all helps to feed you."

Pellegrino—an animated woman who speaks gently—and her volunteers work on programming ranging from illustration to writing, and from poetry to music.

This year, Owl and Panther teamed up with the Tucson Museum of Art, where the children met weekly to draw, paint, sculpt ceramics and write poetry. Their artwork can now be seen at the Woods Memorial Library and was on display at the Joel D. Valdez Main Library.

"In Nepal, I never see like this kind of big art museum," said Indira Dhamala, 17. "It's too big and nice."

Owl and Panther also teamed up with the Borderlands Theater this year. The Owl and Panther kids wrote short plays that were later incorporated into a production acted out by Borderlands performers. Plays ranged from whimsical childhood fantasies to illustrations of previous experiences.

Khadija Abdille, 13, from Somalia, wrote about one of her experiences involving racism at her school here in Tucson.

Her sister, Adey Abdille, 8, wrote a play about the memories of her grandmother.

Abdille participated in the performance of her play during the "Young at Art" event at the University of Arizona poetry center. She nervously walked up to the stage, hand in hand with Khadija. She grabbed a sponge and took on the role of her grandmother washing dishes. At the end of the performance, she proudly bowed to applause from the audience before rushing back to her sister and the other Owl and Panther girls.

Some of the members struggle with English. With this in mind, Pellegrino tries to provide activities that transcend the language barrier to bring members together in other ways, while also helping them to learn English.

"The words follow the activity," she said. "We do things that give them ownership of their words and their voice. Some of them have been singled out (negatively) because they had a voice. We give them a way to get their voice back."

Indira Dhamala moved to Tucson a year and a half ago from violence-stricken Nepal, where she and her family stayed in refugee camps after fleeing Bhutan.

Conditions at refugee camps were no better for Dhamala and her family than they were in Bhutan. They had to worry about more violence and looting.

"So bad vandalism. Like next to our house, they kill the people," Dhamala said. "When somebody have money, they come with gun and tell, 'Do you have money? Give it to us.' ... We were scared to live in camp."

Dhamala was also split apart from some members of her family after the transition to the camp.

"Because we are refugees, we had to live in camp, but my grandmother (was a) citizen in Nepal, so she lived in Nepal. They took my uncle 16 months in jail, and my dad for three months."

Dhamala faced new challenges in the U.S. Speaking proudly in broken English, she described the experiences she had upon arriving in Tucson.

"I came here. I didn't have any friends or family. It was so difficult for us. My brother and me, we always cry."

Shortly after arriving, Dhamala enrolled in school and joined Owl and Panther. Through Owl and Panther, Dhamala's English has improved exponentially. A poem she wrote will be featured on Sun Tran buses, and she also wrote a play that was performed by Borderlands Theater.

"I wrote about my brother and me when he was a child. We went to our grandmother house," said Dhamala. "We were just eating and drinking milk, and he just teases me all the time and makes me mad. I pushed down stairs, and he fall down. My grandparents and auntie and mom took him to the hospital. After, they came to house. I was hiding behind the house. When my mom told me to come to her, she asked, 'Why did you do that? He's just a baby!' Everybody, they made me scared. I didn't look at them, I just looked at the floor."

The sense of community is strong during the weekly Owl and Panther meetings. Refugees enjoy the company of each other, despite language barriers.

At one of the meetings, refugee children and adults made paper cranes for the victims of the devastating earthquake and tsunami in Japan. Iraqi women laughed at one another's frustration with origami. Other refugees celebrated when they successfully crafted a bird; they then went around the room to help others.

For the participants in Owl and Panther, the program goes beyond just the weekly arts and crafts activities: Owl and Panther is their refuge in Tucson, where they can unwind with friends.

"The kids have all been yanked out of one culture and thrown into another, and their families are stressed in one way or another. ... Some of them get bullied. Some will flirt with gangs. They don't all have parents who know how to support them," said Pellegrino. "Here, they get to be together in a fun and uplifting way. It's a whole two hours with people who really care about you, and you're doing something that will hopefully touch you in some way or feed you in a different way." 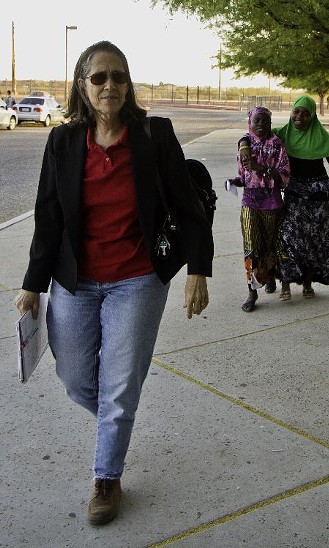