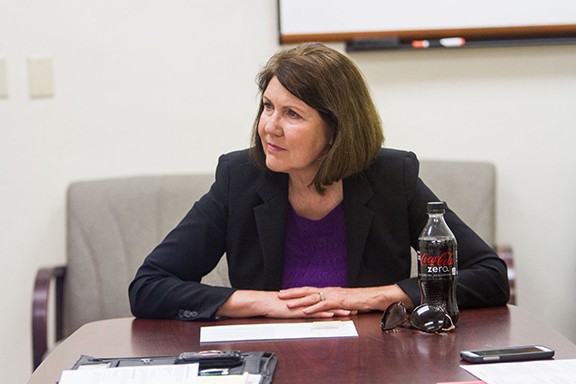 File photo
Ann Kirkpatrick benched herself last week, but still has plans for 2020.
Congresswoman Ann Kirkpatrick announced last week she was taking a leave of absence from the office to enter treatment for alcohol addiction.

"Beginning next week, I will receive treatment that I have struggled to ask for, to treat my alcohol dependence," said Kirkpatrick in a prepared statement. Kirkpatrick, 69, said the decision was precipitated by a serious fall that will require physical therapy.

Kirkpatrick spokesperson Abigail O'Brien said the congresswoman suffered cracked ribs, multiple spinal fractures and staples to close a scalp wound in a fall on the Washington subway on her way to the House of Representatives to vote to send the articles of impeachment to the U.S. Senate. She is expected to be back to work as early as next month, according to O’Brien.

”I expect (Rep. Kirkpatrick) should be back by mid-February,” said O’Brien. “We’re 100 percent in and running our campaign like we always have.”

Kirkpatrick is up for reelection following her first term representing Southern Arizona's Congressional District 2, considered one of the most competitive in the country. She previously represented Congressional District 1, which includes Oro Valley and Marana as well as Flagstaff and eastern Arizona, but left that seat for an unsuccessful effort to unseat Sen. John McCain in 2016. She relocated to Congressional District 2 to challenge Republican Martha McSally but ended up defeating Republican Lea Marquez-Peterson after McSally's decision to run for U.S. Senate left no incumbent in her House seat.

"I am finally seeking this help after struggling to do so in the past, and I am ready to admit that I, like countless other Americans, suffer from this disease," Kirkpatrick said in her statement. "Hard work and determination—which have brought me success in life—have not been enough to win this battle. Other than being a wife, mother, and grandmother, the most important job in the world to me is representing my fellow Arizonans. I know I must get better in order to do my best in each of these roles."

Kirkpatrick said her offices would continue to run smoothly in her absence.

"During my absence, my congressional offices in Washington and Arizona will be fully operational, processing all constituent requests, meetings, activities and correspondence," Kirkpatrick said. "My positions on all recorded votes will be submitted to the Congressional Record and made publicly available."

"Congresswoman Kirkpatrick is very grateful for all the outreach and support she's received," Sheridan said. "Ann wants her constituents to know that she is standing by them 100 percent and fully intends to run for reelection this fall and hopes to earn the support of all voters across her district."

Kirkpatrick enjoyed bipartisan support from both political rivals and supporters following her announcement, with Republicans such as Congressman Paul Gosar (who defeated Kirkpatrick in a congressional race in 2010) and the widow of the late John McCain, Cindy McCain, as well as Democrats such as U.S. Reps. Raul Grijalva and Tom O'Halleran expressing support.

"Alcoholism is a serious disease many Americans and their families face daily in our nation," said Martin. "It's a difficult decision for individuals to address and admit they need help. I'm happy to hear, Mrs. Kirkpatrick, is seeking professional help to combat her illness and is taking the steps necessary to recover. I wish her, and her family the best as she begins her journey to a full recovery." But Martin added earlier this week that Kirkpatrick should undergo testing to ensure she is not under the influence of alcohol when she returns to Congress.

"With respect to Rep. Kirkpatrick's assignments to powerful committees, her recent action of calling for an impeachment inquiry on 16 July 2019, her vote to impeach the president of the United States, and the great responsibility of voting to declare war, we find it appropriate and prudent to conduct periodic alcohol testing before and after all future committee meetings and all future votes," Brandon said in a letter to the Democratic leadership in the House of Representatives. "As Rep. Kirkpatrick is on the road to recovery, we wish her well, however, there is a legitimate concern as to the validity of any and all her votes thus far as a member of the 116th Congress.

Pima County Democratic Party Chair Alison Jones said the party "wishes Ann Kirkpatrick a speedy recovery from her fall. Almost every family is affected by the disease of alcoholism. We are confident Rep. Kirkpatrick, with the support of her family and friends, will get the treatment she needs while continuing to execute the duties of her office."