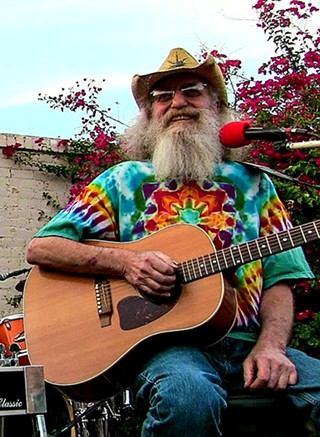 Courtesy
Randy Clamons: What a long, strange trip it’s been.

What Sam Taylor, Stefan George and Rainer Ptacek were to the blues; what Yvonne Ervin was to the jazz scene; and what David Dean of Neon Prophet still is to Tucson reggae, so was Randy Clamons to the surprisingly thriving local Grateful Dead scene that this past weekend drew hundreds of tie-dyed friends, fans and extended family members to the Hut for the first of two Saturdays dedicated to celebrating his music and his life.

As the de facto leader of the band Top Dead Center (TDC), a Dead cover band that also indulges in lots of Dylan, blues, Motown and occasional funk and soul, Randy looked and played the part as well as anyone could. And his always-free shows at the Hut, six years running now, have served as a meet-up for not just deadheads, but hippie-types of all stripes. As the crowds grew, I believe it was as much a surprise to him as anyone that this scene he had built from the ground up had taken hold the way it did.

But it was not always this way. I first met Randy in 1985 when he was a blues-rock guy fronting a very fun band called the Boomers. Like so many good bands of that era, they had a loyal but limited following, played mostly on off-nights at the clubs and generally had their best times playing parties and biker bars for family and friends. And he was definitely NOT a deadhead.

But he was a thoughtful and complex guy that, unafraid to speak his mind or act upon his beliefs, actually ran a legitimate campaign as a Libertarian candidate for the United States Senate. Three times he was on a debate stage with Democratic Sen. Dennis DeConcini and Republican candidate Pete Dunn and, according to his somewhat biased first wife Betsy, won every one of them. With a strategy that involved a serious voter registration drive among their most loyal constituency, bikers, Randy got more than 20,000 for the U.S. Senate in 1982. While the campaign of course failed, it was a huge success in proving he could make something from nothing if he believed in it enough.

So how did he become a deadhead? Somewhere along the line, he befriended Mike Begala when they were both playing in different “native” bands. Mike was a deadhead and it was 20 years ago they formed TDC. And while their only gig for a long time seemed to be a regular Thursday night show at Berkys, sometimes well attended and many times not, they found a groove and formed a bond.

From the beginning TDC was a family affair. Randy’s son Ray, one of TDC’s drummers, remembers how much he wanted to be a part of his dad’s band as early on as four years old. When Ray decided drummers he had seen were having lots more fun than the sax players he had seen (sax was his original instrument), Randy pointed to a drum set in the corner of the band room and basically said get cracking. Ray said he showed him a few basic rhythms and the rest is history.
While different bass players and gigs seemed to come and go, it was not until they found the Hut, first playing what they called Mike & Randy’s 4:20 show on Sundays (it would soon move to Saturdays) that their scene began to gel. And while the music was integral to it all, many will say Randy’s heart and desire to include as many people as possible made it so successful.

Inviting a variety of special guests—with no rehearsals!—to sit in with the band was a part of what made it special. “I have so much to thank Randy for,” said Heather Hardy, acknowledging the opportunity Randy had given her to play for a whole new audience outside of her loyal blues following.

And then there was the tweener. After being approached in the earliest days of this gig by a local songwriter/guitarist Ted Bednar about playing a few songs between sets of the band, the 4:20 tweener was born. In time, this took on a life all its own, giving dozens more musicians an opportunity to be a part of the show.

Full disclosure here: I was indeed one of those folks who got to play several different tweener sets with different ensembles and it was not just the thrill of performing but the opportunity to craft 20-minute sets and to be heard and appreciated by scores if not hundreds of new audience members. At some point, when set-up for the tweeners was getting more complicated and involved, it was suggested that perhaps TDC didn’t need the tweener anymore and that they could just put on some Grateful Dead music during the break. But Randy insisted the tweeners remain a part of the show because he knew it was an opportunity to bring more people into the tent, expanding the vibe and sharing the love.

His willingness to initiate and organize benefits, specifically for the Community Food  Bank via his annual Salem the Bear Food drive in December, will also forever be a part of his legacy. There wasn’t anyone who turned down the opportunity to play in one of the dozens of events he would organize over the years.

Begala, along with founding keyboard player John Gatty as well as the band’s faithful sound tech Rob Lutes, have all since passed, each death more heart-wrenching than the one before it. Randy’s death, while shocking in its suddenness, was not wholly unexpected, as it was clear he had been in frail health for some time.

In addition to Ray and his siblings Isabel and Ace, Randy is survived by his siblings Dean, Larry, Nancy and Jim as well as by Steven James, bass player for the band and a true brother in arms. And then of course there is Abby. Married two years but partners for an additional 12, her love and devotion to Randy, his music and his world will endure as a model of love for all those who knew them both. Their community’s the celebration of Randy’s life will continue, this Saturday at the Hut, 4:20 to 10 p.m.