Bleed the Sky points the way to madness 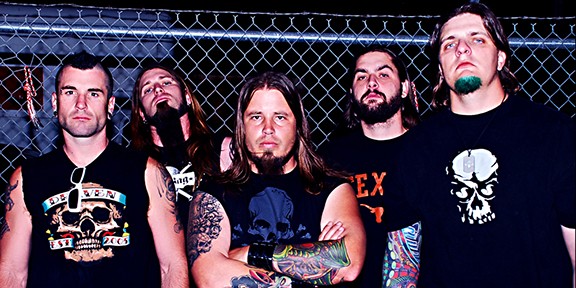 Courtesy Photo
Bang your head with Bleed the Sky

With Skinlab, Chaos and Spades & Blades
6:30 p.m. Monday, Jan. 27
Encore, 5851 E. Speedway Blvd.
$14
Orange County metalcore band Bleed the Sky had been working their asses into the ground for seven years when they called it quits in 2009. That's seven years of unglamorous touring, of the studio-van-studio-repeat cycle, leaving loved ones behind while they hit every dive in the country, maybe jumping into a high profile support slot and hoping to shift a few shirts. Eventually it worse them down and, when guitarist Rob Thornton died in '09, morale was at an all-time low.

The hiatus, as it turns out, was longer than the original lifespan of the band. They were gone for nine years before putting out the "Avengers Assemble" call in 2018. Most of the band members have families now, sure, but things have settled down to the point that they can return to Bleed the Sky re-focussed. New album This Way Lies Madness proves exactly that.

"I think it's a lot more aggressive," says frontman Noah Robinson. "I was kinda nervous with how we were going to sound and our approach to it after such a long break, but there's a big difference that I have found in things that bother you or anger driven issues when you're in your 20s and issues that are still lingering from that when you're in your late 30s, early 40s. Those are issues that we've kinda learned to tap into and address, because those things would be more sustaining and be more of a splinter that you've never gotten out."

Yeah, that's very natural. The guys were in their 20s when the band broke up; now they're in their late 30s and early 40s. Life tends to change people during those years.

"Things we wrote about lyrically on our first album seems kinda silly now," Robinson says. "It wasn't that big of a deal but we made it that big of a deal. On this record, we address issues that we didn't realize were issues until we started looking at them like, 'This is still a problem.' So it's a more mature lyrical album than previous records. It's not as fickle or whiny. Musically too—none of us stopped playing, writing, listening to music or going to shows. We were at a point in our lives where we weren't making a lot of money and didn't have a good handle on the business. Our families were starting to pay the consequences and that wasn't fair so we took a step back. Now, we're in a better headspace. We worked on this record for almost three years. We missed it the entire time so we were all happy, 10 years later, to come back together. There was never any bad blood."

In retrospect, it was inevitable that these band members would find each other again. Robinson says that Bleed the Sky is an itch that won't scratch itself and, while the guys were off working with other projects, this one is special.

"That's not something that ever goes away," he says. "When you have that long life dedicated to something that you love, it doesn't go away so there was a hole to be filled. Not to say that we weren't all perfectly content with our families and careers that we've all worked hard at, and things like that, but at the end of the day that hole was still there and nothing can fill that. It's the creative need to write and perform. So getting back together wasn't a hard decision, it was just when is it going to work? That was the key. Not if, but when. It ended up taking us a lot longer than we'd hoped."

It's all been worth it. This Way Lies Madness is an album that they're particularly pleased with, recalling the intensity of much-loved 2005 debut Paradigm in Entropy as opposed to the rather slapdash Murder the Dance sophomore from 2008.

"God, I love it," says Robinson. "Paradigm..., when we got done and listened to the master, we loved it. It was polished, tight, and exactly how we wanted it. Murder the Dance, we loved the songwriting but the production really suffered. We were out of funding and had no choice but to go forward with it. With this one, we wanted to correct every mistake that we made with Murder the Dance. Find all the strong points with Paradigm... and bring those into it as well. Our guitarist Kevin [Garcia] produced, mixed, mastered, everything. We couldn't be happier with the way it sounds."

The band might have grown up, but the lyrical subject matter on the new album is no less vivid, intense or disturbing. Probably more so.

"One major issue that we all agreed on was, we're mostly all parents now minus Austin [D'Amond, drums]," Robinson says. "There is an agreed fear that all of us have as parents that you're going to fail on some level. In the age that we live in, with digital media, predators and monsters that used to be in other towns and states, are right next door now. A lot of the potential for incidents is what we tapped into. The song 'Carnage' is about a time I was tucking my daughter into bed and she asked if monsters are real. I said, 'No.' But later I talked to my wife and said, 'But they are.' Guys that shoot a school up, fly planes into buildings, child predators. We feel like we have to protect our children by essentially lying to them."

Bleed the Sky brings this mindset to Tucson this week, and Robinson says that we can expect a high energy set.

"Even though we're older, we pride ourselves on setting a high bar for the show," he says. "Send fans walking out going, 'Holy shit that was incredible.' We don't have pyro or a fancy light show, so we rely on our performance, the stage show and our energy. The set list is heavily our first record, Paradigm... Little bit off the second record, and four new songs as well. So a good blend."

After that, the band will play together as and when they can. After all, they're grownups with grownup responsibilities. But one suspects Bleed the Sky won't ever disappear for nine years again.