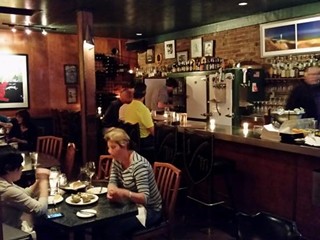 Sonoran Restaurant Week is back next month. The 10-day celebration of the best cuisine Southern Arizona has to offer features a three-course prix-fixe experience at one of more than 30 local restaurants to choose from, including numerous City of Gastronomy-certified eateries. The fun begins Oct. 2 through Oct. 11 and will set you back between $25 to $35 per three-course meal. Proceeds help support the Community Food Bank of Southern Arizona. More information to come in next week's Tucson Weekly.

La Cocina is rebranding as LaCo, a shortened version already used by the restaurant's customers and employees, which has now transformed into the acronym, Love and Community, according to the restaurant's owner, Jo Schneider. She said she has been wanting to change her restaurant's name since purchasing it 10 years ago, but didn't feel comfortable doing so. Now that the business had been closed throughout the pandemic, Schneider said it's time to make the change in name and scale back her menu. "I feel like in some ways I'm opening a new restaurant. LaCo is tentatively scheduled to reopen on Oct.15," Schneider said.

When Hotel Congress reopens to the public on Thursday, Oct. 1, the Cup Cafe's menu may look quite different to its returning customers—unless they were hanging out at the establishment around the time of Pearl Harbor. The Cup Cafe's new menu is a replica of a recently discovered 1941 menu from the hotel's former coffee shop, said the hotel's marketing director, Dalice Shepard. The menu will also combine their breakfast, lunch and dinner options and feature a few new items—like hemp tamales and vegan tacos. In addition, all menu items will be available to order day and night. The restaurant has changed its operating hours, however. They will be open serving breakfast and lunch from 7 a.m. to 2 p.m. all week long, but will only have dinner service Thursday through Saturday from 4 p.m. to 10 p.m.

One of the Old Pueblo's best places to get seafood is back with limited seating and hours. Kingfisher reopened last month for lunch and dinner Tuesday through Saturday between 11 a.m. through 10 p.m. (lunch menu ends at 4 p.m.). Reservations are required to dine-in and masks are mandatory when entering and moving around the restaurant. Kingfisher is also offering curb-side pick-up from 11 a.m. to 9 p.m. while open.

After a year of planning and development, the firefighter-owned Sentinel Peak Brewing Company recently rebranded as Firetruck Brewing Company to help build brand-identity as a company dedicated to first responders, according to co-owner Taylor Carter.

"For years, people would walk into our midtown location and see our fire truck mural on the wall," Carter said. "They would always ask, 'What's with the fire truck?' This ties who we are into the brand a little better."

Carter also said he thought rebranding would help the company build a better identity should they make the move to regional and national distribution.

While the majority of the rebranding process was straightforward, said Carter, trying to get new signage, merchandise and tap handles proved challenging.

"There's been ordering issues due to backstock and the nature of 2020. Nothing came in on time," Carter said. "We're piecing everything together in the last two weeks."