Chelle Jennings is making Tucson a sweeter place, one treat at a time 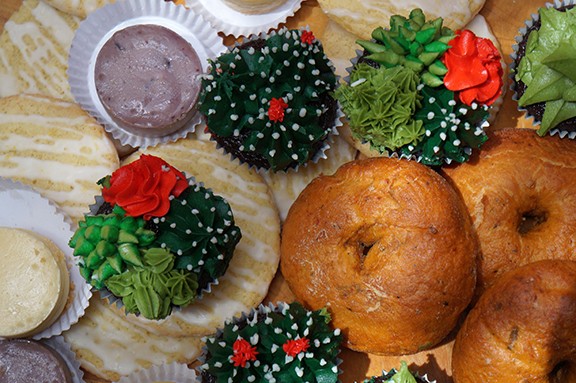 Courtesy photo
When a friend of mine handed me a lemon cookie from a catering service known as Mad Batter Bakery, I swooned over the tangy, frosted treat.

I knew I had to have more, so I reached about to the Mad Batter through the website and set up a meeting with owner Chelle Jennings in an eastside neighborhood bar to make the exchange. It felt like some weird drug deal. In a fat-kid way, I guess it kind of was.

Meeting Jennings was akin to reuniting with an old school friend or even a long-lost relative. We both grew up without brothers or sisters, we moved to Arizona to be with someone we love, Halloween is our total favorite holiday and we both harbor a deep nerd passion for all things Star Wars. One big difference between us: I can't really bake.

"I never really grew up cooking or baking," Jennings says. "Baking helped me with a bad breakup with the person I moved to Arizona for. It just helped me escape and made me not think about anything else."

Taking a cue from her grandmother's favorite Disney film, Alice in Wonderland, Jennings started Mad Batter Bakery to learn how to bake. In 2015, she started a Facebook and Snapchat page to see who was out there and who would bite. It took a while, but in that time, Jennings honed her craft and, before long, her first order came in.

"It was strawberry banana bread—something that I have never made," Jennings says. "But the customer really liked it and from there, through word of mouth, Mad Batter Bakery started to take off."

Her home bakery service took off so well that Jennings had to quit her job as a dental assistant to focus on her fledgling business full time. During slow times, Jennings not only taught herself new baking techniques and recipes, but also the art of advertising and using social media as a marketing platform. It was in that era that she developed her signature dish: cheesecakes.

"The first time I made a cheesecake it came out really nice, but then the next one was a bit of a disaster," Jennings says. "So, I just started working at it until I got it right and, now, they are easily my most popular order. Probably because I make them in mini bite-sized portions."

Outside of those nearly addictive lemon cookies (which you can custom order), Jennings brought me samples of other goodies, including the cheesecake nibs. The creamy sweetness, crumbly crust and full balance of it all made me wonder if in fact she was fibbing about not being a professional lifetime baker. The plain, blueberry and lime varieties were delicious.

Another big order for her are cupcakes, an obvious choice for grad parties and weddings (outside of the ornate tiered cake, which Jennings can do as well). The ones she brought were decorated like desert cactus and saguaros, which were just as fun to look at as to eat.

With the growing success of Mad Batter, I wanted to know if she had any plans to open an actual retail bakery or at least sell at farmer's markets.

"I did an event once where the client had me make 800 samples, but then only 20 people showed up," she says. "Huge, huge loss. Plus, farmer's markets are really hard work and with six months being in 100-degree weather, my stuff wouldn't do too well. For now, I'm just focusing on custom orders and more intimate events. But having my own bakery? You never know."

Jennings has been featured on local TV shows demonstrating her skills with holiday-themed cupcakes, her specialty being Halloween. The Southern Arizona Arts and Culture Alliance has tapped her to teach baking at the upcoming Catalyst Creative Maker Space set to open in the Tucson Mall later this year. It appears that this Seattle transplant is now getting lots of love from her adopted city.

"The best is when Garrett's Family Steakhouse asked me last year to provide them with all of the pies and cakes that they serve," Jennings says. "It's amazing to see a business I started because I couldn't sleep grow like this. I'm so grateful."