Call it what you will, but a small café in Sonoita is serving some big flavors 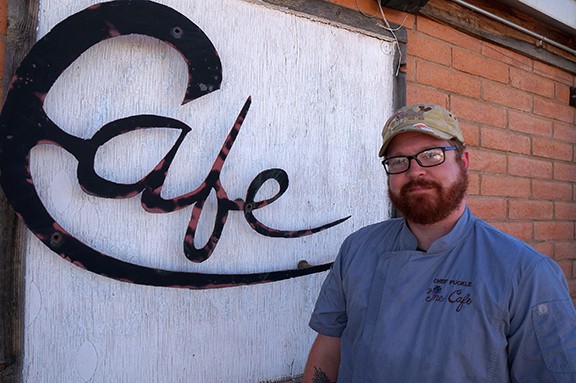 So, which is it, I asked? Is this the Café Sonoita? Puckle's Place? Or is it simply called The Café because it's literally the only food game on the scenic stretch of Highway 82 in Sonoita?

Chef and owner Adam Puckle assured me that all three titles work. Online and in most agreements, his restaurant is known as Café Sonoita. But the locals have always just referred to it as The Café, because that's what it has been for decades. But when Puckle took it over, some folks—chef included—gave it the handle Puckle's Place. Honestly, it doesn't matter what you call it because the food here is what you'll be talking about anyway. That and the sweeping view of Southern Arizona, almost completely unaffected by man-made obstructions. Just pure desert landscape. If those two enticements don't get you down there, then my job as a food writer has been all in vain.

It was Puckle's sample dish at the recent Iron Chef Tucson's meet and greet that raised a keen eyebrow. He concocted a slider constructed out of 25 percent lamb/75 percent beef, with sweet raspberries, tart green apple, nutty runny brie cheese and sharp onions. It was magnificent, albeit not enough to get him into the competition. Upon visiting his place, or café, I learned that he had gotten into the cooking front at a rather young age.

"I was around 11 when my mom encouraged me to try and cook a meal for our family," he said. "It was fried chicken, mac 'n' cheese and corn. For some reason I thought that everything on the plate had to be the same color. By the time I was 16, it became pretty obvious that I was really interested in cooking. So, I started taking classes up in Tucson."

Originally from Sierra Vista, Puckle moved with his family to Sonoita when he was 6. While growing up, there weren't many options for dining out. A steakhouse and an upscale Italian were the main choices. That, and, of course, the Café. After receiving a degree in hotel and restaurant management from NAU, Puckle found an internship at the Marriott in Palm Springs.

"In less than a year I was their food services manager," Puckle recalls. "Here I was, this kid telling people twice my age what to do. It was a big learning experience. But it wasn't for me."

Puckle then returned home and studied culinary arts through Pima College. Afterwards, he came back to Sonoita and took over the Café at the tender age of 23. Which was actually called Café Sonoita. But the locals just called it the Café. You get the picture.

"When I moved in this place was a wreck," Puckle notes. "With help from my family, we put a lot of time and money into expanding the patio, getting new furniture and creating a menu that would be a draw for people outside of the Sonoita city limits." 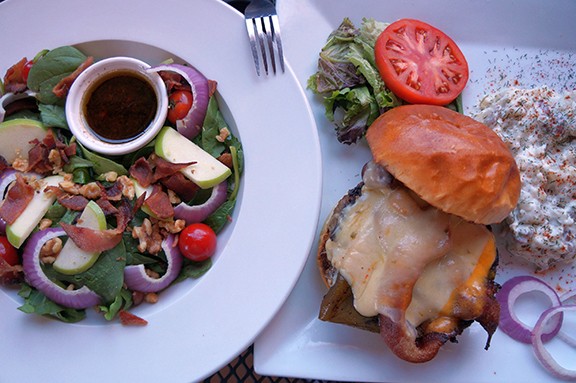 Puckle listened to his community. He wanted to create not only a space that was inviting, but food as well. Through time and testing, Puckle developed dishes into what he likes to refer to as "New American," meaning non-traditional spins on classic comfort food staples.

"For example, our customers really wanted a meatloaf. Which is fine. But we would do something to it like add chipotles and bacon or finish it off with a tamarind barbecue sauce. I like to take those traditional ideas and transform them into something that is truly unique."

Puckle's specialty, much like those sliders, are burgers. There is a rotating blend called the "A.P.E." (Adam Puckle Experience), which changes on the regular depending on what he can get fresh. His sandwiches also change depending on available ingredients. One favorite was a fried scallop po' boy with house-made aioli and crunchy slaw. But there is always a switch up, so don't be disappointed if that option isn't there when you visit. At night, you can enjoy specialties such as a Mediterranean-inspired pasta dish or hearty prime rib.

This is pure belly-filling and heart-warming eating. Because after a long day hiking the trails or mountain biking on old jeep roads or exploring other wonders of Sonoita, all you will want to do is ease back on that patio, enjoy a glass (or two) of local wine or beer and chow down on delicious fare. Sonoita, and the rest of us, is lucky to have a chef such as Puckle around and even luckier to have a joint like The Café to call our own.

Or is it Café Sonoita? Puckle's Place? Whatever.