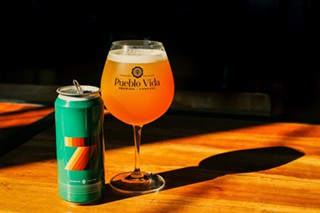 More than a dozen craft breweries call Tucson home. Despite this, downtown’s Pueblo Vida Brewing has never been forced to differentiate themselves in order to survive—it just comes naturally.

Last weekend, Pueblo Vida Brewing celebrated their seventh anniversary much in the same way they’ve always conducted their business: hosting community events and collaborating with other Tucson creatives. If you don’t recognize Pueblo Vida for the vibrant artwork on their cans, you may have tasted one of their craft beers which often blend citrus and hoppy flavors.

“We took a really collaborative approach for our anniversary this year, because we couldn’t do that for the last year and a half,” said Pueblo Vida Brewing founder Linette Antillon. “We just wanted to do some fun stuff with our friends.”

Pueblo Vida (115 E. Broadway Blvd.) focuses on “thought-provoking sips,” and the specialty beers for their anniversary highlight that dedication: a sour beer infused with hibiscus tea and watermelon notes, a stout mixed with coffee and aged in whiskey barrels, a triple IPA with multiple citrus notes and more. These specialty beers involved collaborations with Tucson’s Presta Coffee Roasters, Transit Tea, and Hamilton Distillers.

“For the ‘De La Tierra,’ we aged cold brew coffee in the barrels and then transferred that to the beer. So it’s a unique take on the traditional whisky barrel-aged stout,” Antillon said. “It’s still boozy, but it’s very decadent and turned out really nice.”

Beyond the collaborative craft beers, Pueblo Vida’s anniversary celebration included guided tastings, themed parties, yoga, a bike ride, and tie-dye T-shirt making, all as a thank you to the customers and staff that supported them over the past seven years.

As the anniversary approached, Antillon and her staff reflected on why Pueblo Vida has survived for seven years and through a pandemic, considering they have no outdoor space at their downtown location. Antillon narrowed their success down to three reasons.

“First, our staff is always here with a friendly attitude and positive vibes. I can’t ask for better people,” she said. “The second is all these partners that we get to collaborate with and share ideas with. There are so many around town in the beer world that support each other, and really have become great friends over the past seven years. And the third is how amazing our customers are. Over this last year and a half, they truly showed us the power of their support. The fact they still came in and ordered from a to-go window. They’re so freaking amazing.”

Antillon says over the past seven years, she’s seen marriages, new children, promotions and retirements of Pueblo Vida’s customers. This surprised her, as she initially figured customers would “come in and out” and not be as relationship-driven as they have been. This same sense of community is shared by craft brewers throughout Tucson, some of whom participated in the anniversary.

“We all support each other,” Antillon said. “There’s not a sense of competition where we’re trying to out-do each other. We constantly work together. And Tucson in general has a small town in a big city feeling. It’s so unique, and I think that helps with it as well. The community is great both because of the beer-makers and the customers who support them.”

“We’ve always just strived to do things we find interesting and fun. We’re always looking for unique ways to create new products,” Antillon said. “Even with that imperial stout, which we’re calling De La Tierra, it’s such a unique way to approach beer. I’m sure other people have done it before, but it’s a different way to approach that style. That’s the kind of thing we tend to do that makes us unique.”

Looking ahead, Antillon says Pueblo Vida will continue to put their beer first, but they do have some changes in mind.

“We’re going to continue doing a lot of the things that have made us successful so far, which mainly is focusing on the beer,” Antillon said. “But we’d love to have a location with an outside area. That’s been kind of a hurdle, especially over the past year. It’d be great to have a place where we can enjoy Tucson’s beautiful weather. That’s something I’m looking forward to.”